Ylva Källström-Eklund was an illustrator of children’s books, textbooks and advertisements. Her illustrations captured the spirit of the times, and from decorative fairy tale illustrations, they developed into the contemporary realism of Nu läser vi, the textbook that inspired a whole generation of Swedish schoolchildren in the 1970s to read.

Ylva Källström-Eklund was born in 1933 and grew up in a villa in the middle-class Stockholm suburb of Bromma. She started drawing early on and “Lill-Ylva” sent drawings to the daily newspapers. The major daily newspaper Svenska Dagbladet in 1940 included drawings by her in ”Veckans bästa från läsekretsen”. They showed children playing in the snow in front of her childhood home – a functional-style house in Ekebyvägen. Early dreams about fashion led her to a year-long needlework course at Femina school of needlework, but she later chose the illustrator course at Anders Beckman’s school (now Beckmans Designhögskola), which she attended in 1951–1954. Thereafter, she worked as an illustrator and cover-maker at Esselte publishers in 1954–1957. Her book covers in an abstract, rhythmic style have been preserved.

At Beckmans, she met Thorild Eklund, later an autodidact interior designer and culture historian. They married in 1956 and moved to Uppsala. Life in the country attracted them and in 1959 they moved to Ekeby north of Uppsala where they rented an older house near the river Fyrisån. They had no hot water or TV, but eventually a refrigerator and washing machine. There were antiques in all the rooms, recordings of Bach, blues and the Beatles, African art, books everywhere and a chaise-longue with William Morris fabric in front of the tiled stove. Ylva Källström-Eklund collected ABC books and the classics of the fairy tale world were ubiquitous: Bland tomtar och troll, Tove Jansson, Astrid Lindgren, Elsa Beskow and John Bauer, but also the more dreamlike Alice in Wonderland och Edward Lear’s nonsense world. Ottilia Adelborg was a favourite. Ylva Källström-Eklund’s atelier was housed in a former labourer’s cottage near the main house. There was a nice smell of ink (Pelikan nr 17), india rubber, pencil lead and tubes of paint smeared out on paper. A pencil sharpener with a handle was screwed onto the edge of the table. The sound of a razorblade scraping off inked lines that were wrong blended in with the P1 programme on the radio.

Ylva Källström-Eklund’s style developed during the 1960s. Her manner became freer with flowing brushwork and oily crayons, among others in Edith Unnerstad’s book Två små fnissor from 1966. Strong colours turned up when the developing Swedish social system was depicted in children’s books, for example in Hans Peterson’s books about roadworks, house-building and bridge construction, with happy workers and blocks of high-rise flats against blue watercolour skies. Ylva Källström-Eklund studied machines in roadworks and ordered catalogues. Her stories were filled with reality, but with a twist of humour and graphic delight; a joyous rhythm that was all her own. Dumper-trucks, caterpillars and excavators have probably never appeared happier than in her illustrations. In Karin Nyman’s Jag kan köra alla bilar and Jag kan laga alla bilar from 1965 and 1971 respectively, motor culture acquired its own boy mechanic who helps modern mothers in trendy Marimekko clothes. The car models were drawn from car brochures. The assignments taken on broadened: a cookery book with dishes from the various Swedish provinces; textile prints for Gamlestaden, among them Christmas tablecloths; Christmas calendars for the food chain ICA; menus for Scandinavian Airlines (SAS); record covers and song books for the children’s song writer Gullan Bornemark. The figure Herr Gårman, from 1967, drawn for Gullan Bornemark’s traffic book for children, was a hybrid of a school policeman and an astronaut, a new kind of fairytale figure at the time of the race to the moon and the changeover in Sweden to driving on the right. Ylva Källström-Eklund’s method was to read the manuscript aloud to her children, and thus discover the illustrations. “I watch the children when I read for them. Turn over the page in the story book. If I see an expectant expression in the children’s eyes then I understand that they are experiencing the story intensely. Then I do a drawing”, she said when Upsala Nya Tidning visited her in her atelier in June 1967.

The family lived the economically jerky life of freelancers, shopping on credit in the local grocer’s in the village and sometimes having to wait for money to arrive before taking holidays. About five books a year were what she managed to illustrate. Summers were the most intensive working periods since the books were to be printed in time for the autumn season. She often became friends with the authors, the editors and the people at the publishers’. She had contact by telephone, letters and conversations with the authors Stina Borrman, Edith Unnerstad, Kjersti Matthis, Inger Svennö-Skote and Bengta Olsson. Hans Peterson and Lennart Hellsing came to tea. The illustrator Fibben Hald, a classmate from the time at Beckmans, was a good friend.

In 1970, the series of textbooks Nu läser vi came out, illustrated by Ylva Källström-Eklund using a technique with black contours and coloured inks that made the drawings almost luminous. Reading was lifted to a modern, contemporary level. Children learned to spell with Tor in a stripy t-shirt and trainers and to read with Lena in pigtails and yellow jeans. Mother had a yellow overall and Father baked bread and wore a duffle coat. In some ways, Ylva Källström-Eklund’s own life and personality were captured in the pictures in those readers: inventive, playful, loaded with optimism and colours, like the felt-tip pens that she always had close by her.

Ylva Källström-Eklund’s illustrations were also spread internationally. About 30 books with her illustrations were translated to the Nordic languages and to German, English and even Japanese. In time, the market became more difficult for illustrators who drew by hand. Photographs began replacing drawings. In the 1980s, she worked with what she had been trained for: advertising, for among others the Uppsala municipality and county council. She illustrated a book on Carl von Linné, published folders, postcards and various motifs, first and foremost the “Uppsala poster”, a graphically inventive view over the cultural city. The poster has recently been reprinted.

Her professional life was interrupted by illness and Ylva Källström-Eklund died in the spring of 1988 in cancer, only 55 years old. In 2016 the wallpaper manufacturer Sandberg Wallpaper adopted some of her patterns and drawings and wallpaper designs in the collection Signatur, as one of four women designers. 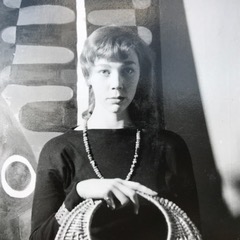