Jenny Hamrin was a teacher and the principal of the girls’ school Umeå elementarläroverk för flickor in 1883–1923.

Jenny Hamrin was the daughter of Johan Olof Hamrin, a bailiff, and Olivia Helena Hamrin. She was their ninth child and she had seventeen siblings in all. Their mother died in 1875, not yet 44 years old, during the birth of the last child. Most of the children reached adulthood but several were sickly and died young. Their father died in 1886 after which Jenny Hamrin lived with her sisters. Jenny Hamrin’s care for her sickly sisters expressed itself not only in her living with them until their deaths but also in sojourns at Söderköping’s spa during the 1880s to strengthen their health if possible. She probably also had a certain economic responsibility for them since the family went bankrupt after their father’s death.

Jenny Hamrin grew up outside the town of Umeå and was taught at home by teachers employed by her parents. She probably also attended the girls’ school that had already been established in 1871 by the elementary schoolmistress Ida Schugge from Stockholm. Jenny Hamrin, with several of her siblings, was given the opportunity of studying and she, like Ida Schugge, was educated at the teacher training college for schoolmistresses in Stockholm: Högre lärarinneseminariet. During her period of studies, she lived with one of her brothers, Ossian Hamrin, who was an actor at the theatre Dramaten. She qualified in 1881 after which she moved back to Umeå where she offered her services as a private teacher.

In 1883 she accepted a position as a teacher at the Umeå elementarläroverk för flickor. The school was then still quite small with perhaps about sixty pupils. The year after the fire, 1889, she was made principal. During her time as principal, both the school and Jenny Hamrin became established in the town and the number of pupils grew considerably. When Jenny Hamrin retired, the school had about 300 pupils. The school developed organisationally too, after it became possible in 1909 for girls to take a higher examination than previously. Jenny Hamrin communicated to her pupils that they not only educated themselves to gain knowledge and skills, but also so that the knowledge and skills acquired should be useful and pleasing. And at school, in her opinion, it was their teachers whom the children could please by being good pupils. Jenny Hamrin’s way of taking on the assignment of principal had been characterised by a sense of duty, order and authority in relation to both parents and pupils, according to her posthumous reputation.

Jenny Hamrin became well known and respected in the town. When women were allowed election to the town council in 1910, Jenny Hamrin was asked by the town’s suffrage association whether she could consider being a candidate for the conservative party in the by-election that was due to be held in the spring that year. She declined however. Her conservative political sympathies had previously been expressed in her involvement from 1890 in the local defence committee of Swedish women (Svenska kvinnoföreningen till fosterlandets försvar), of which the woman who replaced Jenny Hamrin in the by-election, Helena Ljungberg, was also a member. Jenny Hamrin was also a member of the board of the reading association that had been established in 1902, that was linked to the library in the grammar school’s premises. She made at least two journeys abroad of which one was a study trip to England, paid for by a travel scholarship awarded her by the Grammar School Board in 1906. A few years later, she visited Berlin with a younger friend.

At her last speech day before her retirement, as noted also by the local newspaper Umebladet, the great significance that Jenny Hamrin had had for a good working climate at the school was emphasised, and that it was her “competent personality, that had given the school its character of credibility”. Jenny Hamrin awarded prizes and scholarships after which she solemnly but briefly thanked both pupils and colleagues with whom she had worked for such a long time. At this event, her community involvement was rewarded when she was decorated with H. M. The King's Medal in gold of the eighth degree for civic merit.

The year after her retirement in 1924, Jenny Hamrin moved to Kungsholmen in Stockholm where several of her siblings were living. When she died at the age of 70, only two of her 17 siblings were still alive. At her funeral at the Northern Crematorium in Stockholm, Anna Grönfeldt from Umeå, a lecturer at the elementary teacher training college, member of the girls’ school board, and previous secretary in the suffrage association gave a speech.

Jenny Hamrin died in 1932. She lies buried with her parents and twelve of her siblings in the Hamrin family grave at the Western Cemetery in Umeå. Kerstin Thörn 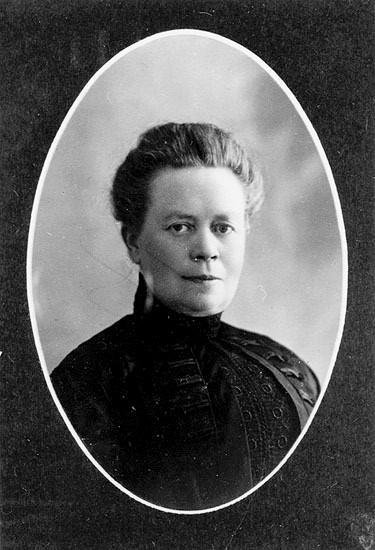