Jenny Nyström was an artist and an illustrator. She was the first woman in Sweden to be awarded a royal medal for her historically-themed painting. Her legacy was established by the popularity of her depictions of “tomte” (a mythological creature often associated with Christmas).

Jenny Nyström was born in Kalmar. She was the daughter of the cantor and schoolteacher Daniel Nyström and his wife Anette Bergendahl. Jenny Nyström was the third of five children, and she was a lively and creative youngster. When she was interviewed she always reflected on the joyful childhood years spent in an idyllic Kalmar. Jenny Nyström was surrounded by many caring family members, who all contributed to an atmosphere of comfort and trust. When she was very young she lived with her own family, her maternal grandparents, two maternal aunts and her maternal great grandmother. Jenny’s father was responsible for her education and training whilst her mother used to tell her bedtime stories that were so vivid she often believed them to be true when she awoke the next morning.

In 1863 Daniel Nyström and his family moved to Majorna in Gothenburg. To Jenny the 30 November 1863 was a day of great sorrow which she spent saying farewell to her friends and acquaintances. Before departing she walked around the areas which were familiar to her, imprinting images of people and the surroundings on her memory. The Nyström’s maid, Karin Johansdotter, accompanied the family to Gothenburg, and when Jenny, many years later, gave birth to her son Curt, Karin moved in with the Nyström Stoopendaal family in Stockholm to help out with housework and childcare.

While living in Gothenburg Jenny Nyström first attended Mrs Natt och Dag’s school before going on to attend the Kjellberg school for girls. In 1869 she began to study at the Gothenburg museum art school and it was one of her teachers there, Fredrik Wohlfart, who inspired her to paint images of “tomte”. In 1871, as Jenny was sitting and drawing in Gothenburg art museum, she was noticed by regional governor Albert Ehrensvärd. He invited her to Stockholm to visit art galleries and to go to the Nationalmuseum there. She was subsequently introduced to Christoffer Boklund, professor at the Stockholm Royal Academy of Fine Arts. That same year Viktor Rydberg’s story Lille Viggs äventyr på julafton was published in the Christmas edition of Göteborgs Handels- och Sjöfarts-Tidning. Jenny Nyström liked the story so much that she drew eight illustrations for it. They were then passed on to the editor-in-chief at the paper, who in turn showed them to the author. Rydberg also liked them and sent them on to Bonniers where, however, they remained unused. Jenny Nyström sought the return of her drawings and in the end the book was published by Torsten Hedlund’s publishing company in 1875.

In August 1873 Jenny Nyström enrolled at the Academy of Fine Arts in Stockholm and came to spend eight years as a student there. She was not from a wealthy background and had to contribute to her own upkeep, in part by selling subscriptions for Ny Illustrerad Tidning, for which she also supplied illustrations. She also had several patrons in Gothenburg. One of them was the aforementioned Albert Ehrensvärd, who ensured that she received 100 kroner each month from 1 April 1874 onwards, as long as she was a student at the Academy. Another patron, the wholesale merchant James Dickson, actually funded her studies for a certain period. In 1876 she became acquainted with the treasurer Wilhelm Berg, who became her factor. She also received an annual stipend from the Academy from 1877 onwards. The peak achievement of her period at the Academy was in 1881 when she was received the highest commendation available: the royal gold medal for her historically-themed painting Gustav Vasa inför king Hans. She did, however, have to share the commendation with Richard Hall.

Jenny Nyström also received a travel stipend which enabled her to go to Paris and perfect her painting skills there. She travelled to Paris in November 1882 and enrolled at the Académie Colarossi, as at that time the French Academy of Art was not open to female students. Two years later, in 1884, she was part of the Paris salon and exhibited her Self-portrait and Från min atelier i Paris. She made a brief visit back to Sweden in order to sell paintings and to collect her stipend. In the autumn of 1884 she became engaged to Daniel Stoopendaal, whom she had met when she was studying. She spent Christmas that year with the Scandinavian community in Grez-sur-Loing. The following year, 1885, she once again exhibited in the Paris salon with Gammal kvinna i Creuze.

Jenny Nyström moved back to Stockholm at the start of the year in 1886. She then worked as an illustrator for several different publishers. In 1887 she married Daniel Stoopendaal in the Adolf Fredrik church, and that autumn they moved into a large apartment on Tegnérgatan. We know how she furnished her studio from several watercolours she painted with her studio as the theme. In 1889, a few years after her mother had died, Jenny Nyström’s father moved in with her and her husband. Their only son, Curt, was born in June 1893.

Daniel Stoopendaal suffered from poor health and was unable to complete his studies. This left Jenny Nyström solely responsible for providing for the family through her painting. The struggle to find employment was severe. She had to sell her work to different publishers and other employers. From the 1880s onwards until her death she illustrated a large number of children’s books and historical novels. She also painted cover images for newspapers and journals. In 1911 she signed a contract to make greeting cards for Axel Eliasson’s publishing house. This meant that she needed to produce a certain number of watercolours each month as a background illustration for the cards. These illustrations gained great exposure due to the appealing nature of her drawings.

Jenny Nyström’s artwork was modern as well as humorous. It was not unusual to see a “tomte” captaining an airplane, driving a car, a truck, a motorcycle or even a train. She was not afraid to use exotic animals like elephants and giraffes as “tomte” assistants for delivering Christmas presents across Sweden. The images also contained several elements of traditional folk Christmas imagery such as Christmas goats, Christmas trees, sleighs, toboggans and more. The depiction of gender issues is clearest in her Easter imagery. One of her illustrations shows a hen with a gloved foot holding a black folder with the words “Antituppföreningen” (the anti-cockerel association). The hen is facing the cockerel portrayed as a househusband responsible for two chickens while the hen is away from home.

Jenny Nyström was also a dedicated photographer. She would sometimes photograph people who were enjoying the outdoors on Tjockö in the Stockholm archipelago, where her family would spend their summers. The photographs would later serve as models for her artwork.

In Barnbiblioteket’s Saga, 1910, a biographical entry on Jenny Nyström reveals why she chose to illustrate children’s stories: “The reason I mainly illustrate children’s books is probably because I have always loved children and have always wanted to show children something of the fair sunny land east of the sun and west of the moon, beauty which has remained in my memory from my childhood in Kalmar. Maybe now you can also understand why I prefer to draw beautiful images.” From the time her son Curt was born he often made an appearance in her paintings wearing a red skull-cap and dressed in a “kolt” (traditional outfit). She also painted a portrait of herself with Curt in 1895, which she called Mor och son. Today it is known as Vi två. Several of Jenny Nyström’s paintings have various titles. Sometimes she would give a particular image a name but when the printing company printed it they gave it a different name.

Jenny Nyström was productive right until the end. She died in her home in Stockholm on 17 January 1946. It was a peaceful passing. “It was like blowing out a candle”, according to her housekeeper. Jenny Nyström was buried at Norra cemetery beside her husband Daniel Stoopendaal and her father Daniel Nyström. 70 years after her death her cards are still being printed. Her academic artwork and her watercolours fetch high prices at the larger auction houses. 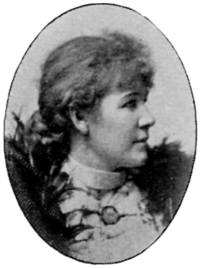