Johanna Brunsson is remembered as the master of Swedish woven art. She devoted her entire life to her woven artwork and taught weaving for almost half a century.

Johanna Brunsson was born on 24 August 1846. She was the youngest daughter of Sofia and Benjamin Brunsson, who lived in Flatebyn, Valbo Ryr parish, in southwestern Dalsland. She had three sisters and two brothers. Her father was not only a landowner but also a municipal politician. Her mother was very determined that her daughters should become accomplished housewives, and it was weaving which Johanna Brunsson revealed both an interest in and talent for from an early age.

When Johanna Brunsson was 23 years old she travelled what was barely 20 kilometres to Stigen in order to attend the weaving school led by the legendary Maria Andersson. Johanna Brunsson became her most talented student and the pair of them were awarded fine prizes at the handicrafts exhibition in Vänersborg in 1869, the same year that Johanna Brunsson arrived at Stigen. Once she had completed her training as a weaver Johanna Brunsson quickly began to teach as well and at the age of 27 she opened her very first own weaving school in Tångelanda, Högsäter. This was the first beginning of what would eventually become Johanna Brunsson’s woven arts school, which became one of the most eminent training institutions in Sweden as regards weaving.

Governor Erik Sparre, who was interested in the possibilities handicrafts offered to combat the widespread poverty in Sweden, soon realised how enterprising and talented Maria Andersson and Johanna Brunsson were. He supported both of them in their separate ventures. In 1875 Johanna Brunsson was appointed as an itinerant weaving instructor at the northern Älvsborg county handicrafts weaving school. She taught for instance in Stigen, at Koberg Castle, in Vänersborg, in Trollhättan and in Åmål. However, upon Sparre’s death in 1886 all the subsidies for weaving schools were rescinded and Johanna Brunsson became unemployed.

While she was unemployed Johanna Brunsson began to receive letters from another well-known female weaver, Nina von Engeström, who was trying to convince her to move to the Uppsala region and become her companion. During the late autumn of 1888 Johanna Brunsson settled in Agersta near Uppsala and she made an attempt at working with Nina von Engeström, but this did not work out. Barely five weeks later Johanna Brunsson moved away and then opened her own weaving school in central Uppsala a few days into the New Year. At this point she also sold some of her increasingly popular weavings to a shop in Stockholm and many people tried to convince her to move her weaving school to the capital. Due to her talent she had been able to make a name for herself in Stockholm as well after just a short period in Uppsala, and by late summer that year she took the plunge and moved her weaving school to what is now Birger Jarlsgatan 27. She built up an even bigger enterprise, to which both students and customers streamed. This expansion meant that Johanna Brunsson needed extra help and her 16-year-old niece Alma Jakobsson came to her aid from Färgelanda. This turned out to be a real success and after her aunt passed away Alma Jakobsson continued to run the weaving school.

Following her move to Stockholm Johanna Brunsson began to teach between 50 to 60 students. The first qualified female weaving instructors gained their qualifications in 1912. She also received grants for ten non-paying students every year, but she actually ended up taking about twice that number in her zeal to spread the skill of weaving as widely as possible. The majority of her students were Swedish but she also had some from other European countries, from the USA, and from Russia. At this point Johanna Brunsson was employing professional weavers and through the sales of their output, in combination with the income from course fees and grants, she was able to make enough to keep the school going. She was very careful to respect and retain the traditional and treasured Swedish designs. Her teaching included making the students go to Historiska museet (the Swedish History Museum) in order to make copies of old designs. However, she was also open to new types of designs and employed textile artists like Lyttkens, Maas, and Wallgren, both to teach and to create new designs.

Over the course of time Johanna Brunsson and her weaving school participated in a series of exhibitions at which many certificates, prizes and medals were won, for instance in Vänersborg, Borås, Jönköping, Stockholm, Göteborg, and Gävle. The newspapers were replete with praise for the exhibitions held at the school, for the school itself, and for Johanna Brunsson as an individual. Perhaps the finest award she gained was when she, aged 70 in 1916, received the royal medal Illis quorum of the fifth degree.

Johanna Brunsson also became part of the history of weaving when she developed and simplified the Ekenmark weaving technique. She was also a pioneer of and a strong advocate of reviving hand weaving at a time when industrial fabrication was completely dominating hand-made goods.

Johanna Brunsson died on 11 December 1920, aged 74. She was buried at Torp cemetery, just five kilometres from where she had been born in Valbo Ryr. As mentioned above, her niece Alma Jakobsson took over the running of her weaving enterprise after her death. Having already spent thirty years at the weaving school Alma Jakobsson was exceedingly experienced and the transition went smoothly. Alma carried on in her maternal aunt’s footsteps and further expanded the school to accommodate even more students, which at their most numbered 65. She also employed one of her time’s most famous textile artists, namely Hildegard Dinclau, who left a major artistic impression on the school during Alma Jakobsson’s period. Alma Jakobsson ran the school until her death in 1957. The following year the school was closed down, thus bringing a very important era of Swedish woven art to a close. 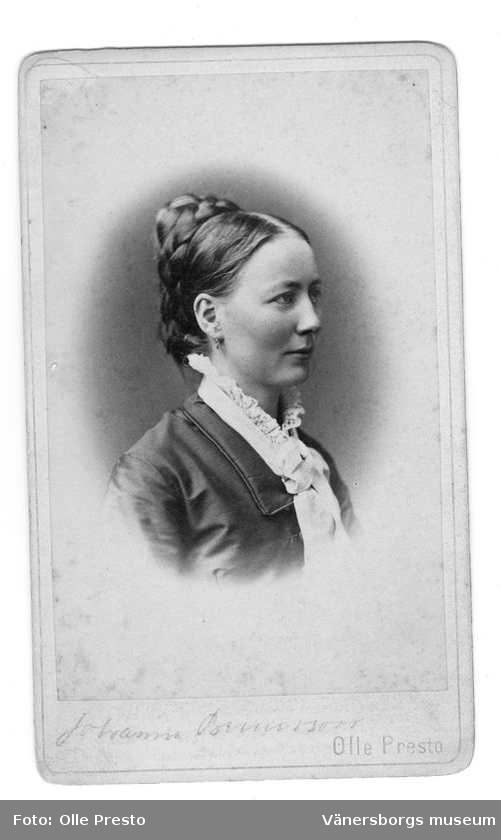