Johanna Eleonora De la Gardie was a poet and lady-in-waiting. She was a member of the educated elite of her time.

Little survives of Johanna Eleonora De la Gardie’s written output apart from a short story which was presumably written in honour of the Queen and some German-language hymns. She also had an interest in the theatre, which she shared with her sister and her cousins Aurora von Königsmarck and Amalia Wilhelmina von Königsmarck. The four of them performed the play Iphigenie in 1684. The story, written by the French playwright Jean Racine, played out against the background of the Trojan War. The Queen supported the performance and the unusual composition of the ensemble that performed it, namely an all-female cast of amateurs.

Johanna Eleonora De la Gardie’s surviving texts do not reflect the recognition she received from her contemporaries within the educated elite. The last years of her life were marked by illness. She died in 1708 and is buried in the Jacob church in Stockholm. 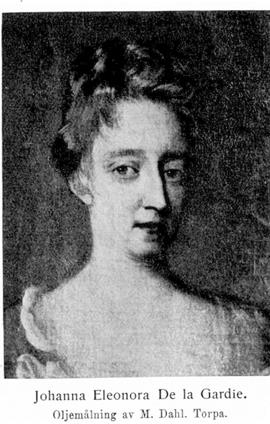