Judit Hanson was a successful businesswoman during the first half of the 1900s who created and ran a shop selling Chinese objects: Kinamagasinet. She donated Chinese objects to museums in Sweden and spread knowledge about Chinese culture.

Judit Hanson was born in 1884 in Eskilstuna where she grew up with her parents, Augusta and Ola Hanson, and her two years’ older sister, Ester Hanson. Their mother ran a bakery and their father was a metalworker. He was also a Sunday school teacher in their church congregation. It was there she came in contact with China for the first time. She was only six when she started to be interested in the country after meeting missionaries to China who were visiting the church. Several of the missionaries were women and their stories about China made a great impression on Judit Hanson.

A missionary career does not seem to have attracted Judit Hanson, however, even though she had her Christian faith and spiritual anchorage in the Mission Covenant Church of Sweden all her life. After finishing school, she started working as a pupil to a milliner in town. It was a creative job to which her great interest in needlework was well suited. Judit Hanson had however other plans. Around 1910, she travelled to New York where she found a job with an exclusive home decorating firm. Her interest for China increased further through contact with the Chinese embroideries and silks that the firm sold. After three years in New York, she returned home, just as she had promised her mother.

Back in Sweden, Judit Hanson moved in to live with her parents in Eskilstuna. With her from New York, she had a dream. She had acquired insight into an exciting business enterprise with import of fabrics and objects from China, and she wanted to start her own Chinese shop in Stockholm.

At the end of the first world war, through a good friend, Judit Hanson was given the opportunity to travel to China. She contacted the Chinese consulate in Stockholm that informed her that the only way to get to China, so soon after the war, was to travel via America. In January 1919, Judit Hanson, then 35 years of age, boarded the Bergensfjord in Kristiania (now Oslo), with its course steered straight towards New York. She continued on by ship to Honolulu and via Japan she arrived after several months’ journey in Shanghai. Judit Hanson spent almost two years in China during her first visit to the country. She purchased silks, embroideries, vases, bowls and other objects that were shipped to Sweden. In January 1921, she left Shanghai and started on the long journey by ship via Hongkong and Japan to Gothenburg.

In Stockholm, Judit Hanson opened her Chinese Emporium at Regeringsgatan 43. The shop was given a certain amount of attention in the press. In the weekly paper Idun on 11 June 1922 one could read:

“A Chinese exhibition is currently being held at the Chinese Emporium, Regeringsgatan 43, proprietor Miss Judit C. Hanson. These recently imported textiles and other Chinese objects make a very special impression with their beauty. They have been made with the absolutely finest feeling for colour, with sure technique and a carefulness in the work the equal of which one would have to search for … All these things cost so very little that any beauty-loving home whatsoever should be able to include them among their essentials of life …”

The interest for exotic goods increased in Stockholm after the end of the first world war. Judit Hanson started to acquire a circle of devoted clients among better-off Stockholmers and also from a more official direction. She delivered objects to the National Museum and fabrics for silk curtains to the new City Hall in Stockholm. Business was flourishing and the shop in Regeringsgatan soon became too cramped. Judit Hanson took over larger premises at Birger Jarlsgatan 13, where she also moved into a large apartment above the shop.

Before the move to Birger Jarlsgatan, Judit Hanson had made her second journey to China. In 1926 she travelled on the Trans-Siberian Railway. First she took the boat to Leningrad, and after that the train to Moscow, and finally the Trans-Siberian Express to Peking. There she visited the Swedish consulate and told them about her purchasing plans. She was told not to remain any longer in Peking, since there was chaos and terror there, and westerners were not welcome. She still managed to make some purchases but had in the end to leave the emergency situation. She succeeded in getting a ticket for a steamship destined for Hamburg, from where she travelled on by train to Stockholm.

The second visit to China had been much shorter than planned, but the demand was great for the Chinese Emporium’s goods, and Judit Hanson set off without further delay on her third journey to China in 1928. This time she travelled by ship via Gothenburg, London, Suez and Hong Kong to Shanghai.

Civil war was raging in China. The communists led by Mao Zedong were rebelling against the Republic of China governed by Chiang Kai-shek, and great turbulence and confusion reigned in the country. In Shanghai, a vast massacre of communists had been carried out in 1927 by Chiang Kai-shek’s forces. When Judit Hanson arrived, the railway between Peking and Shanghai was partly demolished, so it was impossible to make any new business contacts in Peking. Instead she had to make her purchases in Shanghai where the situation had calmed down somewhat. It had become much harder to ship goods out of China. For Judit Hanson, it was a long and circumstantial procedure to get her goods out of the country, but in the end they and she were safely on board a ship to Gothenburg.

Through her buying trips, Judit Hanson had become something of an expert on Chinese antiques, especially fabrics and embroideries, which were her greatest interest. She did not only build up her China Warehouse but also donated a great part of her collection in the 1930s, 1940s and 1950s to various museums, including the Jönköping County Museum, the Ethnographical Museum in Stockholm and the ethnographical section of the Swedish Museum of Natural History, also in Stockholm. The largest donation, of about 200 objects, was made to her hometown Eskilstuna’s museum. In 1954, a special room was opened there, filled with Judit Hanson’s collections from China. Among the objects was a wooden sculpture of Buddha sitting on a lotus flower, a bronze figure, a belt hook from the Han dynasty, a table in Peking lacquer and a lampshade of glass. The textile collection consisted of clothes, embroideries and tapestries, all in a dazzling wealth of colours. Among other things was an altar cloth in gold brocade and a pair of silken shoes.

During the course of the years, Judit Hanson made many Chinese contacts and friends in Sweden. She spread knowledge about Chinese culture by organising lectures about China in her home, inviting guests to eat Chinese dishes and arranging musical soirées for invited guests. She was also interested in the mission in China and supported several mission congregations in Sweden. In the invitation to Judit Hanson’s funeral, guests were encouraged to give away something to the Nordic Christian Buddhist Mission (Nordiska Kristna Buddistmissionen).

Judit Hanson did not start a family of her own, but all her life had a close relationship with her sister Ester who was still living in Eskilstuna. During the later part of her life, she lived with Sister Tora Lindeborg, who was a deaconess. Judit Hanson died in 1965, at the age of 81, in Stockholm. 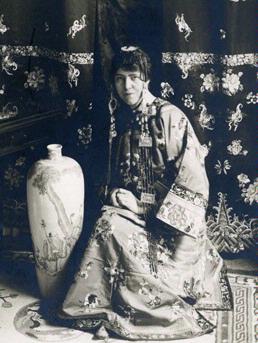