Judith Johansson was a textile artist who designed more than 400 patterns for rugs and other woven items. For 55 years she and her husband ran their business JJ Vävateljén in Knäred, Halland.

Judith Johansson was born in Trollhättan in 1916. She was the daughter of Per Johan Bengtsson, a building contractor, and his wife Olga, who was a seamstress. Judith Johansson had two younger brothers and spent a lot of time with her maternal grandmother, Olivia Eliasson, who taught her how to weave when she was a schoolgirl. Learning how to handle wool, being able to card, spin, twine, dye, weave, sew and knit was the norm at the time. Handicrafts were highly valued in Judith Johansson’s childhood home and her mother encouraged her to think for herself, to consider things carefully, and to discover the individual values of colours.

Judith Johansson met the man she went on to marry when she was 19. His name was John Johansson and had set up his own handicrafts shop in Trollhättan. At his home in Hishult he employed weaver-women to produce rugs and smaller woven items. The young couple became engaged just two weeks after they met, and married in 1937 at Trollhättan church. Their daughter Birgitta was born that same year with their second daughter, Britt-Marie, born five years later.

In 1937 the couple moved in with John Johansson’s parents in Hishult whilst waiting for their combined house and weaving-studio in Knäred — completed the following year. Judith Johansson created patterns and wove alongside the hired weavers whilst her husband hung the woven items, undertook warping, used the heddle, and sometimes tied off the ends on completed items. John also handled administrative duties and supported his wife in her artistic creativity; the couple enjoyed both a marital and a work-colleague relationship.

Around the time of the Second World War there was a dearth of material and some rag rugs were made using the remnants of paper blankets and material for uniforms. In Knäred rugs made from rabbit fur were also produced as these were popular as bedspreads. The production was extensive: pillows, runners, curtains, and drapes were made, along with fabrics, table-cloths, and napkins. The many weaving techniques used included plain weave, rosepath weave, ‘dräll’ (akin to trilix weave), monk’s belt weave, and honeycomb weave.

Judith Johansson two terms attending Textilinstitutet in Borås (now Textilhögskolan, the Swedish School of Textiles). She was hardworking, wove assiduously and produced an unusually large knotted pile rug as her student’s piece. She began to create patterns primarily for ‘röllakan’ rugs, taking her inspiration from nature. Colourful sketches were drawn on graph paper and weaver-women would then work with a foot-pedal loom with horizontal warp and batten. There was a ruler in front of them and prepared mixed coloured wefts made of pure wool which were added to the weave by hand. Judith Johansson carefully attended to the work, giving the weavers good advice whilst also being receptive to their views.

In 1951 the studio was expanded in order to house a four-metre loom. Commissions began to stream in from private individuals, warehouses, and companies. More weaver-women were hired and at its peak the business had thirteen employees. Judith Johansson, despite severe asthma, had a solid work ethic and, in addition to her weaving activities, she also ran a weaving-school which from time to time was located in a flat within the studio.

On one occasion Judith Johansson was invited to work as artistic director at the handicrafts school Capellagården, founded in 1958 by Carl Malmsten. She turned this down, however, as her studio was focusing on producing ecclesiastical weavings such as church chancel rugs, altar cloths, and chasubles. In 1965 the studio was once again expanded and providing ample space to display the largest rugs. Knäred congregation was the first to order a chancel rug for their church. This was quickly followed up by commissions from other churches, shipping companies, warehouses, and embassies.

When Judith Johansson received a commission for an ecclesiastical textile she would visit the church in question, absorb the environment, and work from her gathered impressions. She had a photographic memory and never made sketches in situ. She allowed the details and colours of the church environment to emerge in the weavings and used a carefully thought-out symbolism in her ecclesiastical work. Around 70 churches nationwide are decorated with textiles signed JJ, and Knäred church has 24 pieces.

Perhaps her most eminent commission originated from the then current king, Gustaf VI Adolf. A rug was required for Prince Eugen’s room in the Vadstena cloister dormitory. Judith Johansson was inspired by “a midsummer’s dewdrop” and created a rug called Blomsterkrans. She also produced fabric for Carl Malmsten’s furniture. She named this fabric Eugen as all the upholstery fabrics produced in the studio were given men’s names, whilst the curtain fabrics were given women’s names.

In April 1967 Judith Johansson and her friend Stina Bacos travelled to Turkey with the intention of setting up a production of rugs designed by Johansson. The project quickly came to a halt, however, due to complicated bureaucracy and due to the disparaging attitudes towards weaver-women as expressed by Turkish men.

Throughout the years Judith Johansson exhibited her textiles at various exhibitions, and these often included a weaving demonstration. When Borås Textilinstitut celebrated its jubilee in 1977 Judith Johansson’s work was represented by a large rug and in 1985 she held an exhibition which, in her own words, “provided a quick look at my life’s work” in an exhibition entitled Mattor från fyra decennier which was held at the Halland Mmuseum in Halmstad.

Despite all the favourable reviews from customers, the press, visitors, and her employees, it was not until 1983 that she received the Halland county council culture stipend. She perceived this award as not just affirmation of not just her own efforts but also that of all those who worked in her studio. She thus invited her staff to go on a trip to Italy and what was then known as Yugoslavia.

In 1988 Judith Johansson received the gold medal of Kungliga Patriotiska Sällskapet for activity which benefited the nation’s economy, but she was unable to attend the award ceremony at the Riddarhuset in person due to her many hospital stays. Her daughter Britt-Marie Glyssbo, who had taken over JJ Vävateljén in Knäred due to her mother’s failing health, attended the ceremony instead. The following year Judith Johansson received the Laholm culture prize and the culture department of the regional council documented her activities on video.

Judith Johansson often spent time in Spain due to her severe asthma. She carried on creating art until the end of her life. Just one week before she died her final ecclesiastical rug was inaugurated in Arbrå in Hälsingland. She had also started working on a pall-cover for Knäred church, which was eventually finished by her daughters and which her surviving husband and daughters subsequently donated to the church. Its first formal use was for Judith Johansson’s funeral.

Judith Johansson died in 1993. She is buried in Knäred cemetery, under a tombstone which she herself had designed. 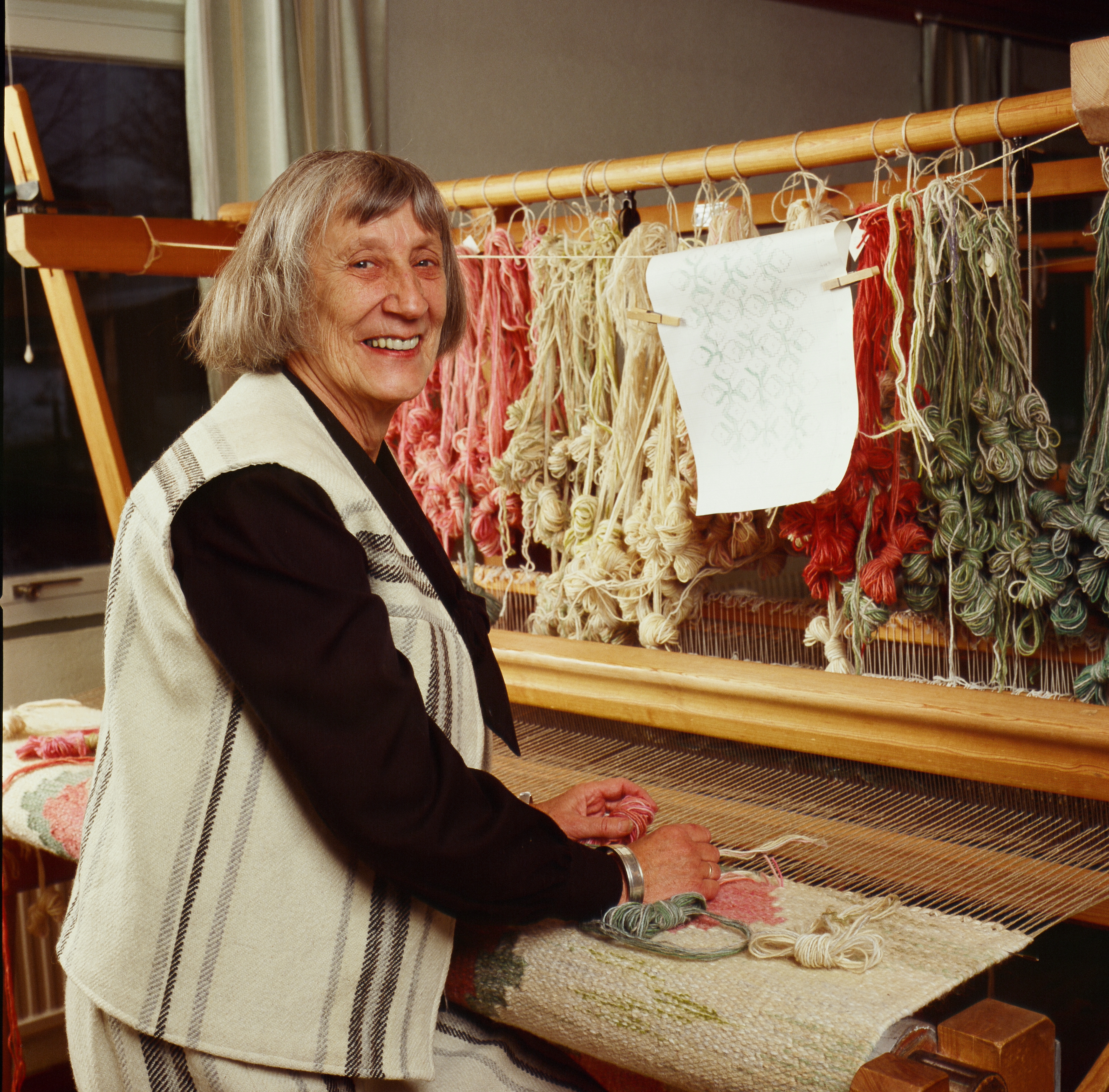