Julia Beck was mainly a painter of French landscapes, but also painted portraits and became known as a talented calligrapher. Her plein air paintings were created outdoors in nature, unlike earlier landscape paintings, where initial sketches were later reworked in the studio.

Julia Beck was born in Stockholm, where her father, Franz Beck, an immigrant from the Rhineland-Palatinate, had established a successful bookbinders. During her childhood Julia and her brother Victor helped out in the workshop and she developed her skill for calligraphic lettering while designing diplomas and luxury bindings. Victor continued in his father’s footsteps while Julia – with her family’s support – opted to become an artist.

Her training began with courses in wood engraving, decorative painting and other handicrafts at Slöjdskolan. In 1872 Julia Beck enrolled as a student in Konstakademien’s (the Royal Swedish Academy of Fine Arts) free five-year state-run art course. The Academy had started accepting female students in 1864. She was sent to the so-called Ladies’ Section, which had the same teachers as the men but classes were fewer in number and held in a separate location. In their free time, however, the “painter-girls” participated in discussions and leisure activities with the rest of the student body and also put forward their own ideas. It was Julia Beck and Julia Strömberg who together came up with the idea of a student society, which became the popular Academy club, and they were also involved in setting up the student newspaper Palettskrap (1877-1937), which reported on current events in the arts world using both images and text.

In the 1870s Paris succeeded Düsseldorf as Europe’s leading arts centre and young artists streamed there to further their training. An early success for Julia Beck was her 1880 exhibition at the annual Salon de Paris. Exhibiting at Salon de Paris was then considered a guaranteed ticket toward a continued career and Beck’s realistic self-portrait in a plume hat became much talked about for its depth of character and refined colour treatment. In 1881, at the age of 28, Julie enrolled at the private Academie Julian, where Léon Bonnat and Jean Léon Gérôme were instructors. (The French state-run art academy did not accept women until the 1890s.) Later, she switched to the school run by the Belgian Alfred Stevens as she was seeking to work with a lighter colour palette. Initially, Beck shared a studio with some fellow female artists, Hildegard Thorell, Anna Norstedt, Elisabeth Keyser and the Norwegian Harriet Backer. They lived within the limits of a strict gender order, with more room to manoeuvre than they would have had at home but not the full freedom of movement or the career opportunities of their male counterparts. As can be seen in the many portraits of friends they painted, these women formed their own circles of friends and important networks, even across state borders. Beck, for example, would for many years exhibit her work at the female Salon in Paris, the Salon de l’Union des femmes peintres et sculpteurs.

In the early 1880s, Julia Beck was one of many Swedes who were drawn to the international artists’ community in the Grez-sur-Loing village in France. The attraction of Grez lay in its idyllic surroundings and the vibrant work and social interactions it provided. The 1880s were eventful in terms of the politics of art. The radical Opponentrörelsen (opposition movement) expressed widespread dissatisfaction with Konstakademien and Beck supported the movement’s demands for reforms in training, exhibitions and the grant system. Opponentrörelsen’s exhibition “From the shores of the Seine” in spring 1885 led to Stockholm opening up to the French-inspired plein air style of painting.

It was in particular French river landscapes, which Julia Beck portrayed in her extensive but today scattered output. She painted shimmering water reflections in a romantic greyscale, which mirrored lush leafy trees and bushes and sometimes birds (as in Korpträsket, from 1884), but rarely included people. The focus of her paintings lies on nature and on how the landscape reacts to the changing light of the different phases of the day and the year, the colours representing various meditative and pensive atmospheres. The foreground foliage and reeds are reminiscent of the Japanese and Chinese calligraphy of the time and, in hindsight, the broad strokes and the pure colour palette also suggest influences of Claude Monet and impressionism.

Julia Beck travelled a lot, sometimes home to Stockholm. In 1888 she decided to settle down in the small town of Vaucresson, a few miles west of Paris. It was hardly a difficult decision. The Parisian art market was still advantageous and the French critics were favourably inclined toward Scandinavian art. From Vaucresson Julia could take the train to attractive subject material for her painting and to interested clients both in France and in the towns of Gent and Bruges in Belgium, where she also sometimes stayed for brief painting periods.

During her lifetime Julia Beck’s artistry was well appreciated in France. The peak of her career came in 1934, when she was awarded the Legion d’Honneur. She had already been awarded many medals at exhibitions in Paris and abroad. In the meantime Sweden’s art politics became increasingly marked by nepotism. For example, Julia Beck was not allowed to exhibit in the Swedish pavilion at the 1900 World’s Fair in Paris. This may be one of the reasons why she became forgotten. It was only in the 2010s that her paintings once again became appreciated both in exhibitions and in research.

Julia Beck died in Vaucresson in 1935. 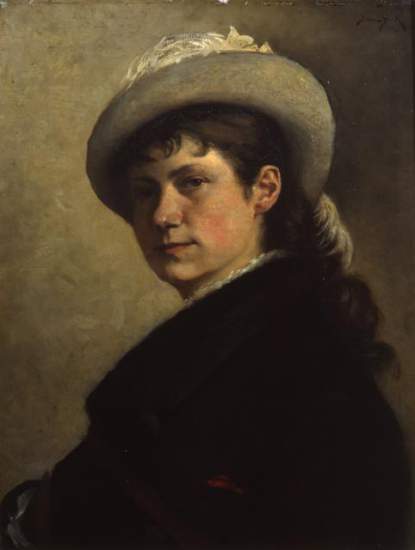