Lulu Ziegler was a Danish actress, singer and theatre director who was active for many years in Sweden.

Karen Margrethe Maria Ziegler-Andersen, later married Jensen, Knutzon and Lindqvist, was born in the Danish-Jewish upper-middle class. Her sights were set on the stage. As a theatre actress, she did not achieve much success. She was considered too short and too insignificant. It was only when she changed her style in the 1930s and became a singer of the kind who interprets rather than just performing and who uses her entire palette of expressiveness to shape her songs that she became a focus of attention for the citizens of Copenhagen. Alone in the limelight, she could seduce and enchant her audience. Early on, she socialised with and interpreted Bertolt Brecht, the German socialist dramatist who at the beginning of his career fled to the Nordic countries to escape Hitler.

The second world war reached Denmark and Lulu Ziegler was one of the most noticeable enemies of Nazism. She ran a small cabaret theatre near Kongens Nytorv that served as a pocket of resistance. It is said to have been full every evening, and soon she was caught on the enemy radar. She is said to have been on the list of the one hundred most highly prioritised enemies of Germany in Denmark, one of those who must be silenced so as not to arouse the Danes’ will to resistance.

She fled to Sweden in a rowing-boat in 1942. With her in the boat she had her two children, aged two and eight respectively, as well as her invalid husband, the director Per Knutzon. In Sweden, she built up a new home and a new theatre. During the two-year period there, she gave over 700 performances according to herself. The Swedish flagrantly anti-Nazi revue director Karl Gerhard recruited her for his shows, as did the politically more circumspect revue director Erik ”Kar de Mumma” Zetterström. Between revues, she travelled around the country and sang in the folk parks.

She was not only a refugee but also the sole family breadwinner. Disdainful tongues are said to have talked behind her back about how she on the one hand highlighted on the stage that she was just ”a little refugee lass who had come over in a tiny boat in only her flimsy underwear”, while on the other she rushed out and bought haute couture for her earnings. She always defended herself by mentioning her children’s need for nappies.

After the war, Lulu Ziegler returned to Denmark. There she continued developing her career as a singer. Immediately after the Germans had left Denmark, she was seen as a heroine; she belonged undeniably to the bold resistance. During the early 1950s however, she was faced with a kind of backlash. The Danes were tired of hearing about the horrors of the war and Lulu Ziegler appeared for some to be a person who, from a comfortable distance, nagged on about her own daring. In 1949, her husband Per Knutzon, who had been very close both as her life partner and artistic confidant, died at the age of only 52.

Sweden was to be a kind of saviour once again — or perhaps it was the case that she saved Sweden? In 1955, the Swedish stage and social culture changed drastically and in principle overnight. An old ”revue prohibition” was revoked and for the first time in forty years, it was permitted to combine alcohol consumption and stage entertainment. At the traditional old Stockholm restaurant Hamburger Börs, an ambitious investment was decided upon: the introduction of the European literary cabaret into Swedish latitudes. Nobody was considered more suited to the assignment than the Danish woman who had travelled around Sweden during the war, with stories from the world beyond the national borders.

Lulu Ziegler became a kind of hub in the daring but successful Hamburger Börs project. It was partly that she appeared on stage of course, preferably alone, with few gestures and modest expressions, but with perfumed scarves as effective stage props. It was also partly that she acted as a kind of director or perhaps even editor. She established contact with young men with literary ambitions and gave them a context – youths who had travelled in Europe, mainly France and even to the USA. Lars Forssell, Beppe Wolgers and Olle Adolphson had some of their earliest successes under the direction of Lulu Ziegler. Melodies that became classics — Forssell’s chanson interpretations ”Jag står här på ett torg” and ”Säg vad ni vill”, Wolger’s and Adolphson’s own compositions ”Okända djur” — were performed early on at Hamburger Börs.

The song lyrics and monologues had literary qualities, were poetic, political, philosophical and adult. Where Swedish stage entertainment had been mainly inoffensive, warm and inviting, a genre was now created that made demands on its audience and required active listening. Lulu Ziegler was the motor, the catalyst and the pathfinder.

Denmark became once again her base, but during the later decades of her life, she had the whole of Northern Europe as her field of work and in practice lived as a nomad. In due course, she began to spend more and more time as a theatre director. At the Gothenburg City Theatre, she produced both Edward Albee and the Afro-American beat writer LeRoi Jones in 1965, and in Odense she put on the first Danish production of the musical Cabaret in 1968.

In December 1970, a farewell show was given at the old Hamburger Börs, that during the great ”modernisation” of Stockholm was considered to have done its bit and was demolished shortly afterwards. Great Swedish show artists like Östen Warnerbring and Monica Zetterlund gave way on the stage to Lulu Ziegler, she who had to some degree paved the way for them. The show Nu ska rasket rivas was televised. Even today, anyone who so wishes can see a 67-year-old Lulu Ziegler with her brilliant stage powers intact. Alone under the spotlights, with a rose in her hand, she establishes with the self-glorification and self-distance of a diva that: ”This old lady has come to town”.

Even if Denmark was her main home, Karen Margrethe Maria Ziegler-Knutzon-Andersen, for the sake of simplicity known as Lulu, played a not insignificant role in Swedish stage history.

Lulu Ziegler died in 1973, at 70 years of age. She lies buried in Søllerød Kirkegård at Holte in Denmark. 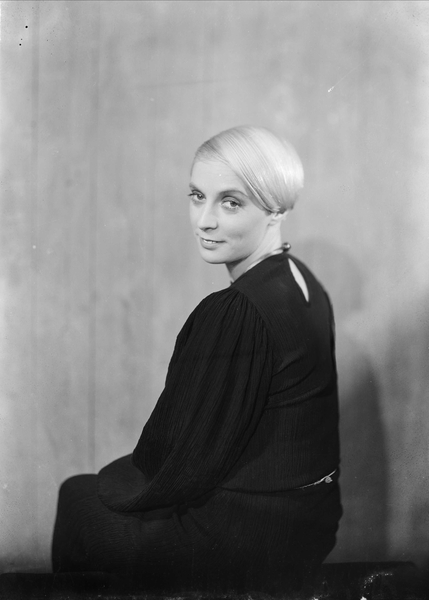