Karin Ageman was a designer, craftswoman and advertising and book illustrator. She designed and made the layouts for the catalogue Swedish Arts and Crafts. Swedish Modern for the World Exhibition in New York in 1939.

Karin Ageman was born Karin Charlotta Pettersson in 1899 in Stockholm. Her parents were Anders Gustaf Pettersson, a naval captain, and his wife Frida Charlotta. Karin Ageman was the eldest of four children, the younger ones being Karl Gustav, Elsa and Ragnhild. In the 1910s, the children and their mother took the surname Ageman.

After having completed her schooling at the State normal school for girls, Karin Ageman started art studies at the art school Högre konstindustriella skolan (HKS, now Konstfack) in Stockholm. A scholarship from the crafts association Svenska Slöjdföreningen (now Svensk Form) enabled her to make study trips to Paris in 1926 and Italy in 1929. She also studied for a time in Germany. Karin Ageman was a versatile artist. She designed posters among other things and also wallpaper, printed textiles and book covers. From 1928 until 1936 she was employed at Sveriges Litografiska Tryckerier (SLT) and Esselte’s advertising atelier.

In 1928 and some years after, Karin Ageman wrote the addresses on the diplomas of the Nobel Prize-winners. She was working at that time with the court bookbinder Frans Beck. When there was a bookbinders’ exhibition in the summer of 1930, Karin Ageman was mentioned as “a sure artistic force” for bookbinder Beck’s acclamatory addresses and guest books. At the Nationalmuseum in Stockholm, she is represented by two book covers: August Brunius’ Färg och form and Gustaf Fröding’s Stänk och flikar.

In 1936, Swedish poster designers displayed their works at an exhibition at Galerie Modern in Stockholm. The critic Y. B. on the major daily newspaper Dagens Nyheter was not impressed by the exhibition, finding that much was both ugly and tasteless. However, Karin Ageman was, according to him, one of the few who held “an artistic standard”. She was described as the master of one of the most attractive posters, that for Swedish Fruit (Svensk Frukt). For Nya Bryggeriet in Lidköping, for example, she made a sign in lithography with delightfully true-to-nature oranges with fresh green leaves and a glass containing a fizzy drink. The text LORANGA stood at the top and the advertisement is signed Karin Ageman.

The same year, she ended her employment in order to start her own atelier. She made election posters for among others the right-wing party Högerpartiet. On one poster, women are sitting doing what appears to be office work while a thick link with texts like “Pension”, “Legal period of notice” and “Sickpay” agitate for “Swedish rallying to Högern for work and welfare”. The poster “Clean up the monopoly suggestions” shows a woman sweeping with a broom as its illustration.

Karin Ageman participated at the World Exhibition in Paris in 1937. Two years later, at the World Exhibition in New York, she was given the assignment in 1939 of designing the Swedish section of the exhibition catalogue: Swedish Arts and Crafts – Swedish Modern – A Movement towards Sanity in Design. She created a large picture of a bridal couple that decorated the entrance to a homes exhibition in Eskilstuna in 1940. She and Carl-Axel Virin published the book Kurs i modeteckning, textning och layout. In the Stockholm advertising association, she was elected in 1941 to be a member of the Membership Committee.

In Osterman’s marble halls, there was an exhibition for the office and home in 1944. In connection with this, Levande väggar AB announced a competition with fourteen invited so-called utility artists, one of whom was Karin Ageman. She participated with the wallpaper De blommor och de blader, de göra mig så glader, “in a discreet and refined pattern with gourmet effects colourwise”. The competition was won by the architect Arne Jacobsen with Mai and Karin Ageman’s wallpaper was a strong second.

Karin Ageman continued designing wallpaper with names like for example Motto: Alger. The original pattern was designed in 1940. Motto means theme, and the various wallpaper patterns are related to each other. The pattern for Alger is both strict and billowing, just like aquatic plants. This wallpaper is still being produced today, in 2020, in several colours. Skogen with its flimsy, elegant decorativeness in off-white is another example of a long-standing wallpaper pattern.

In August 1945, the art college Konstfackskolan in Stockholm announced the organisation of a considerably expanded course in advertising art, advertisement composition and related advertising subjects. The teachers were Karin Ageman, Akke and Harry Kumlien, and Tord Baeckström among others. Advertisement artist Karin Ageman started as an extra permanent assistant subject teacher in applied writing, soon advanced to extra permanent subject teacher and finally to subject teacher in studies for advertising and book crafts in 1947. She held this position until her death.

Karin Ageman died in 1950 at 50 years of age. She was given her final resting place in Norra begravningsplatsen (the Northern Cemetery) in Solna. 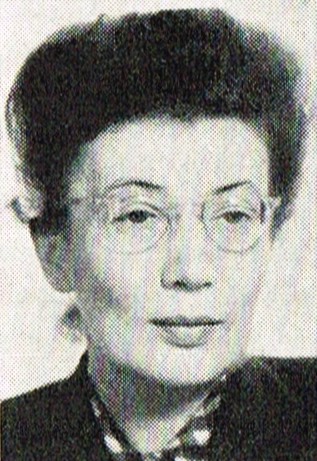