Karin Björquist was a designer, artist and artistic leader who for many years was active at the Gustavsberg porcelain factory.

Karin Björquist grew up in Säffle in the province of Värmland with four siblings. Her mother was a qualified secretary who worked first at the Monark bicycle factory near her home in Varberg. After her marriage to Karin Björquist’s father, she worked as an economist and accountant in the firm for leisure and sports articles that he started in Säffle, to which the couple moved. Their economic circumstances were good, even though the assets of an entrepreneurial family with five children were hardly unlimited. The siblings were expected to invest in safe educations with guaranteed future incomes, and when Karin Björquist wanted to move to Stockholm to educate herself as an artist her parents were cautiously sceptical. The solution was that she applied to the evening courses offered by Tekniska skolan (nowadays Konstfack). She supported herself economically through a day job as a postal worker and became a boarder at the home of a distant relative thus keeping living costs down.

Karin Björquist applied to the Gustavsberg porcelain factory at which she soon acquired a new day job as a painter of decorations. Her studies at evening school qualified her after a while for continued studies on the ordinary courses at Tekniska skolan. She started her studies there in 1945, with Edgar Böckman as her main teacher in ceramics. The same year, the school changed its name to Konstfackskolan.

She qualified in 1950 and married Lennart Lindkvist four years later, in 1954. As from 1963, he was the editor in chief of the magazine Form for a decade, and in 1973—1995 was the managing director of the association Svensk Form (Svenska Slöjdföreningen until 1976). Karin Björquist and Lennart Lindkvist had two children, their son Jonas, born in 1958, and their daughter Sara, born in 1965.

Karin Björquist was employed from 1950 as a designer and artist at the Gustavsberg porcelain factory, where she was to remain active until 1994. In 1981—1986, she was also the artistic leader of the enterprise. She designed several sets of dinnerware that were mass-produced, like Svart Ruter, Vardag and Kobolt during the 1950s. In 1970, she designed the first Gustavsberg stackable restaurant dinnerware, named BL — a plain set of dinnerware in white bone china off which many Swedes have – probably unwittingly – eaten great numbers of lunches or from which they have drunk endless cups of coffee.

For the Nobel Foundation’s ninetieth jubilee in 1991, she was given the prestigious assignment of designing a new set of dinnerware for the annual Nobel Dinner. It was in bone china and simply named Nobelservisen and it is still in use. In 1992 it received the Svensk Form association award ”Utmärkt Svensk Form”. Paradoxically, it is probably her best-known set of dinnerware, despite the fact that her greatest contribution as a designer in the main was everyday utility products for the general public.

During the 1970s, she also designed a number of glazed plant pots and dishes intended for home environments and also public places. Their characteristically concave and convex forms are typical of their times, when the postmodern interest in geometry and architectonic fragments made its breakthrough. Several of them lead the thoughts of the observer to façades and fluted columns, as if they were fragmentary elements from an antique temple.

Karin Björquist’s career coincided in time with the notice suddenly being paid by architects and building companies to the possibilities created by ceramics in public places. As early as 1961, she and the architect Kjell Abramson were given the assignment of designing the Mariatorget underground station in Stockholm. Its walls were clad in ceramic tiles in shades of burnt umber and terracotta.

The surfaces are raw, but vertically pleated in a way that gives them a tactile quality and attracts the hand to stroke them along the vertical lines. Karin Björquist was appointed to create ceramic interiors for two more larger projects in Stockholm: the new Riksbank building designed by architect Peter Celsings in 1976 at Brunkebergstorg, and the restoration of Sturebadet in 1988. She was given the title of professor in 1992, the same year she turned 65. Three years later, in 1995, the monography Karin Björquist. Formgivare was published, written by the design historians Arthur Hald and Hedvig Hedqvist, both friends of Karin Björquist.

Karin Björquist died in 2018, at 91 years of age. She is buried in the Woodland Cemetery in Stockholm. 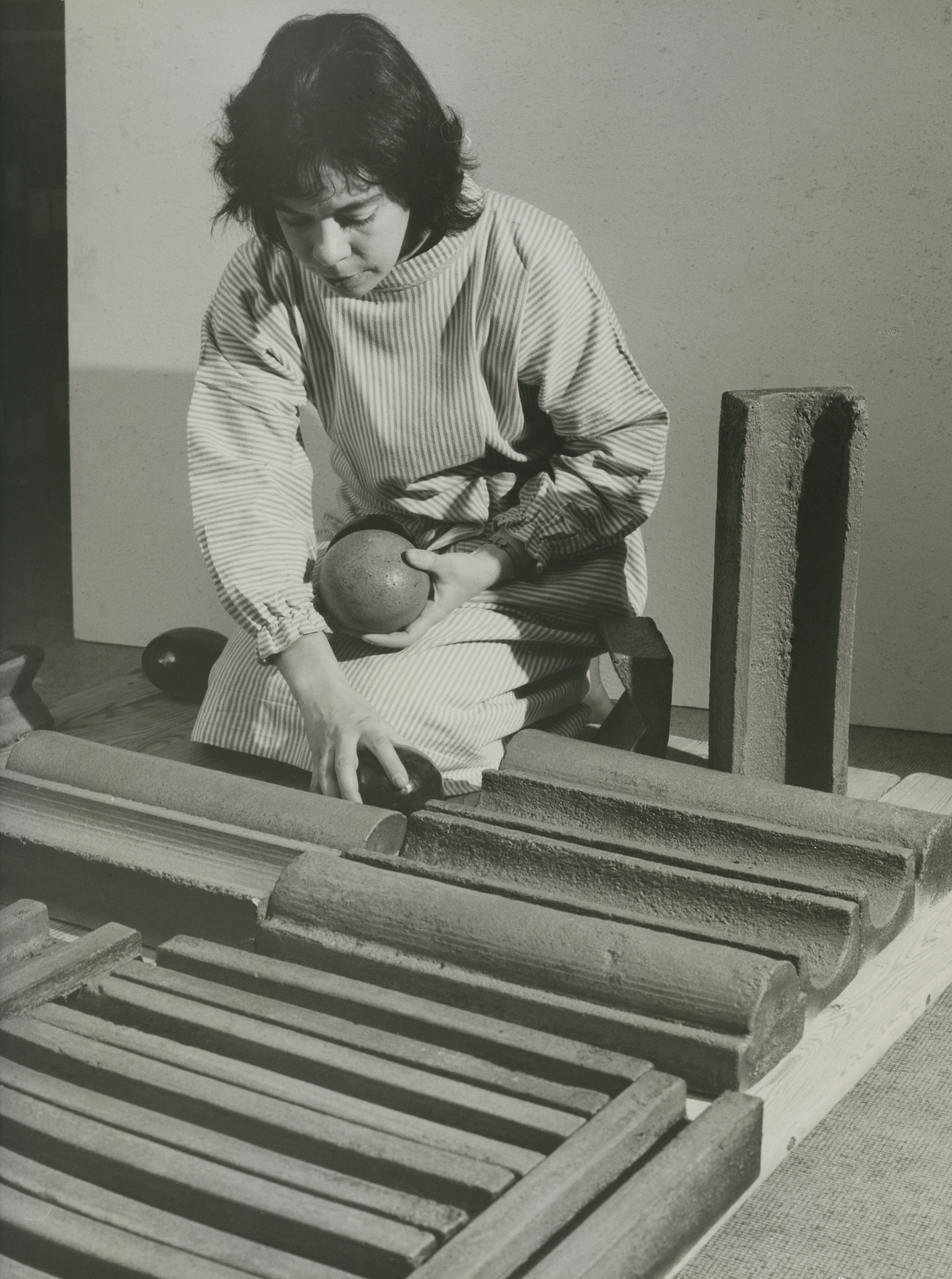