Karin Ekelund was one of the biggest Swedish film-stars of the 1940s who nevertheless retired early from her career in cinema to focus instead on becoming the first female radio producer in Sweden.

Karin Ekelund was born in Ystad in 1913. She was the daughter of Sam Ekelund, a lecturer, and his wife Anna. Karin’s father died when she was five years old. She and mother initially moved to Gothenburg, and then later to Stockholm. While they were living in the capital Karin’s mother remarried in 1925 to Karl Brynolf Napoleon Eneroth, who was a director, but he died just the following year. In 1930 Karin Ekelund, then aged 17, gained her school-leaving certificate from the Palmgren school. She had intended to train to become a doctor but that was not to be.

As a child Karin Ekelund had attended dancing lessons and learned to dance on her toes. This led to her appearing in a circus performance with children arranged by Calle Hagman in Gothenburg in 1923. Karin Ekelund dreamt of becoming a ballerina but her mother felt it would not suit her. In the summer of 1930 Karin Ekelund was persuaded to take an extra job during the ongoing Stockholm exhibition. Olof Molander was putting on a show called Det stora bygget, which had been specially written by Sigfrid Siwertz. At the same time Karin Ekelund applied to attend the school run by the Dramaten theatre, where she studied from 1930-1933. During her last year there she was the school’s top student and received acclaim for her portrayal of Cain’s daughter in Guds gröna ängar. Her screen debut was in the 1933 film Gifasvuxna döttrar after which Karin Ekelund signed a long-term contract with Europafilm. She made ten films with that company between the years of 1934-1938.

In 1934 Karin Ekelund was hired by Gösta Ekman’s Vasa theatre. Ekman would often cast her as his co-star, as he did in Peer Gynt, and Fedja. Her theatrical life continued at the Oscar theatre for the 1938-1939 season and once Malmö stadstheatre (city theatre) had opened in 1944 she worked there for a while.

During the 1930s Karin Ekelund appeared in films such as Hälsingar from 1933 and Synnöve Solbakken in 1934 in which she played the title role opposite Fritiof Billquist and Victor Sjöström. Her greatest successes came in the 1940s: first in Anders Henrikson’s 1940 film Ett brott, where Karin Ekelund played the role of Maud von Degerfelt (who was married to murder-accused Rutger, played by Evin Adolphson) and according to the unanimous reviews this was her breakthrough performance as a character-actor. The film is the best known of her films and she even gained Hollywood recognition for her acting.

Karin Ekelund had her breakthrough as a comedic actor in 1940 when she appeared in Hasse Ekman’s screwball comedy Med dej i mina armar, once again co-starring opposite Edvin Adolphson. This time he played a man who had been hit on the head by a golf ball and does not realise that he is chasing his former wife. In the 1941 comedy Lärarinna på vift Karin Ekelund played a teacher at a reputable and traditional boarding school for girls who begins to work on the side as a singer in a nightclub in Copenhagen. However, her double life is discovered and the scandal becomes public knowledge. Karin Ekelund was awarded Aftontidningen film trophy for best female performance for the 1941-1942 season for that role.

In Anders Henrikson’s 1941 film Bara en kvinna Karin Ekelund portrayed a lawyer’s wife who becomes part of a triangular love-story when a professor of art wants to paint her portrait. Henrikson both directed and acted in the film. In yet another elegant and light-hearted comedy called Som du vill ha mej, from 1943, Karin Ekelund played a woman whose husband (played by Lauritz Falk) finds his wife a little boring and tries out a revitalising injection on her. He, however, is unaware that she knows about his plan and is determined to teach him a lesson. Both Lauritz Falk and Karin Ekelund received acclaim for their performances.

In an 1944 interview titled ‘Fed up of helpless women!’ Karin Ekelund asked herself: ‘Why are we women always portrayed so helplessly by scriptwriters for the theatre and film that we always require male protection? Why is it always the male acting parts which get to create and accomplish anything?’

A year later the 1945 film Oss tjuvar emellan eller En burk ananas had its premier. This was yet another comedy albeit a rather original one. Karin Ekelund portrayed the fiancée of Lauritz Falk’s character who was a type of modern Robin Hood figure who had hidden £25,000 from a heist in a pineapple can which was being searched for by several of the film’s other characters. Karin Ekelund’s final screen performance was the 1955 love-story Så tuktas kärleken, directed by Kenne Fant, in which she acted opposite Holger Löwenadler.

At the start of her career Karin Ekelund alternated between playing farmgirls, fishergirls, and sirens until she increasingly came to play the elegant upper-class women as personified in Swedish films. She was able to combine a certain coolness and desire in her character portrayals whilst also being regal and well-proportioned. Further, there was a force and a maturity in her voice, tempered by a sensuality, integrity, and intelligence which all came to the fore. Karin Ekelund was a major star, attracted large audiences, earned a high salary, and was voted a people’s favourite. She was Sweden’s wartime film-star who was compared to international film-stars such as Irene Dunne and Carole Lombard, and she dreamt of making a film with ‘the Lubitsch touch’.

In the mid-1940s Karin Ekelund was diagnosed with cancer of the vocal chords. After her treatment she fought hard to return to her normal life and to career. Although she succeeded, in the end her voice gave out and she had to withdraw from acting. In 1963 she instead became the first fulltime female producer, and later director, for the Radio theatre. Her new career allowed her to continue making use of her interest in and her experiences from the world of theatre and cinema, and she remained there for the rest of her life.

Karin Ekelund’s first marriage was to the dentist Rudolf Levin. She later married Ragnar Sachs, who was the head of Nordiska Kompaniet (NK). She subsequently also played her part as a director’s wife, a hostess for formal hospitality dinners, and as PR for organisations including the Red Cross and Save the Children.

Karin Ekelund died in 1976. She is buried at the Norra cemetery in Solna. 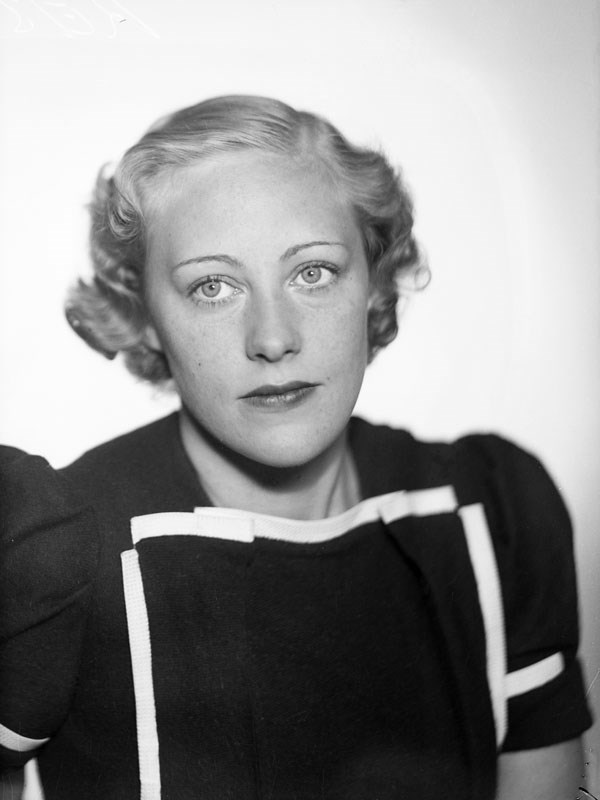