Karin Fryxell was a visual artist, an author, and a photographer. She is best known for her picture books about Sotlugg and Linlugg and other troll characters.

Karin Fryxell was born in Stockholm in 1911. She was the third and youngest child of Karl Axel and Elsa Charlotta Fryxell. Her mother’s ancestry lay in a mining family from Persberg, near Filipstad. Her father, who had been born in Karlstad, was a historian and an official who also served as the director-general of the National Board of Trade from 1913—1935. The family took great interest in history, literature, art, and music, and all these elements influenced Karin Fryxell’s childhood.

Karin Fryxell was encouraged to paint and draw from an early age and received a drawing pad as a Christmas present every year. She would fill these pads with chalk or watercolour drawings, often taking her inspiration from fairy tales. She was an avid reader as a child, including the many exciting stories found in the collection Barnbiblioteket Saga. She also travelled frequently with her parents. Once she had completed her schooling she attended art school of Edward Berggren and Gottfrid Larsson in Stockholm. There she studied painting with Berggren, sculpting with Larsson art materials with Acke Kumlien. She had a preference for portrait painting and in early 1932 she was able to travel to Paris in order to study painting at Académie Scandinave Maison Watteau, Académie de la Grande Chaumière, and Académie Colarossi respectively. In 1934, however, she fell ill with tuberculosis and was then forced to return home. She remained unwell until 1953 when she finally recovered from the illness thanks to a modern type of operation.

Following the death of her father in 1935, Karin Fryxell and her mother moved to a house which they had been constructed for them at Klinten, just outside of Filipstad. The house was designed by Karin Fryxell’s maternal aunt, Tora Öberg, who was a drawing instructor in Filipstad.

Karin Fryxell created her books on Sotlugg, Linlugg, Luddkolt, and other troll characters, during the years of 1940—1955. She both wrote the stories and illustrated them with her own photographs. For these black and white photograph she posed troll dolls, which she had made herself, on adventures in the forests of Värmland. The small trolls lived under tree roots and boulders, wandered around the soft moss, paddled on the lakes, used bows and arrows, and played the flute. They also went skiing and skating during wintertime, went on sledge-rides pulled by foxes, rode wolves and deer, and visited the Snow King’s castle at the North Pole. One of her books was situated in Skansen in Stockholm while another was situated in Africa.

Karin Fryxell used her own camera when taking photographs of Sotlugg and Linlugg. She had started taking photographs when she was 14 years old. She had purchased a new Swiss still camera in 1945 which she used for the pictures for her books. In 1948 she made a film about Sotlugg and Linnlugg in which children played the parts of the trolls and afterwards she sometimes used children as models in her photographs instead of dolls. Her dolls, of which there over 100, are now held at Klinten which can be visited in the summertime.

There is also a chapel at Klinten which was designed and decorated by Karin Fryxell. The history of this building dates back to 1921 when she attended Sunday school at the Oscar church in Stockholm. There, as a ten-year-old, she admired Emanuel Vigeland’s painted glass work. These memories stayed with her when she attended painting classes and she longed to be an ecclesiastical painter; the Klinten chapel finally allowed her to put her longing into practise. Indeed, when she returned to painting in the mid-1950s it took a religious as well as a natural-romantic form. She also wrote poetry, which was collected in an edition titled Ljusvandring: dikter 1936-1961 and published in 1962, Jord och Ande published in 1964, and an unpublished work entitled Årstider. Between 1981 and 1984 she published a three-volume work, called Boken om Anders, which was about her paternal great-grandfather, Anders Fryxell, an educator, historian, and pastor of Sunne.

Karin Fryxell’s art has been shown at over 20 solo exhibitions in various Swedish locations and some of her bigger works can be seen in both public and private collections and at a range of locations. Her surviving relatives donated more than 40 of her paintings, drawings, and books to Värmlands Museum in 2007. The Swedish portrait archive at Nationalmuseum in Stockholm also holds a number of portraits bearing her signature. Karin Fryxell’s personal archive is held at Värmlandsarkiv in Karlstad.

Karin Fryxell died in 2003. She was 92 years old. She is buried at the Eastern Cemetery in Filipstad. 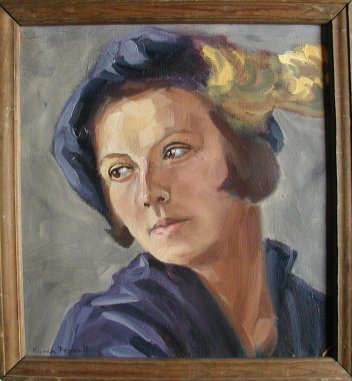