Karin Eriksson was a librarian and the first county antiquarian in the northern Swedish province of Västerbotten. She put great effort into the conservation of building monuments and cultural environments in Västerbotten.

Karin Eriksson was born Karin Gunnel Ingegerd Lundström in Stockholm in 1937. She grew up with an older and a younger brother in Vaxholm to which their parents, Hjalmar Lundström and Gunnel Lundström, née Grip, had moved. When Karin Eriksson was eleven, the family moved to Umeå where Hjalmar Lundström had been appointed as secretary to the Court of Appeal and Gunnel Lundström started working as a drawing teacher at the Umeå municipal girls’ school. After elementary school, Karin Eriksson attended the grammar school where her studies included Latin and she matriculated in 1956. Thereafter she read French and art history at Stockholm University.

Karin Eriksson had already become acquainted with Jan Eriksson at her grammar school in Umeå and they rediscovered each other after a number of years and were married in 1959 in Umeå. They settled down in Uppsala where Jan Eriksson was studying medicine. They had two daughters, born in 1960 and 1961. Jan Eriksson completed his studies in Umeå to which the couple moved in 1961. After their divorce in 1966, Karin Eriksson remained in Umeå with the children and in 1970 she married Gösta Weissglas, a cultural geographer. The couple had a daughter in 1971.

Karin Eriksson had already started studying to be a librarian in Uppsala via a correspondence course, and she continued her studies in Umeå. In 1962, she was offered work at the Västerbotten Museum in Umeå. In 1963, she was promoted and from 1966 she worked as an antiquarian. She gradually became more and more focused on building conservation. When she was promoted to first antiquarian in 1974, she started working full time on building history and conservation. She was also given the assignment of making an inventory over buildings and settings in central parts of Umeå that were worthy of conservation. During this time, she also continued her postgraduate studies, started in Uppsala. Her studies of buildings worthy of conservation was published in 1974 and the year after she completed her doctorate with the thesis Studier i Umeå stads byggnadshistoria. Her academic merits involved her in some teaching, amongst other things on the university’s cultural studies programme.

Karin Eriksson defended the older buildings in Umeå against exploitation interests from the municipality and private persons. She carried out her work very dutifully, participated in discussions and was also an active popular educator. She held innumerable lectures and led city walks under the auspices of among others the protection association Föreningen Byggnadskultur, that she had started in 1976. When the foundation Stiftelsen Helge Lindens minne was founded in 1968, she represented the Västerbotten Museum on its board and was a member of its purchasing group. She was also the chairwoman of the Västerbotten county art society in 1983–1999. After her retirement in 2001, she took charge of the foundation for the Olofsfors bruk industrial monument and was the chairwoman on its board in 2006 and 2008. She also paid great attention to the scenic route Blå vägen and the link with Umeå’s sister town Petrozavodsk that was the final eastern destination of Blå vägen. She even learned Russian to be able to communicate better with representatives from Petrozavodsk. In 1994, Karin Eriksson was awarded the Umeå culture prize, for her contributions as a cultural protector. In 2012, she was awarded the Olof Högberg plaque for her work for cultural environments in Västerbotten.

Karin Eriksson lived with cancer from 2009 but she was nevertheless involved right up to the end in what was her life’s work, caring for older buildings, their history, protection and conservation. In the autumn of 2013, she wrote two articles in the jubilee book about Umeå published in 2014 during its year as the European Capital of Culture. Karin Eriksson never stopped defending the values she thought were priceless and indispensable, and the older she got, the freer she felt to express her opinions.

Karin Eriksson died in 2014. She lies buried in the Northern Cemetery in Umeå. 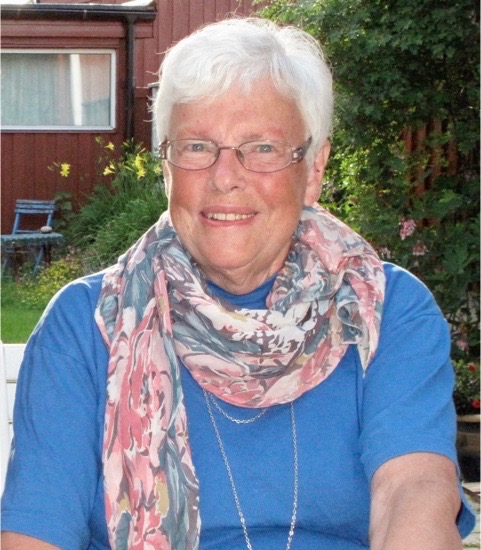