Karin Kavli was a prominent actor and the first woman to run Göteborgs stadsteater (the Gothenburg city theatre).

Karin Kavli grew up in Mariehäll in Bromma. She was the daughter of head gardener Carl Johan Karlsson and his wife Selma (née Eriksson). Karin Kavli began her education at the Sundbyberg school and then was a pupil at the Åhlinska girls’ school in Stockholm.

Karin Kavli attended the Dramaten theatre school from 1926–1929. She was given parts in major productions from her first year as a student onwards. For example, in 1927 she played the role of Hippolyta in Olof Molander’s production of the Shakespeare play A Midsummer Night's Dream. Karin Kavli had her big public breakthrough in the same year that she graduated when she performed the part of Cassandra in Aeschylus' Agamemnon at Konserthusteatern, in a production directed by Per Lindberg.

After graduation Karin Kavli found employment at Helsingborgs stadsteater but she was not there for long. Thanks to the Anders de Wahl stipend she received in 1930 Karin Kavli was able to travel abroad to further her training. Once she returned to Sweden she spent 1931 working at the Oscar theatre and then worked at various different theatres, including the Vasa theatre from 1932–1933. There one of her successes included her portrayal of the female lead in Ragnar Josephson’s Kanske en diktare in 1932. The following year Lorens Marmstedt adapted the play for the silver screen and once again Karin Kavli was hired to play the female lead.

Throughout her career Karin Kavli divided her time between the theatre and the silver screen. She regularly played major female roles in Swedish films, often with one of the great male on-screen lovers of the era, such as Georg Rydeberg and Gösta Ekman, as the lead male character. She returned to the Dramaten theatre in 1934 and went on to appear in many much-discussed roles. During the second half of the 1940s Karin Kavli also performed as a guest artist at Göteborgs stadsteater, appearing in major roles including the Daughter in Olof Molander’s production of Strindberg’s Ett drömspel, as well as Lady Macbeth in Shakespeare’s Macbeth and Blanche de Bois in Tennessee Williams’ Spårvagn till lustgården, both directed by Ingmar Bergman.

When Karin Kavli returned to Gothenburg in 1953 she took on the post of director of Göteborgs stadsteater. She became a legend in her own lifetime through that position. During her time as theatre director a series of prominent young actors became associated with the theatre, including Thommy Berggren, Keve Hjelm, and Jan-Olof Strandberg. Further, Per Oscarsson, who opened the first season as Hamlet, really put Göteborgs stadsteater on the map. Karin Kavli also introduced the work of young post-war authors into her repertoire. She put on productions of plays by “angry young” writers emerging from Britain whilst young Swedish writers, such as Sara Lidman, also had their work premiered at the theatre. An important element in Karin Kavli’s job was improving the working conditions for actors at the theatre.

Karin Kavli remained head of Göteborgs stadsteater until 1962. She then returned to acting and the Dramaten theatre where one of the roles she performed was the much-discussed Bernarda in Lorca’s Bernardas hus, directed by Bengt Ekeroth. One of her last great performances was as Grandmother in a TV-adaptation of Hjalmar Bergman’s Farmor och vår Herre.

Karin Kavli was awarded the Teaterförbundet (Swedish union for theatre, artists and media) Gösta Ekman stipend in 1942. She received the Dramaten theatre O’Neill stipend in 1979 and in 1981 she was awarded the Swedish Academy theatre prize. She also was given the royal Litteris et Artibus medal in 1978.

Karin Kavli married Knut Kavli, a Norwegian who was the director of the significant food company called Kavli. They spent many stretches of time living apart. Karin Kavli died in 1990. She is buried at Bromma cemetery. In 2001 the small square beside Göteborgs stadsteater was named after Karin Kavli. Tram number 747 also bears her name. 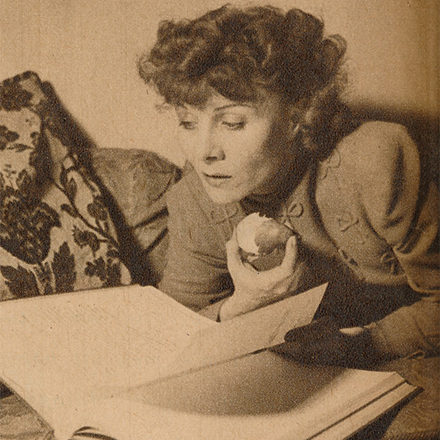