Karin Larsson is mainly known through the paintings of her husband, the artist Carl Larsson. She was portrayed in innumerable paintings as wife, mother and model, surrounded by children and family in their home at Sundborn. However the furnishings at Sundborn, which produced an environment often emphasised as the embodiment of the Swedish idyll, were largely a result of Karin Larsson’s personal efforts.

Karin Larsson was born in 1859 in Örebro but grew up in Hallsberg, where her father ran a commercial enterprise and quickly rose to become a leading personality in the region. The family was thus financially well-off and able to provide their children with a comfortable start in life. When Karin was twelve years old she was sent to Stockholm, where she divided her time between the French school and Slöjdskolan (the handicrafts school). Following a few years’ study she was accepted at Konstakademien (the Royal Swedish Academy of Fine Arts) in 1887, which had started to accept female students in 1864. Karin Larsson began at the Fruntimmersavdelningen (the women’s section), where women were taught separated from the male students. Women were able to train to be artists but female artistry was usually seen as a mere pastime, to be abandoned when a woman got married.

In 1882 Karin Larrson and some of her fellow artist friends, including Julia Beck, travelled to Paris and enrolled at Académie Colarossi. During the summer they, like many other Swedish painters and authors, made their way to the artists’ community Grez-sur-Loing near Paris. There she met Carl Larsson, who was a focal point in the artistic life of the community. That summer in Grez became the pinnacle of Karin Larsson’s artistic period as she and Carl Larsson worked side by side using the same motifs. Only a few of her works from this period have survived, including Mére Morot and Pumporna. Karin and Carl decided to get married that autumn.

Following a few years spent in artists’ circles in France the Larsson family returned to Sweden and settled in Sundborn, Dalarna. Karin Larsson’s daily circumstances prevented her from further developing her painting style. They had two children already, and these would soon be complemented by a further five. As a young mother with artistic ambitions, her home in Sundborn increasingly took on the role of Karin Larsson’s canvas. Her brush was replaced by needle and thread, her painter’s palette became woollen threads and silks. By putting all her energy into her home furnishings she created a home with an exciting colour range and new-fashioned textile designs. She was inspired by the English Arts and Crafts movement, led by William Morris, and spread decorative foliage across the upholstery. Names such as Kärlekens ros and De fyra elementen reveal that she viewed textiles as actual pieces of art, not just as a means to furnish a room. In addition to the many textile works which filled her home, she also tried to design furniture, including a functional rocking chair for the large studio, long before the functional style emerged. There was also a table and an ingenious shelf for flowers with ample space for many plants. The colour scheme was bold, consisting of a bright orange-red and green at a time when muted colours dominated in accordance with the bourgeois style of the late nineteenth century.

The Sundborn home became her life’s work. It became a complete work of art in the spirit of William Morris and Johan Ruskin. Creating an appealing environment where art, form and beauty served as the focus was thought to positively influence people’s lifestyle. Karin and Carl Larsson subscribed to a range of international magazines of which the Arts and Crafts movement’s mouthpiece The Studio probably served as the main source of inspiration. A current source of inspiration was also Ellen Key’s Skönhet för alla. Although it was an international movement, its basic ideology was the existence of a national particularism based on local building traditions and handicrafts.

Carl Larsson’s frequent travels and tasks in various places meant that Karin Larsson became responsible for the appearance of their home. She employed the labourers, carpenters and painters and made all stylistic decisions. Carl Larsson always emphasised her importance in regard to the home in his books and paintings.

The transition from painting to textile art and home furnishing was at the time viewed as an acceptable solution for female artists who had got married. Perhaps Karin Larsson was not simply forced to leave her painting behind. In creating the artist’s home she had a wide spectrum of forms of expression available to her – textiles, furniture design and interior design. These forms of art enjoyed a boom at this time and were much in vogue in artistic circles. She had the opportunity to show her strengths and to be ahead of her time. As the artist’s home emerged so did a stimulating environment for both family and friends. Through Carl Larsson’s paintings and books it also became known to the wider public.

Karin Larsson died in 1928. She is buried at Sundborn cemetery. 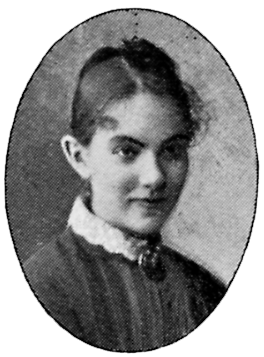