Karin Månsdotter is one of the most famous queens of Sweden. She has proved to be a source of fascination to many writers and artists.

Karin Månsdotter came from a simple background. Little is known of her childhood and family relations because she was not a member of a noble family. Her parents were called Ingrid and Måns. Her father was a prison guard. It is likely that Karin Månsdotter’s mother originated from the Uppland countryside, but the family lived in Stockholm and that is where Karin Månsdotter was born in 1550. She first appears in the historical sources as a 14-year old. At that time she was working for the musician Gert Cantor. He also ran an inn which was much favoured by King Erik XIV. Karin Månsdotter crossed paths with the king through Gert Cantor. There was a 17 year age difference between Karin Månsdotter and the Swedish king who, at the time of their first encounter in 1565, had been king of Sweden for five years.

Erik XIV had had several lovers before he met Karin Månsdotter. The longest of these earlier relationships had been with Agda Persdotter, with whom he had two daughters, Virginia and Constantia. When Karin Månsdotter moved into the royal castle in Stockholm she initially served as a lady-in-waiting to Princess Elisabet, Erik XIV’s half sister, and as a childminder for the young Virginia. It was, however, obvious that above all she was the king’s lover and that he had completely fallen for her. He no longer courted other women and ensured that Karin Månsdotter benefited from all possible comforts. The couple had their first child, Sigrid, in October 1566.

No-one believed that King Erik XIV and Karin Månsdotter would marry. Royal marriages pertained to the sphere of high politics at that time as they served to form alliances and bonds which could be vital in trade and war. It was preferred for the king to marry a foreign princess as this would strengthen Sweden’s international standing. Erik XIV’s marriage negotiations with Queen Elizabeth of England, as well as with Renata of Lotharingia who was the duke of Lotharingia’s daughter, were typical examples of the types of marriage partner sought. If a king could not find a suitable foreign princess then he had recourse to domestic nobility to find a suitable queen. This is what Erik XIV’s father, King Gustav I Vasa, had done on two occasions. No-one expected Erik XIV to choose a non-noble bride purely due to personal predilection, despite the fact that he had the permission of his privy council to choose his own bride and despite the fact that his love for Karin Månsdotter was well-known. King Erik XIV was a man full of surprises. At some point during the summer of 1567 the couple got married, during a period when the king was experiencing a period of diminished psychological health. He had just ordered that the Sture murders take place. The royal wedding was performed by the archbishop but was kept secret until December that year. In January 1568 Erik XIV’s and Karin Månsdotter’s son Gustav was born and became the royal heir apparent.

Very little is known of Karin Månsdotter’s personality, but much more is known about Erik XIV. He was capricious, and at times suffered pure madness. Karin Månsdotter had an attested calming effect on him and thus he became extremely dependent on her. Following the Sture murders, as the aristocracy and the king’s brother, Johan (later III of Sweden), became increasingly doubtful of Erik XIV’s mental capacity to reign, it fell to Karin Månsdotter to provide a calming balm on the growing general unhappiness. She appears to have been viewed as a friendly, calm, and harmless individual. Although many people may have been unhappy with the fact that she became the queen, she appears not to have been personally disliked.

Erik XIV’s health improved with the birth of his son Gustav. He wanted to have Karin Månsdotter crowned as queen and he wanted a state wedding. On 4 July 1568 a new, official wedding was held, and the now 18-year old Karin Månsdotter was crowned the very next day. Neither of the royals expected the sudden eruption of significant opposition. Within just a few weeks not only had Erik XIV been deposed and his family imprisoned but his younger brother Johan had assumed power. By the end of September it was all over.

Initially Karin Månsdotter and her son accompanied Erik XIV into captivity. The family was moved from castle to castle as King Johan III feared there would be attempts to free Erik and that a coup d’état would ensue. Meanwhile, Karin Månsdotter gave birth to another two sons: Henrik and Arnold. They died whilst still young. Despite this King Johan III remained worried and feared that his brother’s family might gain strength and pose an increasing threat to him. He ensured that Karin Månsdotter was kept apart from her husband.

Karin, Sigrid, and Gustav were taken to Åbo as prisoners. The family was not mistreated and had not been mal-treated whilst imprisoned in Sweden but captivity meant that Karin Månsdotter was subjected to King Johan III’s whims and political game-playing. In 1575 he decided that the then seven-year old Gustav should be removed from his mother and taken to Poland. He feared Gustav’s future claims to the Swedish throne and wanted the boy kept outside of Sweden.

Erik XIV died in 1577 and thus Karin Månsdotter’s time in captivity came to an end. She moved from Åbo castle to Liuksiala royal estate near Tammerfors where she saw out the rest of her days. Her daughter Sigrid eventually inherited Liuksiala and her nephew Åke Tott later also inherited the property.

Karin Månsdotter and Sigrid visited Stockholm one last time following the death of Erik XIV, in 1582. During that visit the jewellery which had been stolen from her was returned and she was given yet more land which she could earn an income from. Sigrid later became a lady-in-waiting to Anna Vasa, the daughter of King Johan III and Katarina Jagellonica. Karin Månsdotter’s life after her husband’s death was, in the main, relatively worry-free. She posed no threat to the reigning king and was well-liked in Finland. She died in Liuksiala on 13 September 1612, aged nearly 62. She is buried in Åbo cathedral.

The only known contemporary portraits of Karin Månsdotter were done by her husband Erik XIV, who drew them in the margins of his books whilst he was imprisoned. They show a curvaceous, smiling woman. In one of the drawings her hair is loose under the royal crown. Otherwise the best-known portrait is by Georg von Rosen and dates from 1872. This romantic-historic painting of Karin Månsdotter shows her clad in white with her husband, Erik XIV on the floor in front of her, while the malicious advisor Jöran Persson is seen demanding the king’s signature. Karin Månsdotter’s life story has also been depicted in novels such as Mika Waltaris’ 1943 work Karin Månsdotter, and on film. 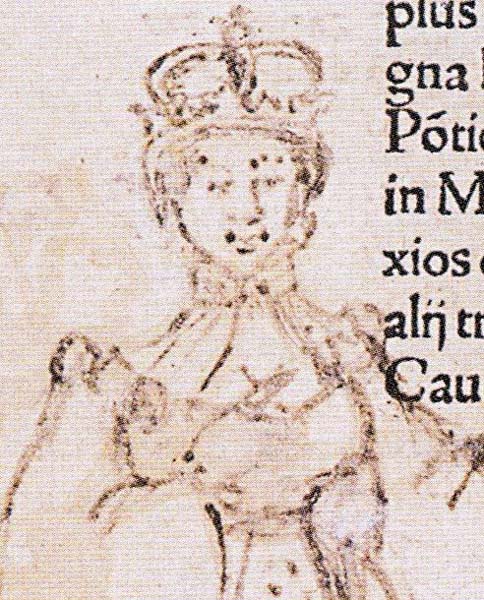