Karin Thunberg Arfwidsson was the first woman to run and own a driving school in Sweden and she also became one of the earliest women rally drivers in Sweden.

After the end of the First World War her family, like many others, struggled as a result of the economic depression. In the mid-1920s Karin Thunberg Arfwidsson’s mother died, aged only 41, and around the same time her father became unemployed. In order to contribute to the family finances Karin Thunberg Arfwidsson stopped going to school and started to help out at home and take care of her siblings. When she was 18 years old she obtained her driver’s licence and in order to facilitate things the family swapped out their old car for a new Dodge. The family remained in financially straitened circumstances and it was decided that, given her knowledge of driving and theory, Karin Thunberg Arfwidsson would set up a driving school.

In order to obtain permission to do this Karin Thunberg Arfwidsson was forced not only to approach the police but also the local county administrative board, neither of which was particularly enamoured of the idea of allowing a young woman to run a driving school. After taking a number of practical and theoretical tests, followed by a fair amount of hassle, Karin Thunbergs Körskola (driving school) was finally approved and she became the first woman to own a driving school, not just in Sweden but throughout Scandinavia.

In order to attract learner drivers to her school – which was one of ten in Stockholm – Karin Thunberg Arfwidsson approached Philipsons Automobil AB where she had previously purchased her Dodge. They allowed her to participate in three rallies in order to generate publicity for her driving school. Presumably no-one anticipated that she would win all three competitions and outclass her male competitors. The motoring press was fulsome in its praise. Karin Thunberg Arfwidsson came to know that the Ford Motor Company was lacking a woman driver for the Women’s Car Race run by Svenska Motorklubben (SMK) and the Vecko-Journalen magazine. In 1929 Karin Thunberg Arfwidsson made her way to the company’s Swedish branch in Frihamnen. There she convinced the directors of her abilities as a rally driver and got the go-ahead to compete in the race. Nils Arfwidsson, an engineer, was selected as her navigator. He was a member of SMK and was a known figure within the motor industry. The newspapers which reported on the race mentioned Karin Thunberg Arfwidsson’s driving school and prospective learners flocked to it.

The driving school was situated in the family home at St. Eriksgatan 95 in Stockholm. The advertising primarily targeted women, using slogans such as “Your friend drives … why shouldn’t you?” The school had two vehicles, a Dodge and a Ford Roadster. Despite the slogan Karin Thunberg Arfwidsson accepted both female and male learners.

Nevertheless, many people still didn’t believe that women should sit behind the steering wheel. Karin Thunberg Arfwidsson ensured that she emphasised in her interviews that it was important for women to have driving licences so that they could contribute by serving across a range of careers, and within the home and family.

While the driving school was a success Karin Thunberg Arfwidsson and Nils Arfwidsson continued their successful rally career. The couple raced in ten competitions, coming first in all of them. The successful couple even gained the attention of the Ford Company in the USA.

Karin Thunberg Arfwidsson and Nils Arfwidsson married on 9 November 1931 in Linköping and then took over Södertälje Bilbolag on Nygatan 1 in Södertälje, which was where they eventually moved. Karin Thunberg Arfwidsson gave up her high-speed and successful, albeit hardly danger-free, rally career following the birth of her first child. As she no longer needed to provide financial maintenance to her family she closed the driving school and adopted a more traditional life as a wife and mother. The couple had a total of five children together, three boys and two girls.

Karin Thunberg Arfwidsson was awarded Kungliga Automobilklubbens (KAK) golden driver’s badge. Although she was proud to receive the award she also felt it entailed obligations. As she wrote in a letter to her children in 1983: “In today’s heavy traffic priority must always be given to care for fellow beings and caution in driving”. 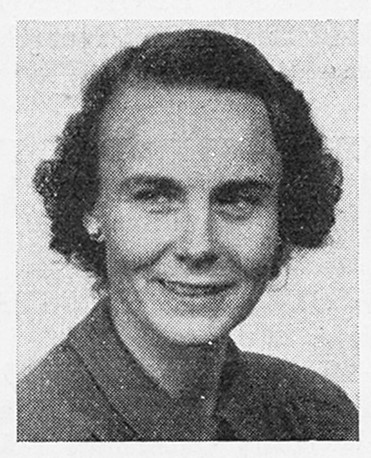