Karin Wegestål was a Social Democratic party politician who had strong beliefs in justice and equality. Some of the issues she actively became engaged in included the polemics surrounding the new pension reforms of the 1990s as well as the bombing of Serbia by the USA in 1999.

Karin Wegestål was born in Hjärup, Staffanstorp municipality, in 1934. Her parents were Johan Lindgren and Amina Lindgren, née Nilsson. Karin Wegestål’s political journey began when she as a 14-year old joined SSU (Social Democratic party youth organisation). In 1963 she joined the Social Democratic party women’s club and she remained rooted in the party for the rest of her life.

Karin Wegestål gained her lower school-leaving certificate in 1951 and then worked as a pharmacist’s assistant until 1965 at which point she began her high school studies at Komvux. After gaining her degree in Social Work at Lund she then worked as a social worker in Malmö and was involved in setting up Krami. This was a successful project which offered convicted youths new opportunities to find and keep steady work. In her spare time Karin Wegestål was an active politician within Staffanstorp municipality where one of her posts was as deputy chair of the social welfare board. She also served as chair of the women’s club in Hjärup, deputy chair of the Scanian Social Democratic party women’s district and as board member of the Social Democratic party district authority. Karin Wegestål was a stubborn individual who did not give up on important matters even when she was faced with opposition and criticism. She had already begun campaigning in the 1970s on behalf of the workers’ collective in Staffanstorp and in the Scanian party district for half of the women who stood in the Social Democratic party elections. Success finally came in 1993 when the party, under Ingvar Carlsson’s leadership, committed to “varannan damernas”, namely parity between the sexes.

Karin Wegestål was a parliamentarian for the Social Democratic party from 1988–2002. Some of her official roles included serving as an ordinary member of the defence committee, as a member of two inquiries into conscription, and for eight years, as chair of Personalvårdsnämnden för totalförsvarspliktiga (authority for personal care of those in military service), an authority for which the Minister of Defence was directly responsible. From 1993–2002 Karin Wegestål was a member of the parliamentary group in Organistationen för säkerhet och samarbete i Europa (OSSE), which aimed at reducing tensions across Europe and enacting humanitarian improvements on behalf of the population in Eastern Europe. During her time in OSSE Karin Wegestål frequently served as an election observer, a role she carried out with the utmost seriousness.

One of Karin Wegestål’s biggest political struggles regarded the introduction of a new pensions system implemented in the 1990s. At that time the Social Democratic party believed that Sweden needed to update the existing pensions system. In 1994 the Swedish Parliament adopted the principle of a new pensions system albeit it was first put into practise five years later, following a series of compromises and negotiations not only within the party but also with the conservative representatives in parliament. Karin Wegestål was quick to criticise the process for working out future pensions. She believed that the situation would be worse for those on low incomes and working part-time, who were, in the main, women. In the former ATP system it was a person’s 15 best years which were counted in order to work out a pension. The new system was based on a lifetime’s income. The basic pension for those who had not had paid employment was to be raised, which – according to Karin Wegestål – would result in those on low-income salaries receiving the same pension as those who had not been employed. This did in fact come to pass and has been a major problem for the pensions system during the 2010s.

The Social Democratic party leadership wanted the pensions reform to be accepted by the whole party. Three internal motions were put forward which were overwhelmingly rejected at three party conferences (1993, 1996, and the extra conference held in 1997). The Social Democratic party membership wanted to retain ATP, albeit with minor changes here and there. Ahead of the 1996 conference a group opposing the proposed reforms was set up, comprising three parliamentarians: Göran Borg, Lena Sandlin-Hedman, and Karin Wegestål. When the motion was finally put forward 94 per cent of those who responded were against it. At the 1997 party conference 64 motions on pensions were proposed. All received negative responses. The pensions reform was about to be fully rejected by conference but, following intense negotiations and compromises, eventually support was obtained. This included the party leadership warning the conference that without support this would cause a crisis in the Swedish government. Karin Wegestål worked intensely throughout this period in order to, step by step, impose changes on the proposed pensions reform so that women and those on low income would be better provided for. She also pushed for the responsibility for pension payments to be divided between employers and employees and this came to pass.

Karin Wegestål’s next major issue was an international matter and involved the Balkan wars. She received criticism for her stance, primarily from within her own party. NATO initiated a bombing-war against the former Yugoslavia on 24 March 1999 which lasted 78 days and during which 23,000 bombs were dropped onto Serbia and Kosovo. Karin Wegestål was actually in Belgrade directly after the cessation of bombing in June 1999. She saw for herself the impact of the bombing on schools and hospitals. There were thousands of fatalities and many thousands more had been forced into refugee camps. Offices and fields were destroyed and housing in ruins. She reported back to the Swedish Parliament and took a stance opposing NATO because it had carried out the bombing despite the lack of mandate from the United Nations. She was distraught that it was largely the civilian population that had suffered. Karin Wegestål then helped start the protest campaign “Stoppa bombningarna NU” and served as one of two spokespeople in government on behalf of the newly set-up Yugoslavia committee. She promoted the idea that the United Nations and the European Union should together seek to bring an end to the war in the Balkans. Anna Lindh had recently been appointed as foreign minister for Sweden and the official government stace differed from the traditional Swedish line taken in matters relating to foreign affairs. Karin Wegestål was accused of supporting the Serbian president, Slobodan Milošević, in his attacks and the brutal Serbian ethnic cleansing of Albanians in Kosovo. By the time NATO began its bombing the unrest and civil war in Kosovo had already been ongoing for at least ten years. The Albania UCK guerrilla force, which sought a free and Albanian Kosovo state, opposed Slobodan Milošević, who wanted to keep Kosovo as part of Greater Serbia.

Karin Wegestål was harshly criticised for demanding that the USA cease its bombings and that the Swedes support the suffering civilian of Serbia. She became more or less frozen out of the Social Democratic parliamentary group. The only person she could speak to was her party colleague and fellow parliamentarian Bengt Silfverstrand. The pair of them made several visits to the former Yugoslavia together. They also co-authored polemical articles seeking to arouse public opinion against the war and they were active members of the Yugoslavia committee. The Swedish prime minister, Göran Persson, supported NATO and the bombings whereas the previous prime minister, Ingvar Carlsson, shared Karin Wegestål’s views. A text he wrote, published in the British The Guardian newspaper in 1999, described a dark time “when power alone is in the right and when laws grow out of the barrel of a gun”.

Karin Wegestål died in 2019. She is buried at Uppåkra cemetery. 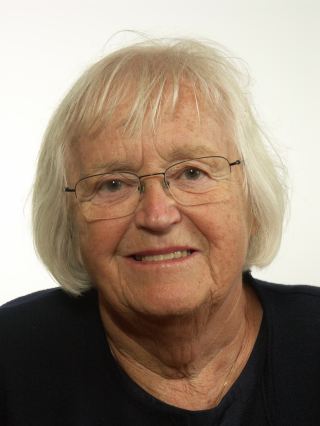