Karna Asker was a pioneer of Swedish modern textile art.

Karna Asker was born in 1897 in Copenhagen, the eldest daughter of the Swedish furniture-maker Magnus Asker and his Norwegian wife Betsy Katarina Simonsen. The family moved later to Gothenburg.

Karna Asker began the basic four-year textile training course at Slöjdföreningens Skola, nowadays HDK-Valand, Academy of Art and Design in Gothenburg, and followed up with a further two years doing the school’s higher course. She had very good marks and was rewarded each year for her studies. Her teacher of pattern design, Dagmar Gundersen, let the students study colour and form in the natural world and then allow their imaginations to flow freely in the creation of new designs. This teaching method was transmitted by Karna Asker, who in 1920 started as a temporary teacher at Slöjdföreningens Skola. In 1922 she was responsible for pattern design and in 1930 she became the school’s office manager. From 1935 until her retirement, she was the head teacher on the higher course teaching textile composition, batik and decorative needlework. Batik became something of a speciality for the school. Under her leadership, both the techniques and the motifs were developed. One of her students was Maud Fredin Fredholm who gradually made herself a name with, among other things, her batik-patterned clothes.

Karna Asker’s long teaching career was characterised by extensive technical knowledge and a highly selective textile perception. She was influential over generations of textile artists and was the inspector for the Gothenburg and Bohus County’s ambulatory domestic art courses. She collaborated in the production of the textbooks Prydnadssöm 1 in 1939 and Textilmönsterkomposition vid Slöjdföreningens skola in 1944.

Karna Asker’s artistic production, above all her rugs, have met with great appreciation. In the arts and crafts section at the successful Jubilee Exhibition in Gothenburg in 1923, one of the halls was dominated by a carpet with a distinctly modernistic touch. It was a huge Bohus County double weave in black and white composed by Karna Asker and woven by the Gothenburg and Bohus county non-profit arts and crafts society in Uddevalla. The novelty was how she heaped up the motifs, with generous measurements and a consciously monumental deportment. In 1925, she participated in the world exhibition Exposition Internationale des Arts Décoratifs et Industriels Modernes in Paris. The exhibition was a great success for Swedish industrial art and Swedish handicrafts, and Karna Asker was awarded a silver medal for an embroidered shawl.

Through Karna Asker, Axevalla Konstslöjd in Varnhem, started in 1925, soon achieved success. Karna Asker composed most of the Axevalla carpets the first years. The colours were dark and powerful and the rugs had a modern bearing, despite their affinity to textile peasant art. Thanks to her, Axevalla Konstslöjd was given the prestigious assignment of furnishing the Swedish America Line’s luxury vessel M/S Kungsholm with carpets. Karna Asker designed the carpets for the luxury cabins. They were made of Ava cut pile with a simple repetitive pattern against a brown or red background. Ava cut pile, a simplified form of pile, had been developed by Axevalla Konstslöjd to rationalise carpet-weaving and so that the carpets would better suit the new modern era. Karna Asker’s form language was radical and experimental and her carpets for the libraries and smoking-rooms aroused attention. One of the carpets, seemingly inspired by the oceans and heavens, awoke special appreciation. Waves, crannies, promontories, stars, rainbows, and undulations featured against blue or sea-green surfaces in a clear-cut and powerful composition of almost cubist character. Several of the carpets were displayed at the Röhsska arts and crafts museum, nowadays the Röhsska Museum, before the M/S Kungsholm sailed from Gothenburg on her maiden voyage to New York in November 1928, with one of the most elaborate furnishings of the age — “a triumph of Swedish taste and artistic skills”. Other textile elements aboard M/S Kungsholm were made by Elsa Gullberg, Märta Afzelius, the society Handarbetets vänner with among others Carin Wästberg, and also by Märta Måås-Fjetterström who delivered carpets from her workshop in Båstad.

Röhsska konstslöjdmuseet held a textile exhibition in 1929 in which three Ava cut pile carpets composed by Karna Asker were included. One of them was purchased by the museum. It was a moderately dark blue carpet with transverse lines of various breadths in brown and red, as well as a lighter element of recumbent stacks which gave an impression of depth. Karna Asker participated in starting the Gothenburg association Föreningen Konsthantverkare before the Stockholm Exhibition in 1930, and she exhibited the museum carpet in the association’s showcase at the Exhibition. Her carpets were also exhibited by Axevalla Konstslöjd, and the quality department store Nordiska Kompaniet (NK) exhibited her furniture textiles. A textile exhibition with work from Slöjdföreningens skola was arranged by her. At the Swedish Trade Fair (Svenska Mässan) in Gothenburg the following year, carpets were displayed from Axevalla Konstslöjd composed by Karna Asker, her sister Betty Kylberg and Inga Wedel.

Karna Asker produced public creations for two of the architect Sigfrid Ericson’s churches in Gothenburg. For Johanneberg Church in 1940, she composed an antependium and a wall hanging with textile application and free embroidery in silk, linen and wool. The biblical motifs were Såningsmannen, Det stora fiskafänget and Såsom hjorten trängta till vattenbäckar, så trängtar min själ efter dig, o Gud. This narrative hanging was executed in lucid colours with stylised figures and prodigious vegetation. The practical work was carried out by ten of her students whose initials can be seen embroidered into the fabric. Karna Asker married Sigfrid Ericson in this church in 1954. He was the former principal of Slöjdföreningens Skola. For the Masthugget Church, she designed a carpet for the chancel in 1954, with warm colours dominated by orange.

Karna Asker’s fiftieth birthday was celebrated by her friends and the teachers and students at the Slöjdskolan with the institution of a scholarship fund in Karna Asker’s name. When she retired from teaching at the school in 1957, she received the school’s plaque, as the first woman ever, for promoting the school’s interests to such a great degree. In 1985, she was awarded the Gothenburg City Honours Prize.

Karna Asker died in 1989 at 91 years of age. She lies buried at the Eastern Cemetery in Gothenburg. 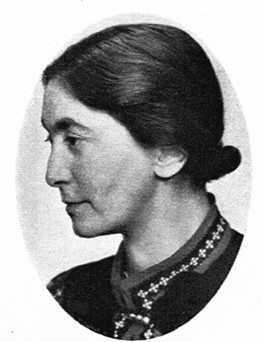