Karola Pålsson was particularly engaged with the trade union aspect of junior-school activism. This mainly involved improving their professional status by providing improved training and opportunities for further development. She emphasised that this also benefited the children. She also believed that junior-school teachers actually had greater responsibility for children than other teachers did as they were responsible for providing a good introduction to schooling which in turn formed the basis for any future education these children accessed. Karola Pålsson was influenced by the impact of contemporary educational reforms with regard to approaches to child-rearing. She also made the case for children with special needs being allowed to attend additional classes where they could be involved in activities such as gardening, for example.

At this time there were a variety of junior-school teacher-training programmes available, private, semi-state run, and those run by county councils. This led to the emergence of far too many and even poorly qualified junior-school teachers during the 1920s. Karola Pålsson therefore suggested that the training should be nationalised and that it should comprise a three-year course. This finally came to pass after her death in 1931.

Karola Pålsson was involved in setting up Sveriges Småskollärarinneförbund (junior-school teachers association of Sweden) in 1918. A few years later she became the chair of the association. At this time ordinary posts had been introduced at junior-schools and those employed in these posts were awarded equal pensions to public-school teachers. This was a tangible improvement in its own right. Other changes were still pending, however, and many were not implemented during Karola Pålsson’s lifetime. Nevertheless, the work she undertook was of a pioneering nature and later generations of teachers were able to build on her efforts. She was recognised as having good leadership skills, was considered to be wise, intelligent, well-spoken, and pragmatic. She was also viewed as endowed with great willpower and enthusiasm.

Karola Pålsson died in 1931. She is buried at the St. Pauli southern cemetery. 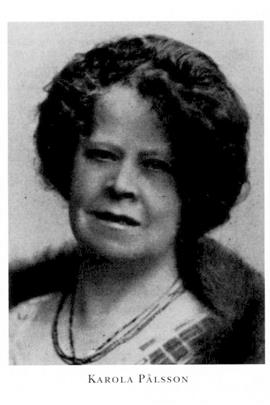