Karolina Widerström was the first woman to become a qualified doctor. She gained her medical degree in 1888. She was also a public educator and an active supporter of the women’s movement.

Karolina Widerström was born in Helsingborg in 1856. She was the only child of Olivia Erika and Otto Fredrik Widerström. Her father was a professional who worked variously as an army veterinarian, a physiotherapist, and as a teacher. Karolina Widerström’s parents took a serious interest in their daughter’s education. After attending a girls’ school in Helsingborg Karolina Widerström trained as a physiotherapist at Gymnastiska centralinstitutet (the central institute of gymnastics) during the 1873–1875 period. She then spent some time working as an assistant to Gabriel Branting, head of the institute, although she was keen to further her medical knowledge by continuing her studies. Once she had gained her school-leaving certificate from the Wallin school – with an ‘A’ grade in all her subjects – she enrolled at Uppsala university, from where she graduated with a basic medical degree in 1880. She then went on to study at Karolinska Institutet (KI). Her parents had moved to Stockholm at this point and she was living with them. She was invited to sit alone during the dissections which were part of the anatomy course, as this was considered to be an embarrassing subject for women. She turned down this option. “And I have always been glad that I did so” she later wrote. She also rejected the offer of segregated tuition in venereology.

Following the awarding of her medical degree in 1888 Karolina Widerström wanted to develop a specialisation. She was appointed as assistant to Wilhelm Netzel, professor of gynaecology at Karolinska Institutet, despite the fact that at that time women were barred from holding university posts. As she later wrote: “Netzel, however, just did whatever he wanted to”, and as he was so respected “no-one dreamt of commenting on it”.

In 1889 Karolina Widerström opened her own surgery in Stockholm, and was immediately inundated with a steady stream of patients. She very quickly realised that they knew nothing about their own bodies, of sexuality, reproduction, or of venereal diseases. From the outset she felt that it was an essential duty of hers to impart knowledge on these matters and she did so by giving public talks and by writing newspaper articles and publishing pamphlets.

Her article “Om menstruationen och dess hygiene”, in which she presented an overview of the female anatomy, the course of menstruation, and its role in releasing eggs and reproduction, was published in the journal Idun in 1896. That a respected women’s journal would print an article of this nature generated offence. Two editions later the editor commented that “in order to soothe those who had been upset” the medical articles contained within the journal would in future only concern matters which “will not give rise to consternation in this regard”.

Karolina Widerström was not about to be silenced, however. She herself described her role as an educator in women’s sexual hygiene as “my main focus of interest apart from my practise”. She, and several of the other earliest female doctors, were consistent in their efforts to educate women. Karolina Widerström’s two-volume book Kvinnohygien was an important element in this. The first volume was published in 1899 with the sub-heading “De kvinnliga underlifsorganen, deras förrättningar och vård”. She reworked and extended it several time and seven editions of it were released in more than 20,000 copies.

The second volume, De veneriska sjukdomarna och deras bekämpande, was published in 1907. In it Karolina Widerström highlights the extremely poor salaries paid to women as cause of prostitution. She asks how one could expect social solidarity from prostitutes, “who are legally minors, outlawed beings, disparaged and rejected by society”. She emphasises the shocking aspect of the so-called regulation of prostitution law by which women were ordained to have medical checks for venereal disease but not the men who made use of their services. At a meeting of Svenska Läkaresällskapet (the Swedish doctors’ association) in 1902 she was the only person to argue against these stigmatising checks the legislation imposed and she proposed an enquiry into its negative aspects. According to her own written account Karolina Widerström’s proposal generated “mockery and surprise”. However, eventually it led to the formation of the so-called regulation committee. Nevertheless, the law was not rescinded until 1918.

Karolina Widerström, in collaboration with her colleague Alma Sundquist, published anatomical plates depicting the reproductive organs. In 1901 she gave a talk on women’s anatomy and sexual hygiene at a national assembly of girls’ schools. Her talk was released as an off-print and was reprinted in several newspapers. From 1901 onwards Karolina Widerström taught physiology and health at several schools and teaching programmes in Stockholm, including Högre lärarinneseminariet (the advanced female teacher-training programme). She also worked as a school doctor. She introduced dissections of animals into her school classes on the reproductive organs. She also published, in collaboration with her friend and naturalist Maria Aspman, a textbook on the subject. At the 1903 general assembly of public schools, before an audience of 1,900 people, Karolina Widerström gave a talk on the importance of teaching sexual hygiene at school. She also lectured to final-year girls’ classes at Stockholm public schools.

The subject remained a sensitive one which sometimes generated opposition. Initially her talks were not publicly announced and tickets were sold privately. Whilst Karolina Widerström sometimes faced opposition she also continued to get requests for her talks and received praise for them too. Her own childhood appears to have been an important element in her fearlessness and her skill at presentation. In her mother’s copy of Kvinnohygien Karolina Widerström wrote “with thanks to my mother who by her own example taught me the importance and blessings of maintaining and paying attention to healthy natural instincts”.

Karolina Widerström was also active in matters relating to children’s relationships. In 1906 she gave a talk on “Barnets rätt och värn” at a conference on poor-relief and pensions in Stockholm. In particular, she focused on problems experienced by unmarried and single mothers. She criticised the law passed in 1900 which forbad women from working in heavy industry for the first few months after having given birth, without offering these women any financial compensation. “I wonder can the person who has had their bread stolen from them by me have any use for the proscriptions I impose on them in the name of safeguarding their health?” she queried. In response Karolina Widerström proposed that maternity benefits be introduced. However it was not until 1931 that they were actually introduced.

Karolina Widerström was active in a great many women’s organisations and, following the introduction of general suffrage in 1921, she served as chair of Landsföreningen för kvinnans politiska rösträtt (national women’s suffrage association). As a member of the Stockholm town council from 1912–1915 she was amongst the first women to be elected into municipal groups after the 1910 reforms of the right of representation. Whilst a member of the town council her particular concern lay in children’s health and she ordained physical activity and outdoor experiences. Girls’ clothing was an important issue for her. Karolina Widerström had already been involved as a student, in 1886, in setting up Svenska dräktreformföreningen (the Swedish association for the reform of women’s dress) and that same year she gave her first public talk on the subject. She opposed the use of bustles and corsets which impeded freedom of movement and she proposed different loose-fitting clothes. She would return to the subject of the physical health of girls throughout her life. She completely rejected the concept – accepted by doctors and mentioned during school debates – that puberty in women was a period of weakness. Karolina Widerström believed the opposite was true, that during early puberty girls were often more developed than boys.

One of her important contributions was the establishment of outdoor school departments within the Stockholm public schools. She also believed it was important to see that children’s physical education was adapted according to their ages. Karolina Widerström was one of the founders of the Svenska Kvinnors Centralförbund för Fysisk Kultur (Swedish women’s central federation for physical culture) in 1924. An article, published in Tidevarvet in 1925, states that the federation was founded in response to the increasing need for “physical strength, speed, stamina, determination and presence of mind in women” in modern society.

As was the case with other academically qualified women female doctors were similarly barred from holding higher public posts. They could not be employed at public hospitals, work as provincial doctors, or hold posts within medical faculties. When Ada Nilsson and Alma Sundquist were prevented from applying for hospital posts simply because they were women 31 female doctors submitted a written protest to the government in 1903. It led to the decision to allow unmarried women the right to apply for a limited number of public posts at hospitals and the university from 1903 onwards. Further advances were won in the new right of access act of 1909. In 1916 female doctors, under the leadership of Karolina Widerström, formed a permanent committee to safeguard their interests. Hedda Andersson, who was the second female doctor in Sweden, noted in an anniversary speech: “It is certainly thanks to the wisdom of our first doctor, Karolina Widerström, who set the matter on the right course from the outset, that we find ourselves in as favourable a position as we do.”

It was her involvement in women’s wear reforms that brought Karolina Widerström into the domain of the women’s movement. She held a lot of executive posts, including chair of the Nya Idun society from 1900–1929, deputy chair of Akademiskt bildade kvinnors förening (academically qualified women’s association) from 1904–1911 and chair from 1911–1918, chair of Landsföreningen för kvinnans politiska rösträtt from 1918–1921, and deputy chair of Fredrika-Bremer-Förbundet (association) from 1921–1935. Karolina Widerström was awarded an honorary medical doctorate from Karolinska Institutet in 1933 in recognition of her medical contributions

Karolina Widerström was both fearless and self-confident. She worked ceaselessly on behalf of women’s health and their rights whilst also laying claim to her own rights. A typical example of this is an anecdote about how she once insisted that the entry price to one of her talks should be raised: “The low entry fee is a symptom of the undervaluing of intellectual effort which is increasingly a sign of the times”, she wrote, and then she demanded more than double the original price.

Karolina Widerström lived with her mother until the latter’s death in 1909. She then moved in with her friend Maria Aspman. Their apartment at Fleminggatan 30, Stockholm, also served as her surgery. After her death, the apartment was donated to Kvinnliga akademikers förening (KAF). Karolina Widerström, who loved the outdoors all her life and loved to walk in the mountains and swimming, obtained a summer place in Sandhamn, to which her extensive circle of friends was also welcome. 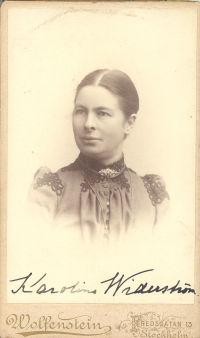