Katarina Jagellonica (Catherine Jagiellon) was a Polish-Lithuanian princess who married the Swedish king Johan III. She is sometimes viewed as the only true Renaissance queen of Sweden. Her political contacts, cultural interests, and her religious convictions all played an important role in Swedish history, with regard to both domestic and foreign policies.

Katarina Jagellonica was born in Cracow, Poland in 1526. She was the youngest of six children born to King Sigismund I of Poland-Lithuania. Katarina Jagellonica belonged to the most prominent tiers of European aristocracy through both of her parents. Her mother, Bona Sforza, was the daughter of Duke Gian Galleazzo of Milan and Isabella of Aragon, who herself was the daughter of King Alfonso II of Naples. Katarina Jagellonica’s childhood at Wavel castle in Cracow was influenced by both of her parents’ backgrounds and she learnt to speak at least three languages fluently – Polish, Italian, and Latin. Following the death of her father in 1548, and the succession of his son Sigismund II August, Katarina Jagellonica and her mother moved to Masovia. Eight years later Bona Sforza travelled to Italy to rule over the duchy of Bari, where she died the following year.

As a Polish-Lithuanian princess Katarina Jagellonica was highly sought-after as a suitable bride for a prince. Her brother used her as a political pawn, particularly in his negotiations with Tsar Ivan IV (the Terrible) of Russia, who was one of the most obstinate suitors for Katarina Jagellonica’s hand. King Gustav Vasa also suggested marriage matches with his sons, but for a long time interest was only lukewarm from both Sigismund August and from the Swedish dukes Erik and Johan. This changed following Gustav Vasa’s death and Erik XIV’s accession to the Swedish throne in 1560. The next year Duke Johan proposed to Katarina Jagellonica, but Sigismund August tarried in his reply, partly because he wanted to see her elder sister Anna married first. Johan spent the summer of 1562 in Danzig and marriage negotiations continued. His proposal was suddenly accepted on 23 September and it was decided that the wedding would take place on 4 October – this was such a short turnover time that very few foreign dignitaries were able to attend. The wedding, held in Vilnius, followed the Catholic ritual and Katarina Jagellonica’s rights to continue practising her Catholic faith in Lutheran Sweden were guaranteed.

Following the wedding Duke Johan and his new wife Katarina Jagellonica travelled to Åbo, accompanied by an extensive retinue of nobles and their servants. They arrived just before Christmas. Katarina Jagellonica’s stint as duchess in Finland was short-lived, however, as her husband fell into a serious dispute with his brother Erik. In August 1563 Åbo castle surrendered and Katarina Jagellonica was forced to accompany Duke Johan to Gripsholm castle where they were both imprisoned.

The couple spent four years living in the Sörmland castle. Some members of Katarina Jagellonica’s Polish retinue were also imprisoned there with them. This period had a significant impact on the couple’s married life as well as on Duke Johan’s spiritual development. He became heavily influenced by Katarina Jagellonica’s Catholic faith and this led to a change in direction for Swedish religious policies during the 1570s and 1580s. Throughout her imprisonment Katarina Jagellonica retained her value as a significant political figure and was thus well-treated by Erik XIV’s men. Tsar Ivan still wanted to marry Katarina Jagellonica and sought to convince the Swedes to have her extradited. Sigismund August was keen to ensure his sister’s well-being and this played a determining role in the Polish position vis-à-vis Sweden during the ongoing Nordic Seven Years’ War.

Katarina Jagellonica, who sporadically suffered from ill health, fell pregnant during her imprisonment and gave birth to two children. Her daughter Isabella was born in 1564 but died already by 1566. Later Johan instructed Willem Boy to complete a sarcophagus for his daughter which is still visible in Strängnäs cathedral. In June 1566 their son Sigismund was born. As King Erik XIV was suffering from

periodic bouts of mental health problems a reconciliation was organised between the two brothers in October 1567. Although Johan and Katarina Jagellonica were released they were not given complete freedom of movement in the ensuing months. Their second daughter, Anna, was born at Eskilstuna royal estate in the spring of 1568.

Then a decisive turning point occurred in Katarina Jagellonica’s life. In the summer of 1568 Johan initiated a rebellion against Erik and deposed him from the Swedish throne. Katarina Jagellonica triumphantly arrived in Stockholm on 7 November. She was crowned queen on 10 July 1569. As a Catholic queen in protestant Sweden she embodied both the hopes and the fears of those south of the Baltic. On the one hand fears arose for her life, and on the other hand she became viewed as a potential tool for returning Sweden to the Catholic fold. If Katarina Jagellonica had been able to persuade King Johan III to convert then an important step in the process would have been achieved. Katarina Jagellonica wrote to her friends and family in Poland explaining that she sympathised with their hopes but that it was politically impossible for Johan to change his faith. Despite receiving harsh criticism for the compromises she made with regard to Lutheran conventions, particularly in terms of the Eucharist, Katarina Jagellonica personally stayed true to her Catholic faith, retaining a private chaplain and confessor.

In July 1572 Katarina Jagellonica’s role within international politics became even more complex than before. Her brother, Sigismund August, died without issue, thus enabling her son Sigismund to make a claim to the Polish-Lithuanian throne. This move would determine Swedish policies with regard to their southerly neighbour for a long time. At the time of his uncle’s death Sigismund was only six years old and was overlooked in the search for a new king. However, his candidacy remained active and in 1587 he ascended the Polish-Lithuanian throne. Katarina Jagellonica also became a key figure in Swedish foreign policy in another way. In theory she was entitled to a significant Italian inheritance through her mother, which both the Neapolitan authorities and the Spanish king Philip II forcibly opposed as they sought to keep the inheritance themselves. Although this issue led to energetic Swedish diplomatic interjections in Italy by the likes of Pontus De la Gardie, amongst others, the opposition they faced was too strong to produce any results.

King Johan III’s respect for Katarina Jagellonica is well-testified. She heavily influenced his foreign policy as regards the Papal state as well as the development of his artistic and architectural tastes. It is likely that she actively contributed to the spread of examples of the Italian Renaissance in Sweden. Johan’s faith in his queen was so strong that he ensured she would become the regent in the event that he died before their son Sigismund attained maturity. He also appears to have been faithful to Katarina Jagellonica. Johan had had mistresses before Katarina became a part of his life but this ceased upon their union. The king’s admiration for his queen was shared by both Swedish and Polish political magnates. Contemporary accounts from both kingdoms emphasise her piety, patience, and generally virtuous lifestyle.

A central focus in Katarina Jagellonica’s life as queen was the royal estate at Lovön, where, in the late 1570s, Johan III had decided to have a castle built. It was named Drottningholm in honour of his wife’s rank. However, the castle was not completed until after her death.

During the 1580s Katarina Jagellonica’s life was overshadowed by the growing opposition between Sweden and Poland-Lithuania, the latter of which was currently under the rule of her brother-in-law, Stephen Báthory, from Hungary, and her sister Anna. Sweden and Poland-Lithuania were allies and were engaged in battle against Russia, but, following Stephen Báthory’s establishment of a unilateral truce in 1582, completely disregarding Johan III’s wishes, a tense situation arose which Katarina Jagellonica found difficult to deal with. She was dismayed at the inability of her husband and her

brother-in-law to settle their differences and that she could not persuade Johan to espouse a more tolerant policy towards her native kingdom. At the same time she also did everything she could to improve life for those who had been impacted by the extreme change in direction of Swedish policy. During the autumn of 1582 Katarina Jagellonica took in Karin Månsdotter, wife of the deposed and late King Erik XIV, and saw to it that she had her confiscated jewels returned to her.

Katarina Jagellonica died at Stockholm castle on 16 September 1583. She was buried the following February in Uppsala cathedral. Willem Boy was commissioned to complete a stately funeral monument to the late queen, which can still be visited in the cathedral. 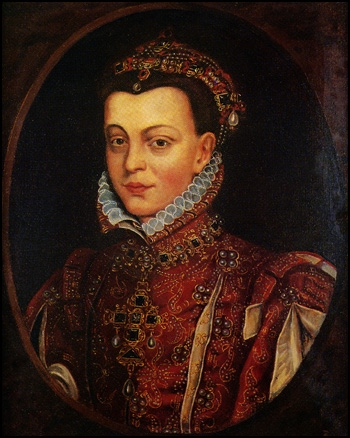