Katarina Stenbock was a Swedish queen who then became a dowager queen. She was the third wife of King Gustav (I) Vasa and she was the longest serving queen regent of Sweden.

Katarina Stenbock lived through much of the Vasa era, experiencing the reigns of six Vasa monarchs. She was born during the reign of King Gustav Vasa and died when his grandson, Gustav II Adolph, was on the Swedish throne. She herself was queen for eight years, and spent sixty years of her life as dowager queen, thus making her the longest serving queen of Sweden.

Katarina Stenbock was the daughter of Gustav Olsson (Stenbock) and Birgitta Eriksdotter (Leijonhufvud). Her father was one of King Gustav Vasa’s closest associates and he held the most land during that king’s reign. Her mother was the sister of Gustav Vasa’s first wife, Queen Margareta Leijonhufvud. Katarina Stenbock was born and brought up at Torpa manor, in Länghem parish, Västergötland.

Katarina Stenbock’s family belonged to the so-called extended ‘royal family’ which, as a result of marriages and blood ties, developed into a small, extremely limited noble elite who exercised major economic, social, and dynastic capital. New connections were forged through marriage between the royal family and the leading families of the Swedish kingdom. King Gustav Vasa selected two of his queens from within this group, namely the aforementioned Margareta Leijonhufvud and Katarina Stenbock. The king was able to expand the Vasa dynasty thanks to the networks generated through his queens. The extended ‘royal family’ were rewarded with land donations and appointed to the leading positions in the kingdom in return for their support to the Crown.

Katarina Stenbock’s marriage to King Gustav Vasa must be viewed against this backdrop. Upon becoming a widower in 1551 the king sought a new wife. It was to the advantage of both the monarch and his extended family to reconfirm their ties through a marriage alliance. When Katarina Stenbock became the new queen her relatives could hope to maintain their advantageous and beneficial relationship with the royal house. During the Vasa era, given the significance of personal ties within the political culture, one of the queen’s important duties was to ensure the maintainance of positive relations between the Vasas and the Swedish nobility.

The wedding took place in Vadstena in August 1552, at which point Katarina Stenbock was also crowned queen. Some of the clergy were opposed to the marriage given the close family ties between the bride and groom (one of the king’s previous wives had been Katarina Stenbock’s maternal aunt). However, the king was able to go ahead with the wedding with the support of the privy council. Of course, the king also saw this as a means to affirm his authority as the worldly head of the Swedish church.

Katarina Stenbock has understandably not left a huge mark on history in her role as queen. She was just 17 years old when she became responsible not only for the royal household but also for the nine royal children, the eldest of which were either older than her or the same age as her. Her new husband was 40 years her senior and had already made his mark at court. Katarina Stenbock’s time as queen included mediating in the many disputes which arose between the king and his eldest daughter Cecilia Vasa. Another impression of Katarina Stenbock that has survived is that of an ideal, devoted, and self-sacrificing wife who would not leave her sickly husband’s side during his final years. In 1560, aged just 25, Katarina Stenbock became a widow following 8 years of marriage. Although she never had any children of her own Katarina Stenbock appears to have forged positive relationships with her foster children, with the exception of Duke Karl. Her relationship to the latter became strained.

During her marriage Katarina Stenbock never received written documentation regarding which properties would be awarded to her as a widow in order to provide an income. She only ever received an oral promise from King Gustav Vasa that the wealthy royal farm of Strömsholm in Västmanland would become her primary seat as dowager queen. It was not until the reign of King Erik XIV that she was finally provided with an official letter of donation for the property. All of the lands awarded to her lay within Karl’s duchy. When Karl attained the age of majority towards the late 1560s he laid claim to all of them. Katarina Stenbock agreed to return her Södermanland properties to him. In return she was awarded the Kastelholm castle lands in Åland by King Johan III. However, her rights to the royal Strömsholm farm became a long-drawn out and bitter dispute. Despite Duke Karl’s recurring claims and eventual threats to forcibly retake the farm with arms Katarina Stenbock held fast to her right to the land. She ensured that she had the support of King Johan III and – after having spent more than 20 years living on the estate – she finally obtained a parliamentary decision in 1582 awarding her both the royal farm and the income from it.

For decades the dowager queen’s court at Strömsholm served as a focal point for her female relatives. They would arrive as young women in order to undertake service as ladies-in-waiting and then they would return later as married women in order to deliver their children. Katarina Stenbock often proved vital in finding suitable matches for her younger relatives. It remained of fundamental importance to achieve strategic alliances between the leading families of the kingdom. She also hosted many weddings, providing her with good opportunities to display her family’s power and prominent position.

Katarina Stenbock remained a widow, although she considered marriage to a couple of German princes during the 1570s. However, as a widow she retained sole control of her properties which thus made her financially independent. She was a successful estate manager and was financially solvent. Indeed her income allowed her to serve as an important lender to the Crown, a vital resource given the frequency with which it went to war. Her role extended beyond just lending large sums of money and also entailed providing serious amounts of food for the Swedish army. Although this generated favourable relations with her debtors, and gave her a certain amount of influence, she nevertheless found it hard to get her loans repaid given the kingdom’s poor finances.

Katarina Stenbock enjoyed a prominent position in her family thanks to her roles as queen and dowager queen. With one foot in the royal family and the other in the upper nobility she played an important mediating role during the many political conflicts which arose during the Vasa era. For example, she mediated between King Erik XIV and the survivors of the 1567 Sture murders, as a result of which Katarina Stenbock had lost one of her own brothers. She was also actively involved in seeking a reconciliation between Erik XIV and his brother Johan (later III) who was imprisoned at the time. It was Katarina Stenbock’s authority as dowager queen that enabled her to do this: she was “not just their mother, but the mother of the nation”. She also appears to have had the full confidence of those concerned. In similar fashion, Katarina Stenbock also became involved when several of the privy council fell into disgrace towards the end of King Johan III’s reign

Katarina Stenbock was drawn into the power struggles between King Sigismund and Duke Karl in the 1590s. Her relatives – who supported the king – found themselves paying the ultimate price for their loyalty in the form of exile, confiscated property, imprisonment, and executions once the duke emerged victorious. Katarina Stenbock, whom the duke had considered suspect throughout the conflict, opened the doors of Strömsholm castle to her relatives when most people turned their backs on them. Having already lost her Åland donation during the struggle she then campaigned on behalf of her family members to help them regain what was theirs. She remained active in matters which concerned her family right to the end. She carried on hosting high-ranking weddings for the younger members of her family and organising dignified funerals for the elder members. She was probably largely immobile towards the end of her life and suffered from constant pain in her joints.

Katarina Stenbock died on St Lucia day in 1621, aged 86, at Strömsholm castle. She was buried at Uppsala castle. The eulogy held at her funeral likened her to a “mother without a child” who had opened up her home to many orphans. She was lauded for using her position to help others. The eulogy described her as benevolent to the poor, a kind housekeeper towards her servants, and a generous benefactor of Västerås cathedral. 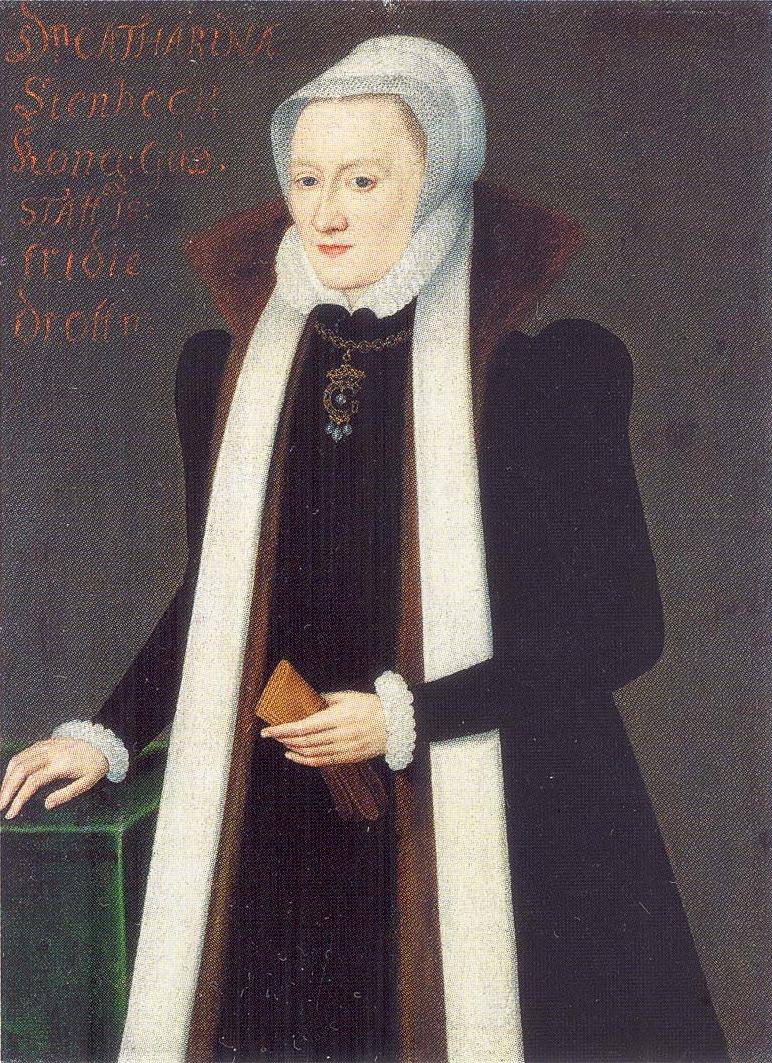