Katarina Ulfsdotter was one of the co-founders of Vadstena Abbey. She also served as its first, albeit never consecrated, abbess. She is a recognised as a saint by the Catholic church.

Katarina Ulfsdotter was born in either 1331 or 1332. She was the fourth child of Ulf Gudmarsson, a knight who was also a member of the Privy Council of Sweden and a magistrate, and his wife Birgitta Birgersdotter, a mystic who founded the Bridgettine order, who today is known as Saint Birgitta or Bridget of Sweden. One of the Vadstena monks, named Ulf Birgersson, compiled a biography of Katarina Ulfsdotter entitled Vita Katherine, most of which dates from the 1410s. This biography notes that as a child Katarina Ulfsdotter had received some form of schooling from the abbess of Riseberga abbey. We know very little about any further education that Katarina Ulfsdotter may have received, but the circa five year elder Nils Hermansson, later Bishop of Linköping and a friend of Birgitta, was hired to tutor some of her children. Whether these children included Katarina Ulfsdotter is not known. As an adult she was able to express herself in both Latin and Italian. Although her surviving letters were all been penned by professional scribes, there is no doubt that Katarina Ulfsdotter was able to both read and write.

Birgitta Birgersdotter’s deep religious belief and conviction regarding her own role as prophet left its mark on the whole household. Katarina Ulfsdotter was deeply influenced by her mother. When she, at barely twelve or thirteen years of age, married Eggard van Kyren, a knight ten years her senior, she convinced him that they should have a celibate marriage. Their marriage was a loving one, if the account given in Vita Katherine is to be taken as credible.

Katarina Ulfsdotter’s father died shortly after she married. Her mother then made her way to Rome, in the hope of gaining a papal audience and receive his blessings for the monastic order that she had been called to set up through divine visitations. She faced a long wait in Rome, as the papal residence at that time was located in Avignon. Like her mother, Katarina Ulfsdotter also undertook a pilgrimage to Rome. The journey, which required her husband’s permission, took place in 1350, a Holy See jubilee year. Less than a year later she was notified that her husband had died, leaving her a widow at age 19. Despite a strong longing for her home country and the position she enjoyed there, Katarina Ulfsdotter decided to stay in Rome and assist her mother.

Katarina Ulfsdotter, along with her mother, became a public figure in Rome and throughout Italy. Their network included not just successive popes but also cardinals, princes, princesses and other decision makers. These connections came to play a major role in Katarina’s ability to complete the tasks which her mother had asked her undertake on her deathbed. The first of these was to take her mother’s remains back to Sweden to be buried at the abbey that was being constructed, on her late mother’s instructions, at the old royal farm in Vadstena. Katarina Ulfsdotter duly complied: she and her entourage undertook a somewhat exhausting journey through Europe carrying her mother’s skeletal remains in a chest supplied with carrying straps.

Following their eventual arrival at Vadstena on 4 July 1374 and the subsequent burial of her mother’s remains, Katarina Ulfsdotter’s activities focused on three fundamental tasks. The first of these was, as leader of the abbey being constructed at Vadstena, to ensure that the building was completed and the order run according to her mother’s wishes. The second was to seek a more comprehensive form of papal approval for the Bridgettine order than that which her mother had received in 1370. The final task was to use all means available to her to seek her mother’s canonisation.

The second and third task required that she journey back to Rome, which she did in the early summer of 1375. She returned to Vadstena in the spring of 1380 having been successful in her aims. The Bridgettine order now enjoyed Pope Urban VI’s unconditional papal approval and Katarina Ulfsdotter had commenced her mother’s canonisation process by petitioning the curia in October 1379. She herself delivered detailed testimony, which is recorded in the proceedings. Katarina Ulfsdotter was able to make use of the guaranteed support of many influential individuals through her extensive network in Rome and in the Sicilian kingdom, including Queen Joanna of Naples.

Katarina Ulfsdotter wrote home to Sweden from Rome to promote her mother’s religious order in her native country. While she was in Rome Katarina Ulfsdotter had also worked on behalf of the Swedish Church, for example by seeking papal approval for an episcopal appointment. She was well known and respected by the pope and cardinals and successfully gained papal approval for a candidate for bishop, even when King Albrecht of Sweden had promoted another person. The esteem in which Katarina was held can also be seen in that she was called to give witness in the controversial election of Pope Urban VI in 1378. Urban showed his appreciation for her support by awarding Vadstena Abbey the rights to the very profitable Vincula indulgence. Further, in a papal bull dated 30 July 1378 the pope also specifically cited Katarina Ulfsdotter as co-founder of Vadstena Abbey along with her late mother.

Katarina Ulfsdotter retained full authority during the construction of Vadstena Abbey. She made separate agreements with each of the nuns and cared for those who suffered work-related injuries during the building process. However, her own health had already begun to weaken on her final return journey from Rome. Her illness worsened to the extent that towards the end of her life she could neither speak nor eat.

The Vadstena diary notes that Katarina Ulfsdotter died on 24 March 1381. This entry, however, was made at the time the diary was compiled, at least a decade afterward the events concerned. Vita Katherine repeats the same date of death. However, the usually well informed historian Johannes Messenius claims that this date is erroneous and that Katarina Ulfsdotter did not die until 24 March 1383. It has not been possible to resolve this discrepancy.

Katarina Ulfsdotter’s funeral was a national solemn occasion attended by bishops, priests and members of abbeys from the three Nordic kingdoms. During the 1410s a so-called elevatio was undertaken, which entailed the removal of her remains from her grave. This can be taken as the initiation of proceedings to have Katarina Ulfsdotter canonised. Ulf Birgersson’s biography of Katarina Ulfsdotter, the aforementioned Vita Katherine, was partly based on conversations with people who had belonged to her household in Rome. This biography was apparently begun at the latest in 1414, which was the year one of his informants died, and was completed by 1427. Eyewitness testimony from those who had experienced miracles was compiled to support the canonisation process, which mainly occurred in Vadstena during the years of 1475-1477. The pope approved the inclusion of her cult within the Ordo Sanctissimi Salvatoris and within the three Nordic kingdoms. This development was marked by a translation ceremony held in Vadstena in August 1489. Although the intention was to fully canonise Katarina Ulfsdotter interest had begun to wane in Sweden as a consequence of the Reformation. Nevertheless, during the medieval period Katarina Ulfsdotter was already inscribed as a saint in Martyrologium Romanum*, the official Catholic calendar of saints, by papal order and thus she officially holds saintly status within the Catholic Church. The date of her feast day has varied. The martyrology lists it as 24 March, but the Catholic parish in Stockholm commemorates her on 2 August, which was the date chosen during the medieval period to mark her translation day.

Katarina Ulfsdotter’s remains are kept with those of other saints of Östergötland in the red saints’ shrine in Vadstena Abbey Church. 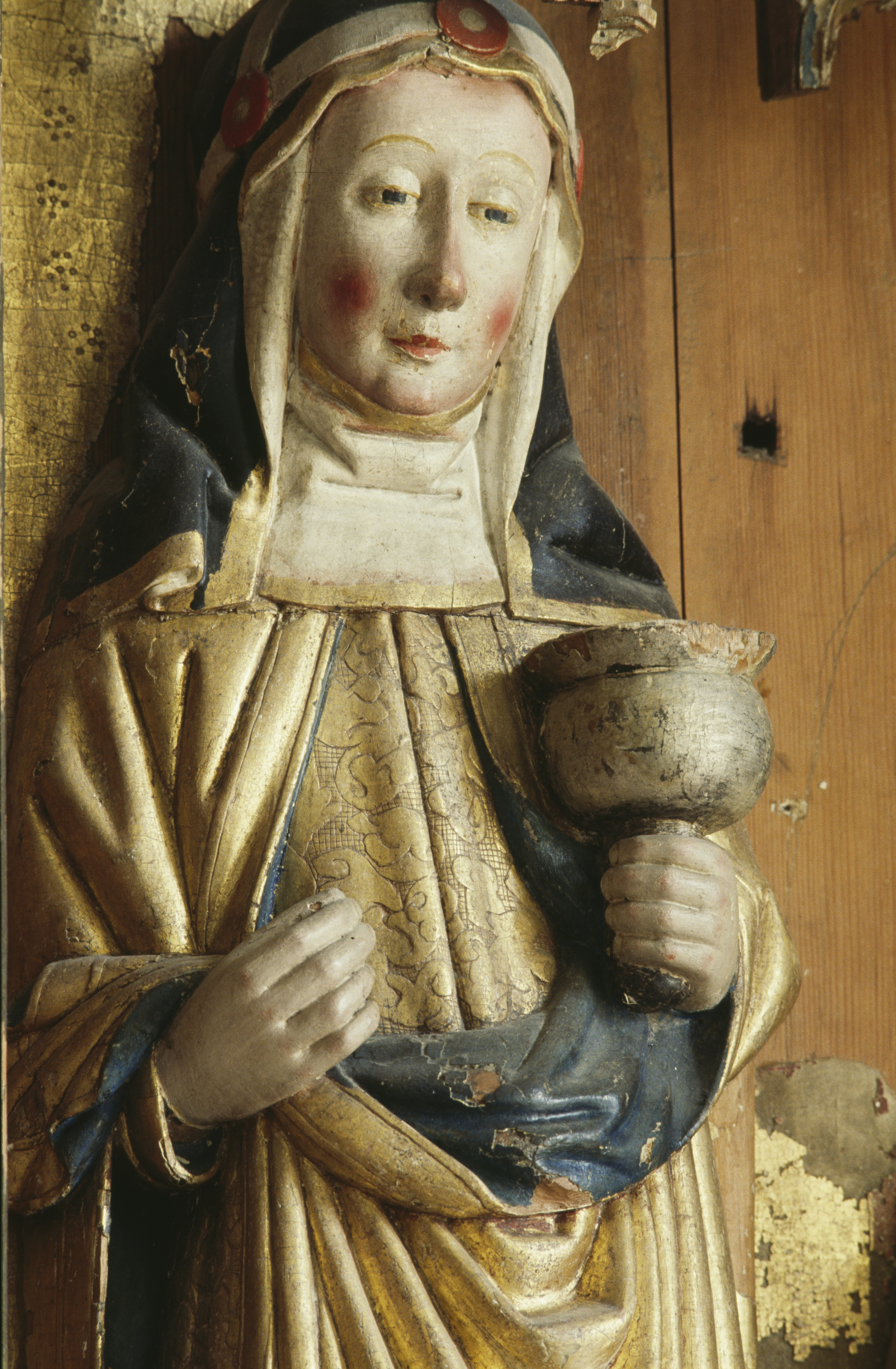