Kerstin Abram-Nilsson was an artist, a debater and a social activist, who primarily expressed herself through graphic arts.

Kerstin Abram-Nilsson was born in Stockholm in 1931. She and her elder brother were brought up in a middle-class home where making music and engaging in the arts was the norm. Her parents were Abram Nilsson, a physician, and his wife Margareta Dahlström, a nurse.

Once she had finished school Kerstin Abram-Nilsson then, in 1951, attended Konstfackskolan (now Konstfack, college of arts, crafts, and design) in Stockholm and subsequently enrolled in the Royal Swedish Academy of Fine Arts. Her instructors in graphic art were Harald Sallberg and Jurgen von Konow. It was during her student years that Kerstin Abram-Nilsson developed an interest in travelling and experiencing other cultures. She and some of her fellow students, including Alf Olsson who later became her husband, travelled by car through the former Yugoslavia, Greece, and Turkey during their summer holidays in 1955 and 1957. She was inspired by her visit to Yugoslavia to create black and white lithographs entitled Människor på väg. She sent illustrated letters recounting her travels to the Svenska Dagbladet newspaper and to a journal called Konstvännen. After her student years Kerstin Abram-Nilsson travelled to Central America with Alf Olsson, now her husband. During the 1959–1960 period she worked on a series of works entitled Aktuella försök och samhällstankar, one of which was an etching called Babels torn which was published by FiB Konstklubb.

During the 1960s Kerstin Abram-Nilsson’s interest and involvement in other cultures increased. Following her second marriage, to the architect Valdemar Axelsson who served as an expert on various UN programmes, she accompanied Axelsson to the newly formed independent states of Somalia and Trinidad. Whilst she was in Somalia she debated giving up her life as an artist because she had been so deeply moved by the sharp contrasts between life in the West and what she saw in Africa. Nevertheless, she picked up her knife and began to carve linoleum pictures from which she printed black and white images. These became an expressive series of linoleum cuts entitled Vi och dom. She also provided illustrations for school textbooks in Somalia. She later produced further textbook illustrations for Swedish schools, such as Versboken, which formed part of the Småskolan series of reading primers by Britt G Hallqvist in 1966. She was a productive illustrator and created illustrations and covers for her own books and those by others including Ingrid Sjöstrand’s children’s book Kalle Vrånglebäck, Bo Lundberg’s Synvändor – om naturen, människan och helheten and Marie Nordström’s Gener och sånt. Kerstin Abram-Nilsson exhibited paintings and lino cuts displaying African themes at an exhibition called 12 separata held at Liljevalch art gallery in 1966.

Kerstin Abram-Nilsson became an ‘image activist’ in 1968. Along with Boi Edberg she hired advertising spots in Stockholm where they mounted large paintings on paper decrying the polluting of nature and demanding the publicising of the actual national plans for waterworks and such like. These posters were later displayed at Konstnärshuset. She submitted paintings and linocuts for the Konstnären som agitator exhibition at Södertälje art gallery in 1968. In 1972 Kerstin Abram-Nilsson wrote in Paletten: “All images now pertain to power and powerlessness” as she carried on working for a better world in the face of cutbacks in funding, environmental destruction, and nuclear power technology. She produced pamphlets for the likes of Miljöcentrum with Anna Sjödahl and Barbro Backberger and others. In May 1976 a major exhibition called ARARAT (Alternativ forskning i Arkitektur, Resurser, Konst och Teknologi) opened on the theme of a future ecological society based on alternative technology, recycling, and biological cycles at Moderna museet in Stockholm. The idea behind the exhibition, which gained both media and public attention, arose at the kitchen table in the Abram-Nilsson and Axelsson home in Djursholm. In the late 1970s Kerstin Abram-Nilsson and four others launched a project entitled Väggtidningen. The intention was to use poster sites in older subway stations to hold a public debate by artists and authors whose contributions would be retained for posterity. A test edition of Väggtidningen containing woodcuts by Kerstin Abram-Nilsson and drawings in pen by Ann Margret Dahlquist-Ljungberg was displayed in 1978 at Bildfestivalen held at Liljevalchs art gallery.

Kerstin Abram-Nilsson was involved in founding Konstnärshusets Grafikgrupp in 1970. She, along with several of her colleagues, had been active in a graphic art workshop from 1957 to 1969. She was also a member of Grafiska sällskapet. These groups generated many solo and group exhibitions in Sweden and abroad. She helped to celebrate the 75th anniversary of Grafiska Sällskapet by submitting work to an exhibition of contemporary Swedish graphic art at Liljevalchs art gallery in 1985. In conjunction with Konstnärshuset Grafikgrupp she also exhibited at Gallerie Nicolae in Columbus, Ohio in 1988. Further, she was involved in triennial graphic art displays as well as group exhibitions organised by NUNSKU (Nämnden för utställningar av nutida svensk konst i utlandet) from 1965 until the 1980s. NUNSKU at this time focused heavily on graphic art displays which were primarily sent to Eastern Europe as well as to several African nations. The Föreningen för Grafisk konst portfolios in 1960, 1969, and in 1990 all include sheets bearing graphic art by Kerstin Abram-Nilsson.

Kerstin Abram-Nilsson’s sheets of black and white graphic art focus on portrayals of multitudes where individuality is lacking. The images often portray themes of power and powerlessness. She used the whole surface when making her art which also contained a strong decorative element. Nature and people are always present. Kerstin Abram-Nilsson became interested in genetics and DNA during the 1990s leading to colour etchings such as Kromosom and To fight or not to fight. She willingly experimented with different mediums of expression in her graphic art, including blending the borders between original work and copies by producing signed Xerox-copies in considerable numbers. The led to turbulent discussions in the early 1970s.

During the 1971–1989 period Kerstin Abram-Nilsson was an enthusiastic instructor of graphic art at Konstfackskolan. She had an appealing charisma and encouraged her students to experiment. Further, she, along with Per Liljenberg and Kristina Munklinde, ran the annual graphic art courses held at Gerlesborg art school in Bohuslän.

Kerstin Abram-Nilsson produced public artwork on behalf of Statens konstråd. These included the painting Vilda och tuktade trädgårdar from 1978–1979 for Huddinge hospital and Utan titel, which consisted of four wall paintings and two pillar-mounted paintings created with the scraping method, for Frescati university library in Stockholm in 1983.

In 1997 Kerstin Abram-Nilsson was diagnosed with ALS. She continued working and submitted posters to an exhibition called Hjärtat sitter till vänster at Gothenburg art museum in March 1998. She completed a work involving four paintings of farmyards from different parts of the country and a tree of life for Linköping university hospital. She and her youngest daughter printed graphic sheets ahead of an exhibition which opened in October at Grafikgalleriet art gallery in Konstnärshuset that same year. The book Lyckliga ni som lever. Om rätten till vår död was posthumously released in 2003, containing diary entries and letters to friends and drawings as well as text written by her husband. Konstnärshuset held an exhibition in 2003 called Bilder av liv.

Kerstin Abram-Nilsson, whose work is held in various museum collections, died in 1998, then aged 67. She is buried at Salem cemetery. 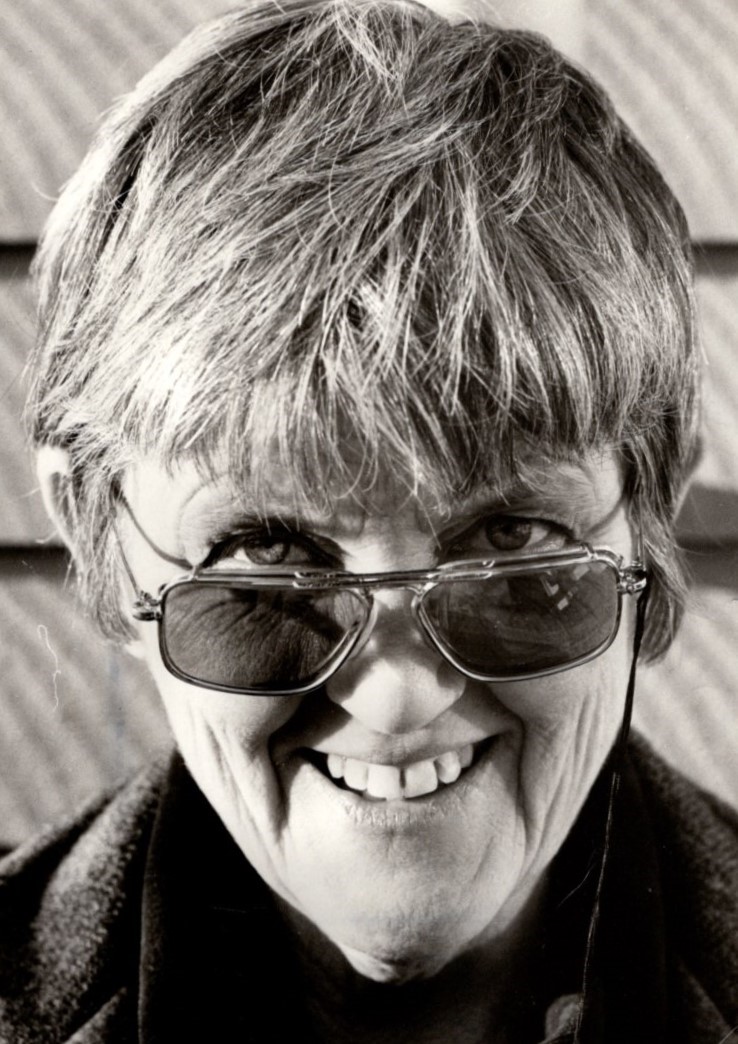