Kerstin Anckers was a calligrapher and one of the founders of the school of calligraphy in Stockholm called Skrivskolan. She is the person behind many texts on Nobel diplomas and was entrusted by the Skolöverstyrelsen with the task of developing a new style of cursive script.

Kerstin Anckers was born in 1931 in Stockholm. Her parents were Märta and Nils Anckers and she had one older brother. In her upper teens she drew croquis for Otte Sköld and attended courses in watercolour painting. In 1949, at the age of 18, she started attending the art academy Konstfackskolan (now Konstfack). The idea was to train as a drawing teacher but one of her teachers, the calligrapher Karl-Erik Forsberg, led her onto another path. As early as her time at Konstfackskolan, she accepted extra work as a scribe at the Ministry of Foreign Affairs where she wrote passports for diplomats among other things. From the court in 1950, she received the assignment of printing messages on parchment on the death of Gustaf V. These were then sent to several European monarchs.

When she turned 21 years of age, she attained her majority and moved to Vienna to be a calligrapher and letter artist. She attended the Höhere Graphische Bundes-Lehr- und Versuchanstalt for one year and then was accepted by the prestigious Allgemeine Gewerbeschule in Basel. There she carried out her studies following a timetable that was especially planned for her by Armin Hofmann, who was a graphic designer. Other teachers were the typographer and designer Emil Ruder and Théo Ballmer, professor and photographer. Once back in Sweden in 1954, she was given many assignments as a designer of texts for book covers.

Between 1957 and 1973, Kerstin Anckers was married to Per Lundahl and called herself Anckers-Lundahl. They had one daughter in 1965: Sara Kristina. For a time, Kerstin Anckers worked in Bonniers publishers’ artistic section and became the first woman designer in Sweden to be employed by a publishing company. During her active years, Kerstin Anckers was productive and created texts for bookplates, visiting and invitation cards, stickers and Christmas cards. She calligraphed monogrammes, hand stamps and diplomas, worked for Nordiska rådet, parliament, Statsrådsberedningen, the Swedish Academy, the Nobel Committee, museums and other cultural institutions.

Kerstin Anckers is probably best known for the many Nobel diplomas she calligraphed from 1962 until 1988. She wrote with a broad pen on matt calf parchment from England and herself chose the font she wished to use. She often worked with the artist Gunnar Brusewitz who painted the images for the diplomas.

Kerstin Anckers was engaged in 1971 by Skolöverstyrelsen, SÖ, to develop a new cursive script for the Swedish elementary school. The work was completed and implemented in 1975. The result, called SÖ style, was “a beautiful and timeless cancellaresca corsiva” that was adapted to the requirements of the time to be easily read and easy to write. Its introduction was however so controversial that many teachers did not think they had been given sufficient information by SÖ before the reform. Kerstin Anckers herself had five suggestions on how the situation could be saved, among others to motivate the teachers first of all and to separate reading and writing tuition. Skolöverstyrelsen cancelled the cursive script mandate in 1985.

Kerstin Anckers became a member of Stockholms Typografiska Gille in the 1970s. It had then been possible for women to become members only for a couple of years and she was one of the first. Between 1974 and 1979, she was the first woman chairperson of the Guild and later she held other posts, for example as ‘kalasfurste’ (lit. party prince, i.e. official in charge of festivities) and convener of an exhibition group. In 1974, she collaborated in the exhibition En bokstav ett skrivet ljud at Karby Gård in Täby along with Lars Laurentii, Annika Rückers and her old teacher Karl-Erik Forsberg, all calligraphers. A number of other exhibitions followed. At Galleri Ordfront, Kerstin Anckers exhibited calligraphy in 1986 and two years later, with the four designers Tom Hultgren, Johan Ström, Bo Berndal, and Örjan Nordling she was the only woman, exhibiting her “secret font/s”. After having taught at Konstfack, Beckmans Designhögskola and Ordfront, Kerstin Anckers started her own course enterprise in 1988: Skrivskolan. She ran it along with colleagues and they held courses in calligraphy, handwriting care, letter-drawing and gilding. In 1995, the school was converted into Kalligrafiska kretsen, a nonprofit association of interests that even today (2020) is active via FaceBook.

Kerstin Anckers shared her knowledge and skills in En liten tablå över alfabetets historia, in 1986. She also wrote and calligraphed the textbook Från A till Ö in 1992, that covers lettering, cursive script and calligraphy and is completely handwritten. 8 skrifter came out in 2001 and dealt with the history of the Latin alphabet.

During the 1990s, Kerstin Anckers collaborated in several exhibitions. At the Röhsska Museum in Gothenburg, she stood for the letter E in Kråkfötter och Krusiduller, at the typographical Galleri Hålet in Stockholm, she showed the letter D in seven different versions and at the Flora & Lettera gallery of calligraphy she had an exhibition with the typographer and designer Bo Berndal.

In 2000, Kerstin Anckers was the first woman to be awarded the Berling Prize. It was instituted in 1989 by Karl-Erik Forsberg who himself had designed the font Berling antikva (1951), the internationally most distributed and acclaimed Swedish font. The prize is awarded annually to an “eminent Swedish designer for exemplary design, technical skills and excellent treatment of letters”.

Kerstin Anckers died in 2012 at 81 years of age. Her gravestone is in English green slate with her own symbol and calligraphed name, all according to her own wishes. 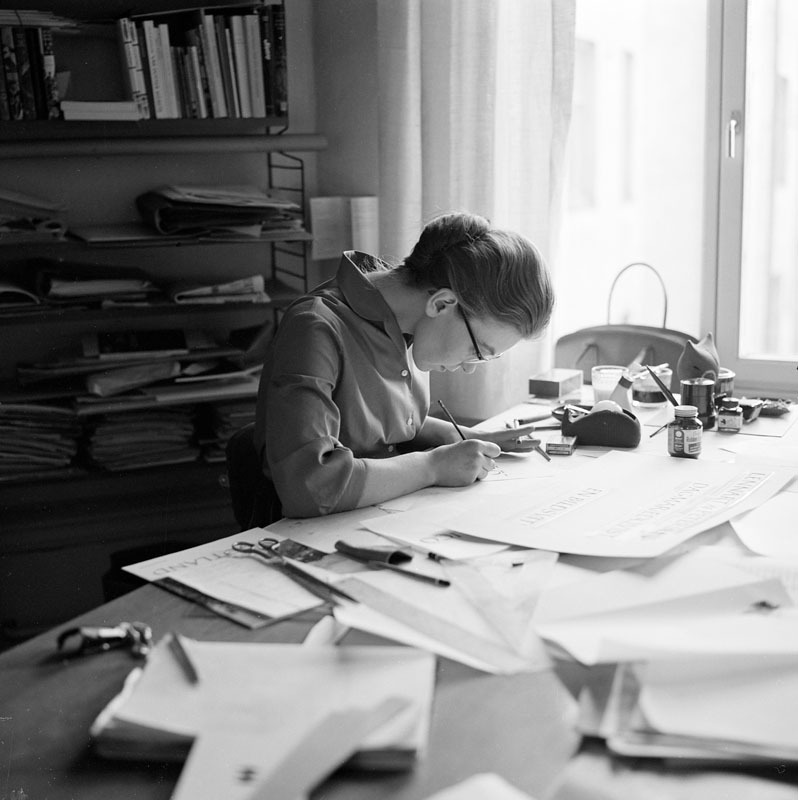