Kerstin Nordenstam was a docent of Nordic languages at Gothenburg university and a pioneer of gender studies within Swedish linguistics.

Kerstin Nordenstam was born and brought up as Kerstin Birgitta Kristenson in the Majorna area of Gothenburg. She was the daughter of Sven Kristenson, head of the town’s fishing port, and his wife Göta, née Olsson. Kerstin Nordenstam became, in 1955, the first woman in her family to matriculate in the classical section of Högre allmänna läroverket (advanced general school) in Majorna. Afterwards she read Nordic languages, English, and literature and poetry in the philosophy department at Gothenburg university, gaining her Master of Arts degree in 1960. Her studies also included a course in the history and theory of pedagogy. During the spring term of 1958 she studied English at Durham university in England, whilst also teaching Swedish to English students. Once she completed her university studies she then spent 1960–1961 working as an assistant teacher of Swedish and English at Sjöbefälsskolan (school of navigation) in Gothenburg.

Kerstin Nordenstam met the man she went on to marry during her university years when she was an active member of the student drama society. Her husband’s name was Tore Nordenstam and he was a philosopher. They married in 1959 and in 1961 they moved to the Sudan as her husband had gained a five-year contract at the university of Khartoum. Kerstin Nordenstam spent her time in the Sudan working fulltime as an English teacher, initially, from 1961–1962, at the Unity High School boys’ school – where she was the sole female – and subsequently at the Girls’ Secondary School, Omdurman, and at Khartoum North Secondary School from 1962–1966. Her daughter, Anna, was born in 1965. The family moved to Umeå from the Sudan in 1967 and there Kerstin Nordenstam was employed as an assistant teacher of Swedish and English at Mimerskolan whilst undertaking practical teacher-training at Lärarhögskolan. In 1968 the Nordenstam family moved to Bergen, Norway, as Tore had been appointed lecturer in philosophy at Bergen university and Kerstin Nordenstam gained a post there as associate professor of Swedish. In addition to her duties as a university lecturer in Bergen Kerstin Nordenstam also ran Swedish-language courses in the evenings elsewhere, such as at Trondheim university, Lärarhögskolan at Stord, and Folkuniversitetet in Bergen. Her tenure lasted 7 years and in 1975 Kerstin Nordenstam, now divorced, moved to Gothenburg with her daughter.

During Kerstin Nordenstam’s time in Bergen the women’s movement at the university expanded rapidly and she quickly joined the feminist group which was particularly active in the campaign for free abortions. The group also ran a series of public lectures on female writers and here too Kerstin Nordenstam played an important role. During the United Nations’ Year of the Woman in 1975 she participated in the first major Nordic women’s studies conference held in Nijmegen, the Netherlands.

The academic environment in Bergen had also inspired Kerstin Nordenstam to write a thesis. She gained her PhD in Nordic languages at Gothenburg university in 1979 with a thesis entitled Svenskan i Norge: språklig variation hos svenska invandrare i Bergen. The thesis dealt with the ways in which Swedes adapted linguistically to using Norwegian and some of her results revealed that adaptation occurred initially in vocabulary and then in grammar. Her thesis formed an important contribution to sociolinguistic studies as a whole and in particular to research in adaptation within two closely-related languages. Her investigation also gained international attention as a pioneering piece of work within sociolinguistic studies in Scandinavia. In addition to her doctoral studies in Gothenburg Kerstin Nordenstam also taught at the Nordic languages department and gave lectures, including at the Forum för kvinnliga forskare och kvinnoforskning (forum for female researchers and women’s studies), an association which she had helped establish in 1978.

Following her doctoral studies Kerstin Nordenstam was employed as a university lecturer, initially as a temporary lecturer within the Nordic languages department at Gothenburg university and at Journalisthögskolan (college of journalism), and then in a permanent lecturing post from 1988 until her retirement in 2000. In 1992 she was appointed docent in Nordic languages at Gothenburg university.

Her academic interest in the theory and methodology of conversational analysis emerged at an early point. She published a series of books and journal articles based primarily on everyday conversations. A constant theme of Kerstin Nordenstam’s academic output was her particular interest in linguistics and gender. Her early academic contributions include the books entitled Kvinnlig och manlig samtalsstil, from 1987, and Tag question och dylika påhäng i svenska samtal, from 1989, as well as the article “Hur talar kvinnor och män till vardags?”, published in Kvinnovetenskaplig tidskrift in 1989. Kerstin Nordenstam was one of the forerunners in recognising the differences between women’s and men’s conversations and it was not until several years later that similar themes began to appear in English-language research spheres, primarily in the book Women Talk, written by Jennifer Coates in 1996.

During the 1990s Kerstin Nordenstam ran several research projects, including one called Samtalsstrategier hos kvinnor och män i vardagliga gruppsamtal (female and male conversational tactics in everyday group conversations), which aimed at investigating how women and men used language to construct gender in group conversations amongst friends of the same sex. The project formed part of the interdisciplinary research programme Kvinnligt-manligt, funded by the faculty of the humanities at Gothenburg university from 1993–1996. One of the project’s focuses, called Gruppsam, was to assemble an extensive corpus of single-sex conversations between friends. This material was then used as an empirical basis to produce several publications, particularly the monograph entitled Skvaller: om samtalsstrategier hos kvinnor och män, from 1998. That book highlights how gossip is tied in with gender constructions and how those conversing together affirm and recreate moral norms through gossip. A subsequent broad research project, undertaken in conjunction with the high school-teacher Ingrid Wallin, investigated gendered patterns of conversation amongst high school-students, focusing on those for whom Swedish was their second language. The results were published primarily in the monograph entitled Osynliga flickor – synliga pojkar: om ungdomar med svenska som andraspråk, from 2002. In this work Kerstin Nordenstam was able to bring together her interests in multilingualism and gender by investigating linguistic and moral norms amongst high school youths from the immigrant community. Kerstin Nordenstam introduced new perspectives to her field of research in both of these books. In addition to her empirical research Kerstin Nordenstam also worked for Högskoleverket (National Agency for Higher Education) and Nationella sekretariatet för genusforskning (national secretariat for gender research) and was commissioned to write a book called Genusperspektiv på språk, published in 2003.

Kerstin Nordenstam had a large research network, both within Scandinavia and beyond. She was also one of the instigators of visits by guest researchers and hosted several international visiting researchers at her home institution. Further, she frequently organised conferences and also instigated the fourth Nordic conference on language and gender held at Gothenburg university in 2000. The following year she published the conference proceedings, Språk, kön och kultur, co-edited with her colleague Kerstin Norén. Her research interests and collaborative work took her out into the world and led to a stint as guest researcher in Melbourne, Australia during a couple of periods in the late 1990s and early 2000s. In 2009 Kerstin Nordenstam was awarded the Stipendium till Harry Martinssons minne (stipend in memory of Harry Martinsson) from the Swedish Academy in recognition of valuable contributions on behalf of the Swedish language.

She had a 30-year relationship with Sune Örnberg, an author and cultural editor, until the latter’s death in 2007. Kerstin Nordenstam died in Gothenburg in 2016 and is buried at Lundby nya kyrkogård (new cemetery). 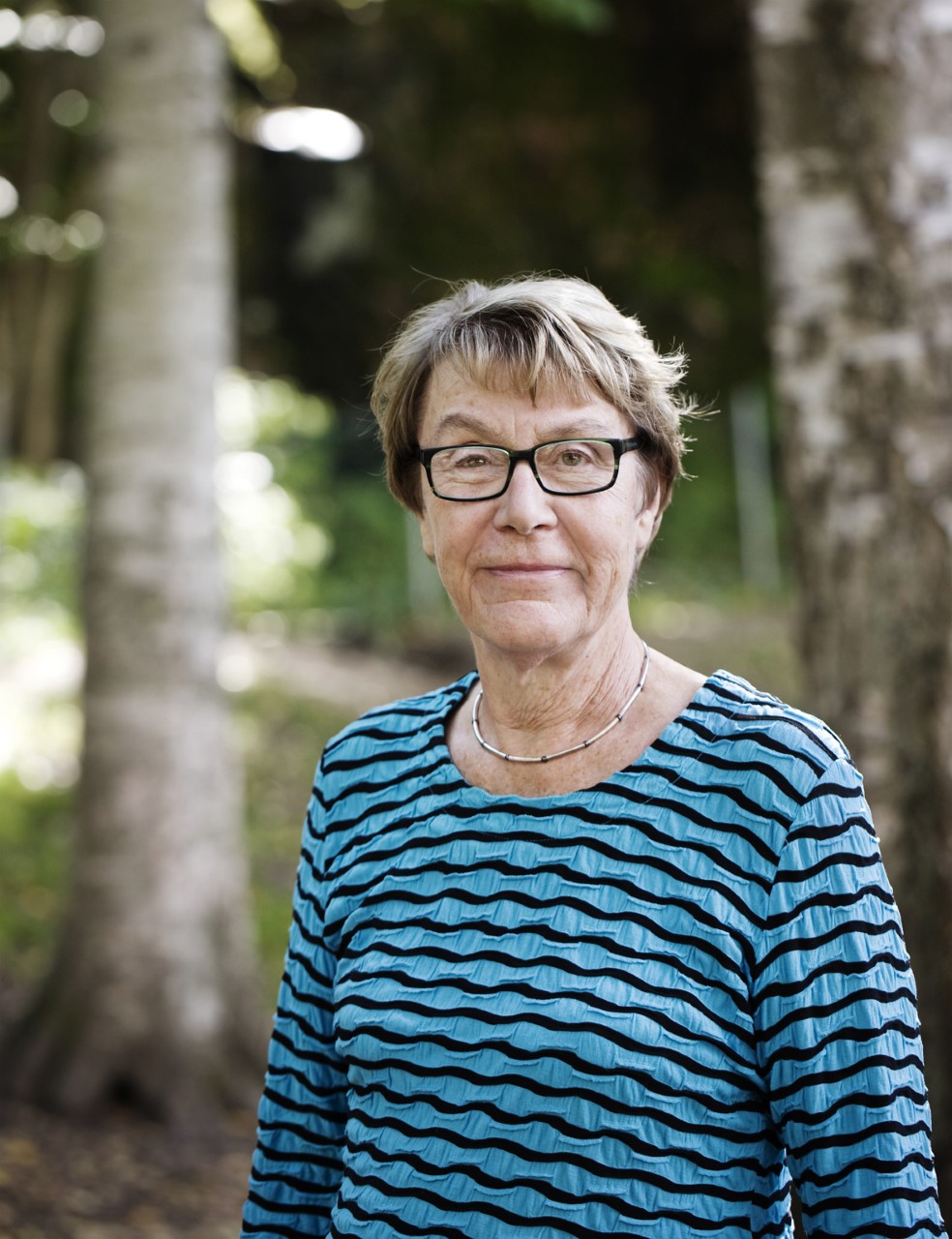