Kerstin Hörlin-Holmquist was a furniture designer and an interior designer for public spaces.

Kerstin Hörlin-Holmquist was born in 1925 in Arvika. She was the daughter of Tor Hörlin and his wife Greta. In 1950, while she was studying, she married the artist Erik “Truls” Holmquist. Two years later Kerstin Hörlin-Holmquist completed her studies at Konstfackskolan (University College of Arts, Crafts and Design), formerly Tekniska skolan.

Elias Svedberg, boss of Nordiska Kompaniet (NK), already noticed the young and talented Kerstin Hörlin-Holmquist while she was still studying. He subsequently hired her for NK where she spent many years designing furniture. The chair Charlotta was released in 1952 and hundred thousand copies of it were produced. In Finland alone, over a 20 year period, more than 200,000 copies of the chair were sold. During her time at NK Kerstin Hörlin-Holmquist also designed the chairs Adam and Eve, as part of the so-called Paradise series.

During the 1970s Kerstin Hörlin-Holmquist also designed beautiful pieces of garden furniture, called The Eden Collection. These were fashioned from beech wood, with pewter-encased legs and feet. Her designs became subject to illegal copying but she didn’t have the energy to initiate legal proceedings.

From the end of the 1970s until the early 1980s Kerstin Hörlin-Holmquist worked with Kooperativa Förbundet (KF) and produced the series Kära släkten. KF sought to offer alternatives to newly-produced so-called “epoch furniture” whilst also retaining a connection to old Swedish furniture traditions. During her later years Kerstin Hörlin-Holmquist collaborated with A&C Collection in Kristianstad who focused on selling entire interiors for offices and public environments. Kerstin Hörlin-Holmquist’s desk Regal and her conference table Arken, produced in Evert Olsson’s workshop in Karlshamn, came to be found in many Swedish managerial offices. She also created cloths that were sold by the metre, including Gripsholmsrutan for NK, and wallpaper. Further, she created entire hospital rooms and student accommodation.

It was not until late in her life that Kerstin Hörlin-Holmquist exhibited her work. Her first exhibition was “Kerstins Möbler” held in 1989 at Hantverksmuseet in Ängleholm. She displayed her own sketches, prototypes, furniture, mirrors, wallpaper, carpets and cloths. She included furniture from her and her husband’s summerhouse in Torekov. The contemporary interior architect for Statens fastighetsverk (the National Property Board of Sweden), Göran Faust, assisted in setting up “Kerstins Möbler”. He had often employed her when he needed to furnish Swedish embassies and official spaces across the globe. In 1992 a special exhibition of Kerstin Hörlin-Holmquist’s furniture, as well as her father’s paintings, was opened at Valdemarsudde in Stockholm. 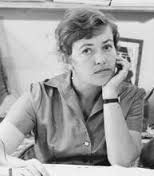