Kerstin Meyer was a Swedish mezzosoprano, an opera and concert singer. Her career spanned three decades. She gained recognition both at home and abroad for her performances of the classical mezzosoprano opera roles. She was also an entertainer in the folk parks and in musicals. She also sang in children’s operas and premieres of contemporary works. After her stage career, she was the principal of the Opera Academy in Stockholm in 1984–1994.

Kerstin Margareta Meyer was born in 1928 in Stockholm, the only child of Anna and Olof Meyer. Her parents ran a shop on Södermalm where they lived, but her father belonged to a family with several professional musicians. Her paternal grandfather, born in Poland, was a contrabassist and a violinist. He had founded an orchestra that toured throughout Europe and when it was disbanded, he happened to be in Sweden. By then he had met his wife-to-be and stayed in Sweden. Kerstin Meyer remembered a youth in which making music in the family was a matter of course. She started taking piano lessons when she was only five and attended performances at the Kungliga Teatern (now Kungliga Operan) as a little girl in the company of one of her paternal uncles, who was a good friend of the singers Einar Beyron and Brita Herzberg who provided him with free tickets.

When she left secondary school in 1948, she had already studied for one term at the Kungliga Musikhögskolan, where Arne Sunnegårdh was her voice teacher. Sunnegårdh was a versatile musician, active as both an accompanist and conductor, apart from being a successful voice teacher. She also studied at the Salzburg Mozarteum under Adelaide von Skilondz, as well as in Vienna, Rome and Siena.

During her years at the music academy, Kerstin Meyer and her student comrades Busk Margit Jonsson and Daisy Schörling established the trio Melody Girls. They toured in the folk parks, made records on their own and as background singers, or “doo-a, doo-a girls” as they were called at the time. However, studies at the music academy always came first and Kerstin Meyer’s career continued at a rapid pace after her graduation in 1952.

Kerstin Meyer made her debut at the Kungliga Teatern the same year as she graduated, but had what she called a “secret premiere” in December 1951, when she participated in the Kungliga Teatern’s annual performance of Handel’s Messiah in Stockholm Storkyrka, as the alto soloist. Other debutantes were Birgit Nilsson who sang the soprano part and Karl-Olof Johanson who was the tenor soloist. The veteran Joel Berglund, who was also the opera director at that time, sang bass and Arne Sunnegårdh conducted. Her student comrades Busk Margit Jonsson and Erik Saedén also participated in the performance, as did Elisabeth Söderström.

Kerstin Meyer’s official debut at the Kungliga Teatern took place on 11 September 1952, when she played Azucena in Verdi’s opera Il Trovatore. In a memorial programme for Set Svanholm on Sveriges Radio from 1989, she remembers how ridiculous she looked as a heavily made-up 24 year old who was supposed to be an old Romani woman. It seemed even more comical since she was playing mother to the evening’s troubadour Manrico, sung by Set Svanholm who was almost 50 years old at the time.

Only a couple of years later, she had her great breakthrough in the title role of Bizet’s opera Carmen in a new production directed by Göran Gentele. She sang the role 147 times at the Kungliga Teatern and the hero tenor Svanholm, who had been the opera director since 1956, not seldom sang her lover Don José. In the 1950s, etiquette required her to address Svanholm as either “Mr Court Singer” or as ”Opera Director”. On one occasion, when they were standing in the wings during a performance, she wondered whether it were not time to abandon this etiquette requirement with the following motivation: “Mr Court Singer, Opera Director, I’ve never kissed a man so many times as I have you without laying aside the titles with him.” Svanholm agreed instantly with a wide smile.

It was this same opera director who refused to allow Kerstin Meyer time off yet again. Her international career had been as successful as her contributions to her home stage and he was of the opinion that it was time for her to go out into the world. She was a member of the ensemble at Staatsoper Hamburg in 1958–1960 and 1964–1969. She had also made guest appearances at several of the world’s most famous opera houses and festivals: La Scala in Milan, Metropolitan in New York, Covent Garden in London, Wiener Staatsoper, Bayreuth and Edinburgh.

Despite her extensive international activity, many of Kerstin Meyer’s most important contributions took place at the Stockholm opera. Her career got started during what must be seen as a golden age for the opera house at Gustav Adolf Square. She recalled in an interview for Sveriges Television in 2013 that she herself, Kjerstin Dellert, Aase Nordmo Løvberg and Erik Saedén had all been accepted at the same time at the opera academy. She also had a fruitful collaboration with the soprano Elisabeth Söderström who was almost the same age but had made her debut several years earlier than Kerstin Meyer. Sixten Ehrling was the chief conductor at the Kungliga Teatern from 1953 until 1960 when he left Sweden to continue his career in the USA. He was succeeded by no less than Michael Gielen.

Kerstin Meyer’s early career also coincided with a period when the art of opera was changing to give scenic performance more importance. Up until the 1940s, singers were mainly expected just to sing, while their appearance and dramatic gifts were secondary. After the second world war, a new style of direction developed. It can be strongly linked to Wieland Wagner, the composer’s grandson, who at the reopening of the Bayreuth festival in 1951 launched a stripped and abstract scenography. In the USA, more traditional productions filled with props continued, but in Europe many directors wanted to renew the art form, just like Wieland Wagner. At the Kungliga Teatern in Stockholm, it was Göran Gentele who stood behind several of the memorable productions.

It was Gentele who had created the production of Carmen in which Kerstin Meyer made her breakthrough in 1954, and he was also responsible for the new interpretation of Verdi’s Un Ballo in Maschera produced in 1958, that received acclaim internationally. The opera depicts the attack on King Gustav III but on account of the political situation in Italy during Verdi’s lifetime the action had to be moved to the new world and its colonies since it was considered inflammatory to show the murder of a king on the theatre stage. In Gentele’s version, the action took place once again in Sweden and Kerstin Meyer sang the role of Mamsell Ulrica Arfvidsson.

Another significant director who had for a long time searched for a suitable work for his debut in opera was Ingmar Bergman. In Stravinsky’s The Rake’s Progress he found the challenge he had searched for, and Kerstin Meyer participated in the Swedish premiere in 1961 as the Turkish woman Baba. Bergman’s star status is clearly evident in the programme in which his name was printed with much bigger letters than either the conductor Michael Gielen’s or the composer’s, and in capitals.

The spirit of the times favoured Kerstin Meyer to the greatest possible degree. She had dramatic gifts with great range. In Gluck’s opera Orfeo ed Euridice she communicated with her whole body the severely controlled longing with which she approached her beloved to take her hand without breaking the prohibition against looking at her. Kerstin Meyer interpreted this classical role for contralto or mezzosoprano in two productions, at the Drottningholmsteatern and on a tour to France and England.

In the autumn of 1972, she sang Clytemnestra in Richard Strauss’s opera Elektra for the first time in Stockholm. In that new interpretation, her old student comrades Saedén and Kjerstin Dellert also participated, as well as Birgit Nilsson in the title role. Despite the fact that Birgit Nilsson was established as an international star and was performing in what was probably her foremost role achievement to date, it was Kerstin Meyer’s decadent and sensually overripe queen who made the greatest impression. Her costume, which was a trouser suit that left her breasts bare, was a sensation and was portrayed diligently in the reviews.

It was without a doubt Kerstin Meyer’s dramatic capacity that contributed to making her attractive in the less accessible repertoire and also newly composed works. During her years in Hamburg, she participated in the premieres of several operas: as Mrs. Claiborne in Gunther Schuller’s Die Heimsuchung in 1966, as Alice Arden in Alexander Goehr’s Arden Must Die in 1967, and as Gertrude in Humphrey Searle’s Hamlet in 1968.

Kerstin Meyer also suffered a number of setbacks in her long, and from a professional viewpoint, exceptionally successful life’s work. Her parents died in a car accident in 1961, which contributed to her leaving Stockholm for a number of years. In 1984, she was diagnosed with throat cancer and therefore had a very abrupt ending to her career as a singer. Her knowledge and long experience acquired a new forum however when she worked as the principal for the Operahögskolan in Stockholm in 1984–1994. She returned to the stage after many years in a triumphant appearance in a speaking role as Madame Armfeldt in the musical Sommarnattens leende at the Malmö Opera in 2013.

Kerstin Meyer was married to the culture journalist Björn Bexelius from 1974 until his death in 1997. She was awarded a number of distinctions during her career. She was made court singer in 1963 and the same year was elected a member of the Royal Swedish Academy of Music. In 1975 she was awarded the Litteris et Artibus medal. In 1985, she was made a Commander of the Most Excellent Order of the British Empire (CBE). She was given the title of professor by the Swedish government in 1987 and the Medaljen för tonkonstens främjande, the highest honour awarded by the Royal Swedish Academy of Music in 1999.

Kerstin Meyer died in 2020. She lies buried in Bromma Cemetery. 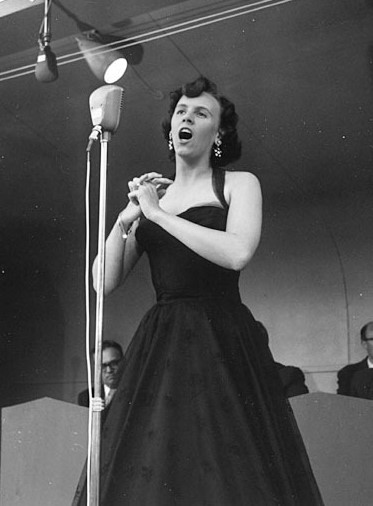