Klara Johanson was a razor-sharp critic, a brilliant stylist, and a lesbian forerunner.

Klara Johanson, or K.J. as she was often known, was born in a rear house just within Norreport in Halmstad in 1875. Although she left that town when she was 18 it played a large part in her life, and Norreport appears in most of her books. However, her childhood was a world apart from the route her life would take. Her family belonged to the middle class and showed little interest in literature.

Klara Johanson began school at an early age and – despite her family’s lack of enthusiasm for education – she was sent to girls’ schools. She then attended high school and in 1894 she became the first woman to gain her school-leaving certificate in Halmstad. She was considered something of a wonder-child and her reputation preceded her at Uppsala. She took it for granted that she would continue her studies there, although Lund was geographically closer and that at this time it was still unusual for women to attend university. In the autumn of 1894 there were 1448 students at Uppsala of which only 23 were women. Female students were not yet viewed as threats, but rather as interesting anomalies. Klara Johanson made an impression in the university town through her personality and her appearance: she was small in stature, had short hair, dressed boyishly, bore a pince-nez, and chain-smoked. She devoted variable attention towards her studies but was actively involved with both Kvinnliga studentföreningen (the female student association) and its chair Lydia Wahlström. Much later Klara Johanson would distinguish herself as a reclusive bookworm, but during her student years she was a sociable joker. Amongst other things she wrote a couple of burlesques for Kvinnliga studentföreningen – all-female just as the men’s burlesques were all-male. In 1897 she got her bachelor’s degree, majoring in Nordic languages and aesthetics and minoring in Latin, Greek, and theoretical philosophy.

Klara Johanson’s main interest lay in literature and she dreamt of becoming an author. Following a short stint at Krigsarkivet (the military archives) it was seemingly her literary ambitions which led her to seek out a position as journalist for Fredrika-Bremer-Förbundet's journal Dagny. For the most part Klara Johanson was genuinely uninterested in contemporary politics – apart from the women’s movement. After two years at Dagny she got a position at Stockholms Dagblad in the autumn of 1899. This was a major, conservative newspaper which was sometimes known as “the Swedish Times”. Initially she wrote short pieces on various topics but soon advanced to writing causerie-style articles and reviews. As such she became both loved and hated. She also undertook translation work, most successfully so with Henri Frédéric Amiel’s En drömmares dagbok, from 1900, which was published in seven editions over the course of her life. She also published essays in Ord och Bild. She would often write using false names or pseudonyms. Huck Leber was one of her most frequently used pseudonyms, which in turn took on its own identity as a male, decadent flaneur who could not have been more opposite to the real Klara Johanson.

During the early 1900s Klara Johanson published a couple of collections of her causerie-style articles, entitled Oskuld och arsenik in 1901, and Ligapojken Eros in 1907. These were both published under the pseudonym of Huck Leber and both comprised pieces which had already been published elsewhere. In 1907 she published Den undre världen, which is presented as the diary of a prostitute, but where the original text (if it ever existed) has clearly been heavily edited by Klara Johanson.

In the early 1900s Klara Johanson began to struggle with the hectic newspaper environment. She became physically unwell during the most intensive period of reviewing duties – she herself called it a ‘reviewer’s disease’, which were probably symptoms of stress. She gave up her job at the newspaper at new year in 1911, although she was allowed to keep her salary for a few more years as long as she promised not to write for other dailies.

Her final years at Stockholms Dagblad coincided with an important turning point in Klara Johanson’s private life. Her relationship with Lydia Wahlström had ended when she finished at Uppsala and she had been intensely unhappy for a few years afterwards. In 1907 she got to know Ellen Kleman, who was active in the women’s movement, an author, and the new editor of Dagny. The attraction was mutual and in 1912 they moved in together. Ellen Kleman became Klara Johanson’s main support – she was a practical, comforting presence who took care of everything that the impractical reviewer either could not or did not want to deal with. The couple also socialised heavily with other female cultural celebrities. They lived together until Kleman died, albeit this did not prevent Klara Johanson from entering into a long-term simultaneous relationship with the sculptor Sigrid Fridman. It was through her relationship with Sigrid Fridman that Klara Johanson began taking an interest in public art and promoting Fridman’s sculptures of Fredrika Bremer, and others.

Klara Johanson had her own library in the apartment she shared with Kleman. She began to foster an image of herself as a recluse who locked herself away in order to spend time with her books. She would describe some of her favourite authors – including Goethe and Bremer – as her “eternal supporters”. She wrote intermittently, producing essays and working on her aphorisms. During the 1910s she and Kleman obtained funding in order to publish Fredrika Bremer’s Brev – this was a Sisyphean task in which Kleman handled the dull routine necessities whilst Klara Johanson wrote the commentary. In conjunction with this work she also published two of Bremer’s books, namely Det unga Amerika, in 1927, which took the form of excerpts from Hemmen i den nya verlden, from 1853–1854, and England om hösten år 1851, from 1922, which was the first book edition of Bremer’s radical articles on her visit to England. Klara Johanson’s and Ellen Kleman’s efforts on behalf of Bremer cannot be over-estimated – they appear to have saved Fredrika Bremer from being forgotten through their publications and the interest they generated through the journal Hertha, amongst other things.

During the 1920s Klara Johanson found new outlets for her written work, including Svenska Dagbladet in which she published feature articles, and in the newly-established feminist daily journal Tidevarvet to which she submitted ‘Anmärkningar’, a crossover between causerie-type articles and a full-on column. Her collection of essays entitled Det speglade livet, from 1926, became her major public breakthrough – unexpected as far as she was concerned, but not to others. The collection comprises thematically arranged essays, a few pieces of fiction, autobiographical sketches, and some aphorisms. The collection also included the sentence which came to be seen as the key to Klara Johanson’s writing: “Till sist blir allting litteratur” (in the end, everything is literature). She was awarded a prize from Samfundet De Nio (the Nine Society) and the Swedish Academy, reflecting that she had won public recognition. Klara Johanson became a literary celebrity and was asked to write forewords to classics and was approached by aspiring writers who sought authoritative affirmation. Klara Johanson’s collection of aphorisms, En recensents baktankar, from 1928, only further cemented her new reputation.

Klara Johanson always described her output as sparse, which is not actually correct. During the 1930s, however, her publications became more sporadic. She carried on working for Tidevarvet for a little while longer and published a number of contributions in Föreningen Gamla Halmstads årsbok. Darker times were encroaching and not even the usually politically unaware Klara Johanson could avoid what was going on. Oppression and human suffering became visible to her when Ellen Kleman began to devote herself to assisting refugees once she had retired, and this sometimes took place in their own home. However, Ellen Kleman, a sociable, active woman, fell ill and died in 1943. Klara Johanson was left alone and unhappy, despite her supportive friends. She produced one further collection of essays, Det rika stärbhuset, in 1946, and this generated renewed attention and the sole interview that has survived.

Despite falling ill herself Klara Johanson carried on working on her final book, Sigrid Fridman – och andra konstnärer. It was published in September 1948 when she was a patient at the Karolinska hospital. It was there that she died on 8 October 1948, two days after her 73rd birthday. Klara Johanson is buried at Solna cemetery. In her native town of Halmstad a street, a high school, and a room in the city library have all been named after her. 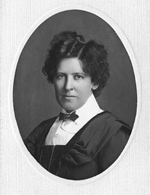