Klara Lindh was a pioneer of the women’s suffrage movement.

Klara Lindh was born in Kungsholmen in Stockholm in 1877 as the daughter of the factory owner Bengt Nilsson Hemberg and Clara Charlotta Karlsson. As the lastborn in her family she was twelve years younger than her sister and nine years younger than her brother. The Hemberg family lived on Ladugårdslandet and then moved into central Stockholm to Vallingatan 17. Klara Lindh was brought up within a business environment and had access to all that a city could offer. She was 16 years old when she enrolled at Franz O. Ebel’s business school in Stockholm to study bookkeeping.

In Stockholm Klara Lindh came to know the journalist Karl Magnus Lindh. He had gained a degree in theology at Uppsala University, which was unusual for journalists at that time. In April 1896 he was appointed editor-in-chief of Gefle Dagblad, which had been established just a year earlier. In February 1897 he and Klara Lindh got engaged. They married in November that year and went on to have three children together, daughters Greta and Karin and a son Gunnar.

Klara Lindh is mainly known for having initiated a series of articles commissioned by Landsföreningen för kvinnans politiska rösträtt (LKPR, National Association for Women's Suffrage). These articles were written by a number of well-known Swedish authors and writers who expressed their views in favour of women’s suffrage. Over 35 newspapers, most of them liberal, bought in the series which began in 1909 and continued until 1920. It comprised one article every month and a total of 129 articles by 45 authors were written. 40 of these authors were women and the remaining five were men. The majority of the articles were written by the figurehead of the suffrage movement Ann Margret Holmgren, who supplied 14 articles. Frigga Carlberg wrote 12 articles, Gulli Petrini wrote 10 and Ellen Hagen wrote eight. It was up to Klara Lindh and her colleague Gerda Modén to decide which of the received articles were to be published. In some cases they presumably approached people directly whom they knew to be favourable towards women’s suffrage and asked for contributions.

Elin Wägner, who provided two articles herself, wrote in a letter to the “general of women’s suffrage” Signe Berman that “the contents of that series are quite important”. The articles concerned not just suffrage in Sweden and internationally, but also related political and social topics, such as the prospects for peace during the First World War.

The articles were distributed as follows: Klara Lindh and Gerda Modén supplied the articles to Gefle Dagblad, which could publish them free of charge as long as the newspaper also made proofs that could be posted to other newspapers, which paid for submissions. The technology of making copies was not yet in use. The article series was likely unique in that it was a political campaign which made a profit. When the series ended in 1920 Gerda Modén reported to Centralstyrelsen that it had supplied the movement with an extraordinary amount of propaganda as well as a “not insignificant surplus” of 1595 kroner.

Klara Lindh penned two articles herself for the series, first published in Gefle Dagblad on 16 and 17 February 1912, and later collated in a small offprint entitled Svenska kvinnorösträttrörelsens historia i korta drag. In it she began with Fredrika Bremer and then described the movement’s inception and growth. She gave accounts of motions and defeats in parliament. The movement included academically trained historians but it was the young Klara Lindh who was responsible for determining the important aspects of the historiography which could increase knowledge and self-awareness within the movement. Four years after her death a continuation of the history was written by the aforementioned Ann Margret Holmgren, who began by referring to Klara Lindh’s writing.

Klara Lindh was not just responsible for this major series of articles. She was also the main driving force within the suffrage association in Gävle, which at the time was Sweden’s largest town north of Stockholm. In 1905 she was elected onto the board as a deputy and as vice-secretary. From 1909 onwards until her death she was its chair. She also led the movement’s county association in Gävleborg. Klara Lindh further wrote the basic course text for a course on social issues within the municipality and politics, which was organised in Gävle in 1908. Women came from across Sweden to attend it.

When Klara Lindh died it was right in the idle of one LKPR’s two large petition campaigns. Gerda Modén took over both of those as well as the running of the local association. They managed to gather 18,666 signatures nation-wide. An early local historical account recorded that “we did not really understand the extent of Mrs. Lindh’s significance to the association until she passed away”. A later historical report describes her as the soul and driving force of the association: “Her strong sense of justice, her clear and logical intellect, along with her ease of speaking and her ability to win over others, all these combined to make her the perfect leader”.

Klara Lindh underwent a stomach operation and died shortly thereafter on 8 March 1914 from sudden internal bleeding. She was only 37 years old. Her husband Karl Magnus Lindh was deeply impacted by the loss of his wife and appeared to lose all his strength. He died in December 1918. Klara Lindh’s death also came as a shock to her many colleagues within the women’s suffrage movement, as is clearly apparent in Elin Wägner’s memorial entitled “En ädel kvinnas gärning”, published in Idun on 22 March 1914. “Through Klara Lindh’s death the Swedish women’s suffrage movement has lost one of its most skilled, most loyal and most self-sacrificing workers, and – what is most difficult to take – has lost her so young”. Gerda Modén took over both responsibility for the article series and as the chair of the suffrage association in Gävle after Klara Lindh’s death.

In 2008 the annual Klara Lindh stipend of 50,000 kroner was established. It is awarded to the journalist from MittMedia who during a given year has, in Klara Lindh’s spirit, “made a meaningful contribution to journalism on behalf of democracy and the equal representation of all people”. 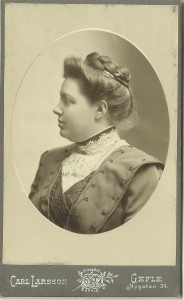