Lea Ahlborn was a medal engraver and the first woman to be appointed to a civil service job in Sweden.

Lea Ahlborn’s father was Ludvig Lundgren, an engraver for the mint. Her mother was an artist. During her childhood Lea Ahlborn displayed a serious interest in art and received instruction from her parents. In 1849 she was given special dispensation, because she was a woman, to attend formal teaching as an extraordinary student at Konstakademien (the Royal Swedish Academy of Fine Arts) in Stockholm. Her teacher at the academy was Carl Gustaf Qvarnström. He encouraged her in her efforts, and, once she had completed her studies, Lea Ahlborn and her brother Pehr Henrik accompanied Qvarnström to Paris, where she continued her learning. In Paris she worked for the sculptor Toussaint, the coin engraver Barre, and the medal engraver Johan Salmson, who was also her maternal uncle.

Lea Ahlborn’s father died in 1855 and her brother passed away shortly thereafter. It had originally been intended that her brother would succeed her father as an engraver for Kungliga Myntverket (the royal mint). Given that no other male successor was present Lea Ahlborn got the job. She thereby became the first woman to be appointed to a position in the Swedish civil service. For the next four decades she was responsible for creating all Swedish coins, during which time she also designed more than four hundred commemorative and merit medals.

Lea Ahlborn kept herself abreast of developments in her profession and contributed to the development and improvement of Swedish medal engraving. She created the stamps for every Swedish coin produced during the second half of the 1800s as well as the majority of medals —around four hundred — which were made in the country during that same time period. She also undertook work on behalf of other Swedish institutions such as Svenska Akademien (the Swedish Academy), Vetenskapsakademien (the Academy of Sciences), and Kungliga Sällskapet Pro Patria (Pro Patria royal society). She further engraved the stamps for Norway’s gold coins and produced the first run of Finnish coins, following Emperor Alexander II’s 1860 decree that the markka would be the Finnish unit of currency.

Lea Ahlborn was elected into Konstakademien as a member in the same year that she was appointed to her position at Kungliga Myntverket. She became a member of Kungliga Akademien för de fria konsterna (the Royal Swedish Academy of Fine Arts) in 1881. She became an honorary member of the Imperial Academy of Arts in St Petersburg in 1878. She also received several medals herself, such as the Litteris et Artibus in 1863 and the Illis quorum in 1883.

Due to her being the first woman to gain a civil service position in Sweden, an intense discussion arose around the time of her nearing the pension age, concerning whether she should be entitled to continue to receive two-thirds of her salary, a benefit awarded to her male counterparts. The discussions regarding her pension involved Myntdirektionen (the executive at the mint), Statskontoret (an authority connected to the state treasury) and Statsutskottet (a parliamentary committee), and was also brought up in parliament. The issue was never resolved, as Lea Ahlborn was still working when she died of a brain haemorrhage in 1897. 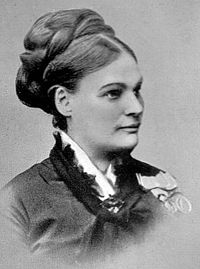