Lili Ziedner was one of Sweden’s most striking comediennes, a veritable clown who was performing long before our contemporary equivalents.

Lili Ziedner was born into an artistically gifted family. Her parents were Ida Kristina Johansdotter and Thor Edvin Anders Ziedner, who was, among other things, a journalist on the major Swedish daily newspaper Dagens Nyheter. Her brother Edvin Caesar Napoleon Ziedner was a bandleader and composer. One of her sisters, Sigrid (Karin), was a music teacher. She had two more sisters as well, Signe och Dagmar.

Lili Ziedner trained at the Dramaten theatre school, worked for a time as a proof reader at Dagens Nyheter and was given engagements by theatre king Albert Ranft at Vasateatern. Early in the 1910s, she made a guest appearance at Apolloteatern in Helsinki where Mauritz Stiller, who was then at Svenska Teatern, discovered her. According to available information, he wanted to make her into a female Chaplin. The result was that she participated in some of Stiller’s first films of which only one was really completed, one that was written by Lili Ziedner herself: Den moderna suffragetten in 1913. It was a film that has now completely disappeared but that according to the sporadic source materials available made fun of the then modern suffragette movement in English style. The anonymous reviewer in the Upsala Nya Tidning considered that it was an ingenious and cheerful mockery of the suffragette movement. A couple of critics remarked that she exaggerated quite atrociously. We may suppose in hindsight that the exaggeration was a very conscious strategy to emphasise the satire.

Lili Ziedner had her great breakthrough later in Cabaret Läderlappen in 1917. There the eyes of the audience were opened to her idiosyncratic artistic personality. Later she became a great star when working with the famous Swedish revue king Karl Gerhard during the years 1921—1931. She was able to allow her originality and her strong personal gifts to blossom before the eyes of the audience through her satirically conceived characters stamped with her tart, precise delivery of her lines. Unlike other comediennes, who based their comedy on the security of the folk burlesque, like Dagmar Ebbesen or Julia Cæsar, Lili Ziedner was an intellectual, reflective type. She made her breakthrough as a revue actress, but it was only when she was able to turn directly to the audience with her polished delivery of lines that she blossomed fully. For Karl Gerhard she was able to create numerous basically malicious caricatures that even so had a tone of self-irony. A parade of bitches was lit up from within by a humour that can only be produced by a good-hearted person. This self-reflective, distancing and ironic attitude also permeated her autobiography, I lögn och ro from 1930.

As with many clowns, there was a bottomless black hole in Lili Ziedner’s comic creations. Upon her death, Brita von Horn wrote that Lili Ziedner, who herself had delighted the whole of the Nordic region with her brilliantly hilarious humour, her wit and her fanciful ideas, was herself like all great comedians not a happy human being. Deep down, a dark seriousness lay brooding. For those who counted themselves as her friends, she could lift off her inimitable clown mask and bare a lonely heart whose undisguised struggle could fill people with tenderness. Her addiction to alcohol contributed to this, and probably led to her premature death from liver cirrhosis.

Most of Lili Ziedner’s scenic art has nowadays disappeared, including many of her film appearances. She played a few roles in films that became real scandals. The first was Cirkus Bimbini from 1923 that has disappeared and that belonged to the most scolded films of the 1920s. It was generally considered to have broken records when it came to childishness, clumsiness and meaningless higgledy-piggledy comedy in a low-down and seamy framework, according to the critic Jens Björneborg in Nya Dagligt Allehanda. Björneberg considered however that Lili Ziedner was the only person to have any kind of grip on that genre. An anonymous pundit in the major Swedish daily newspaper Sydsvenska Dagbladet considered that the only bright spot was in fact Lili Ziedner’s irresistible small-town mayoress with her constant nagging about moral decency.

The other scandal film is the one that according to a tenacious myth is asserted to have been the most scolded in Swedish film history, namely Pensionat Paradiset from 1937. With the exception of Carl Björkman’s flare-up in Dagens Nyheter, the film was however received with a certain dubiousness in most cases. In a few cases, there was an intimation among critics that it might be a matter of parody. The film has attained cult status nowadays, even if only on false grounds. It is not a so-called pilsner film as it has been advertised as being in later DVD editions. It is on the contrary a bloody parody of contemporary Swedish film, among others the burlesque that more traditionally has been given the epithet pilsner film. Inspiration for the film came from the west, from American crazy farce that Robert Wahlberg, one of the authors, had experienced. Additionally, all the characters are exaggeratedly played in a purely parodic way. Not least Lili Ziedner’s character Fröken Cronblom is closely related to many of the characters she had played earlier on the revue stage.

Fröken Cronblom is a guest at the boarding-house, presented with the mask of pomposity characteristic of the burlesque theatre’s traditional picture of ladies from high society. In an inimitable way, while reading the newspaper, she pronounces lines about “there being so awfully few deaths today” (sometimes these lines are wrongly attributed to Julia Cæsar). However, she is punished for her arrogance in a palpable way. She rubs shoe cream into her skin in the belief that it is sun cream, and has obvious problems with a collapsible deckchair with which she gets entangled. At the same time, we have here evidence for Lili Ziedner’s well-developed feeling for pure, true clownery without the forced artificiality that is often mistaken for humour.

Lili Ziedner died in 1939. She is buried at the Northern Cemetery in Solna. 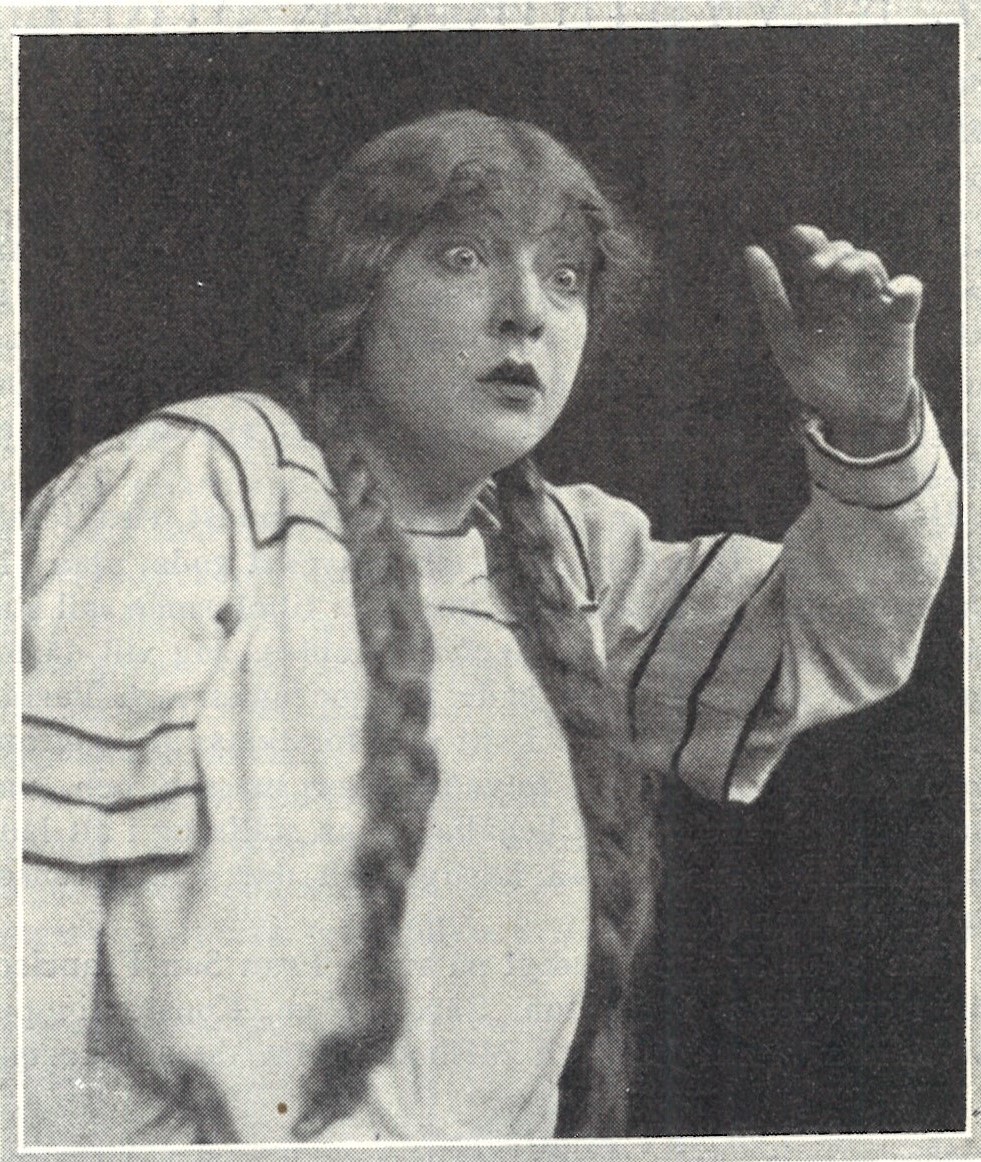 Lili Ziedner as one of her comedic characters, the opera singer, depicted in the magazine Scenen, 1923. Photo: Almberg & Preinitz