Lilli Zickerman was born in 1858. She grew up in Skövde. She was the daughter of Carl Petter Zickerman, a pharmacist, and his second wife, Hedvig Malmgren who raised Lilli Zickerman along with her three brothers.

During the 1880s Lilli Zickerman studied at the Handarbetets Vänners (HV) (friends of handicrafts society) Sy och Vävskola (sewing and weaving school) in Stockholm. Upon returning to Skövde in 1886 she advertised in the local papers and offered courses in the arts of weaving, sewing, and lace-making following to the Handarbetets Vänner method. From 1887 until 1897 Lilli Zickerman ran an embroidery shop called Byrå för Handarbeten. During the first two years she had the support of Agnes Behmer, who had trained at Tekniska skolan (now known as Konstfack – school of arts, crafts and design) in Stockholm. The shop sold items they had designed themselves as well as materials for handicrafts, such as yarns, silks, and canvases.

Lilli Zickerman submitted her creations and textile works to the 1896 Malmö Industriutställning (industrial exhibition). She sold one of her products to the then Crown Prince Gustaf, who had attended the exhibition along with his brother, Prince Eugen. That same year she went on a stipend-funded journey to London to undertake museum studies. In 1897 Lilli Zickerman was employed as a prize judge and judge of all the exhibited goods at the Skaraborg county handicrafts exhibition. She also submitted work to a non-competitive exhibition which was then selected to be displayed at Allmänna konst- och industriutställningen (general art and industrial exhibition) as part of the 1897 Stockholm exhibition. The items on show comprised her own collection of embroideries. She was awarded a silver medal in recognition of good quality home-produced work. That same year Lilli Zickerman and her parents moved from Skövde into Stockholm.

Lilli Zickerman was heavily impressed by the Stockholm exhibition which had included displays of handcrafted items from the countryside, including a mix of older pieces used as the background for newer work which was for sale at prices set by the handicrafters themselves. Lilli Zickerman described these pieces as very skilfully made but “often terribly ugly and completely unsuitable for the tastes and lifestyles of the wider public which the handicrafters had counted on winning over in order to earn something for their work”. Lilli Zickerman believed that in order to successfully profit from their handcrafts they needed an intermediary who could advise them on how to attract customers through the appearance and utility of their goods. She herself claims that this was how the idea came about to set up what eventually became the Föreningen för Svensk Hemslöjd (Swedish handicrafts association), an organisation which fulfilled the need for an intermediary between handicrafters and their customers.

Föreningen för Svensk Hemslöjd was founded on 7 October 1899. Prince Eugen was its chair and Lilli Zickerman served as the manager of the Stockholm-based shop which the association opened. Temporary premises were acquired in order to open a shop for the Christmas trade. Lilli Zickerman used the catalogue from the 1897 exhibition in order to procure products for the shop, connecting with weaver women and handicrafters who had been involved in the Stockholm exhibition. This enterprise, which gradually expanded under Lilli Zickerman’s guidance, offered items which were produced by a network of handicrafters. They were instructed as to what their products should look like so that they offered both high aesthetic value as well as quality in terms of production and materials. Föreningen för Svensk Hemslöjd was involved in exhibitions in Sweden and beyond and it came to define style parameters through its aesthetic programme, based on old tried and tested traditional and handicrafting techniques, local materials, and aesthetic artistic expression. This programme entailed that items should be fit-for-purpose, useful and be neatly finished. The exhibitions allowed coherent fittings to be put together with whole pieces of furniture, hand woven curtains, and rugs. The association’s method provided a role model for other handicrafts associations which were set up throughout Sweden and which formed a network of shops selling their goods. Lilli Zickerman ran the Stockholm shop until 1914.

Lilli Zickerman became familiar with various places thanks to her travels across Sweden on behalf of the Föreningen för Svensk Hemslöjd shop. She became particularly attached to Vittsjö in northern Scania. In 1908 she purchased a cabin with a plot of land there. She had a house built, called “Sommargården”, which was later added to with a building to house a weaving school, completed in 1912. Weaving classes began to be offered at Vittsjö in 1908 and woodworking classes became available from 1910 onwards. During the early years Elsa Gullberg ran the weaving school, later succeeded by Märta Måås-Fjetterström. Lilli Zickerman’s brother, Tage, was in charge of the woodworking classes. The teaching programme also included lectures by Lilli Zickerman for the students’ benefit.

Föreningen för Svensk Hemslöjd had set up a prototype weaving facility in 1905 and this was transferred to Vittsjö. Test woven pieces were produced in order to determine how long they took to create and the material required; access to specialist tools was ensured; mangles and other implements necessary for production were available, whilst a dyeing operation was set up in order to enable the use of permanent colours. Trained artists, such as Märta Gahn who worked at Vittsjö for a year, were employed by the association in order to lead the work.

Lilli Zickerman, as an ideologue within the sphere of handicrafts, highlighted the social function of the activity and how it – as long as it was properly organised – served as a form of self-help. Although it was important to study, identify, document, and encourage local handicrafts it also needed to be reformulated in an artistic direction. It was similarly important to study old forms of handicrafts in order to encourage new developments. Lilli Zickerman emphasised the importance of artistic guidance – she believed that whilst the handicrafters were best qualified in techniques, the artists excelled in the aesthetics.

When Hemslöjdskommittén (the handicrafts commission) was set up in 1917 an enquiry was commissioned. Lilli Zickerman was not only given a prominent role within the enquiry but also the opportunity to draw up national guidance for the ideological approach to the description and creation of Swedish handicrafts. She, for example, considered that the technique of crocheting did not belong within the sphere of handicrafts and that bobbin lace-making should instead be highlighted for the ancient technique it was, representing centuries of implementation in Sweden. Bobbin lace-making in Scania, in Dalarna, and in Vadstena took different forms and these were encouraged by the handicrafts movement. Colours were similarly important. Lilli Zickerman recommended the use of plant dyes to create gentle colour nuances, as opposed to the modern aniline dyes which she called “påsfärger” (bag colours) which generated “shouty” results.

After resigning from her position as manager of Föreningen för Svensk Hemslöjd shop Lilli Zickerman began to work on creating an inventory of Swedish popular textile art. This became one of the most comprehensive cultural historical inventories ever produced in Sweden. She undertook this work during the 1914–1931 period and it involved documenting around 24,000 textile items. She did this in the field by taking black and white photographs of the items and taking tiny clippings of threads to provide the colours. The photographs were developed and partly hand-coloured in order to emphasise the colours and patterns. They were then glued onto folio-sized sheets of cardboard so that every separate textile piece could be described. These cardboard sheets were arranged according to technique and countryside location. The intention was to present the results of this inventory as a multi-volume set comprising 27 volumes, which could then be used as the basis of new designs and new product development. However, only the first section on “röllakan” (a kind of kilim weaving) was ever published, in 1937.

Lilli Zickerman has described how she began to photograph woven items in 1910 but that the photographs were too small. She then got the idea to enlarge the images and colour them afterwards. Lilli Zickerman methodically sought textiles for her inventory which she deemed were Swedish and represented a local area, were of folkloric origins and artistic in their expression. The manuscript provides an analysis and synthesis of the textiles and their technical and aesthetic form, and makes reference to the images contained within.

In collaboration with the Pathé Frères film company Lilli Zickerman made a documentary film on Swedish handicrafts in 1917. Several of the activities filmed were undertaken in association with the weaving and woodworking school in Vittsjö. These were things like plant-based dyes, the brushing of rugs, spinning, fringe-tying, weaving, producing wooden clogs, shearing sheep, preparing wool, carding, spinning, ribbing, preparing flax, and bobbin lace-making in Scania, Vadstena, and Dalarna. The collected material in the inventory, the photographs, the manuscripts and films, are all currently held in the Nordiska museum archives. Some copies of the photographs are also held in an academic collection at Konstfack (school of arts, crafts, and design) in Stockholm. This material has been digitized.

Apart from her inventorying efforts and her engagement in the weaving and woodworking school at Vittsjö Lilli Zickerman was also active in other, smaller wide-ranging projects. For example, she was in charge of running the handicraft exhibition at Skara in 1924 on behalf of the Skaraborg county handicrafts association.

Lilli Zickerman moved back to Skövde in 1946. She died three years later. She is buried at S:t Sigfrid’s Cemetery. A memorial stone was raised in her name in 2003. 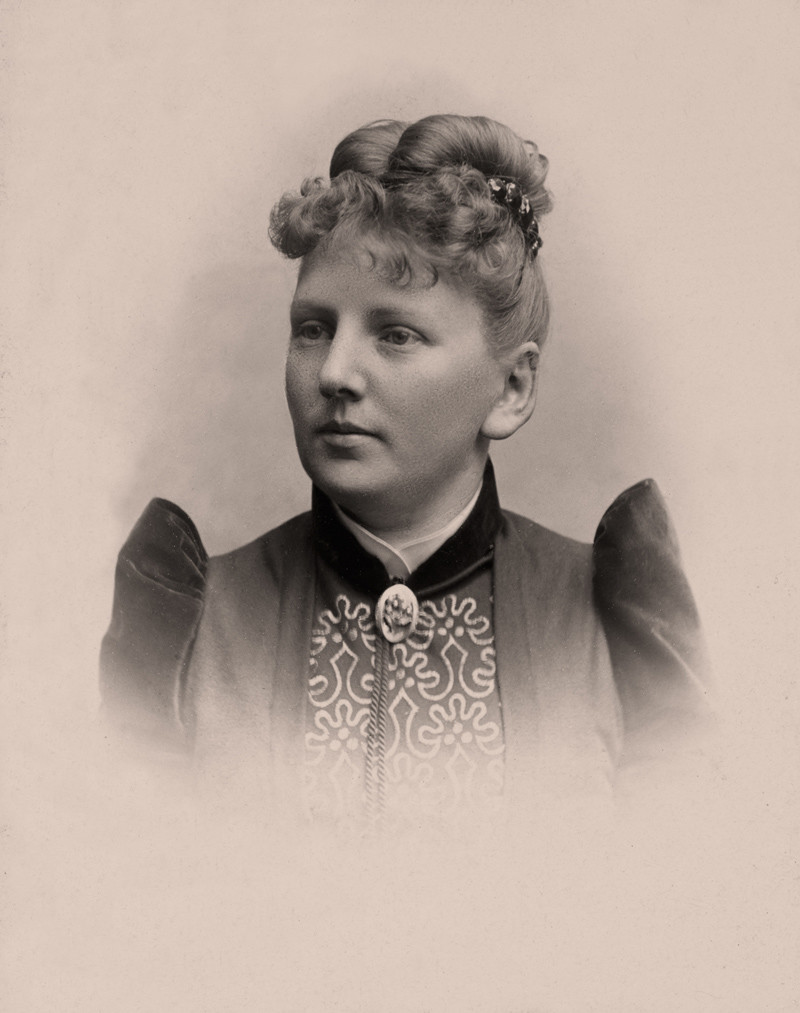