Lina Sandell-Berg was one of the most prominent and best-loved hymn-writers of the 1800s.

Lina Sandell-Berg grew up in Fröderyd parsonage in Småland. Her childhood home provided both an intellectual and practical environment at a time when clergymen and their families largely provided for themselves by working the land. Fellow clergymen often visited the home and the poet Esaias Tegnér – then bishop of Växjö – was a frequent guest. Jonas Sandell, as a curate at the cathedral, had received Tegnér’s daughters for their confirmation. He was a qualified teacher and he began to instruct Lina Sandell-Berg when illness necessitated that she be relieved of household duties and she began to take an interest in studying. She had her own desk in his home office.

Lina Sandell-Berg had already begun to compose poems and morality tales whilst she was bedbound and kept indoors by her illness. Her unpublished diary, now held within the Lund university collections, provides a unique testimony to a young woman’s struggles with life’s great issues. She read extensively. When she was twelve years old she read Eugène Sue’s novel, Les Mystères de Paris, which described that city’s underworld, and aged sixteen she pondered over Johann Wolfgang von Goethe’s Wilhelm Meisters Lehrjahre. She asked herself whether it was right to read it with such pleasure given that it was of little real purpose. The same was true of her studies of languages, geography, and the natural sciences. When she was seventeen years old Lina Sandell-Berg eventually came to the realisation that the belief that women became arrogant by taking a broader view of the world around them and seeing the Creator’s almighty power had to be wrong. She commented on Madame de Staël’s perusals on Goethe’s Faust in De l’Allemagne and wondered at Esaias Tegnér’s elevation of Goethe as the ultimate poet. Fredrika Bremer served as her personal role-model.

Lina Sandell-Berg’s first collection of poems, Andeliga vårblommor, was anonymously published in 1853. These poems, similar to the poems she had written as a child, included several about seeking refuge from life’s difficulties in the eternal God. Another collection was published in 1856 entitled Andeliga daggdroppar. After that Lina Sandell-Berg suffered a period of personal tragedies. Her father drowned in the summer of 1858. He fell overboard when the steamboat he was aboard keeled over on Vättern. The following spring her eldest sister Charlotta died of tuberculosis, leaving three children behind, the youngest only a newborn. The next year Lina lost her mother, Fredrica.

Both Lina Sandell-Berg and her father believed in the principle that all losses should be received as freely given gifts and reminders of God’s constancy. “Let me never seek any other support than yours”, Lina Sandell-Berg wrote in her diary in May 1860. “All other supports are unreliable and they fail when you want to rely on them. But You are steadfast.” She was strictly self-disciplined but was not always consistent. She complained, throughout her life, in letters and in her diaries, about physical weakness and futility, and she wrote poems about her longing to leave this life. Despite this, she undertook long journeys abroad and within Sweden and engaged in laborious work as an editor, translator and author.

By the time Lina Sandell-Berg’s parents had died she was already well-known as a religious poet – partly due to her collaboration with the composer and singer Oskar Ahnfelt. Indeed, a special post was created for her at Evangeliska Fosterlands-Stiftelsen (EFS, the Swedish Evangelical Mission) in Stockholm. She rented a room in the city where she worked when she was not at the mission office. She continued composing after marrying Carl Oscar Berg, a wholesale merchant and temperance-activist, in 1876. She had held off from accepting his proposal for a long time, seeking to remain “one of the ‘Lord’s free people’ – a little bird chirping about Jesus out here in the woods”, as she wrote to a friend. Once married she elatedly testified to how well her husband managed their home and the “genuine maternal care” he had applied to make it pleasant for her.

Yet another hard blow befell Lina Sandell-Berg when she gave birth to a stillborn daughter in 1868. Her friend and biographer Sigrid Storkenfeldt omits this event from her book about Lina Sandell-Berg. Even Oscar Lövgren did not uncover this deep secret when working on his comprehensive biography of Lina Sandell-Berg. The secret was maintained by excising portions of her letters from that time.

Despite remaining childless herself Lina Sandell-Berg came to have an influence on many children. She raised several nieces and nephews in her own home and she informed the Christian and ethical mindsets of generations of other children, particularly those who attended Sunday school. She published several works, biographies and missionary-tales through Evangeliska Fosterlands-Stiftelsen. From 1866–1902 she edited Korsblomman, Christlig kalender, the children’s publication Korn åt små fåglar, and until 1891 Barnens tidning. She published the weekly Barnens Vän for twelve years. As a writer and an editor she tended to use her maiden-name, Sandell, as she also did for Samlade sånger, published during the years 1882–1892. In all other situations she used the name Lina Berg.

Lina Sandell-Berg reacted very personally when some of her hymns were edited and altered. These changes were made to counter the feminine language she used in the descriptions of God and Jesus. As a child Lina Sandell-Berg had responded to God’s and Jesus’ motherly qualities and she had expressed this in her teen-age poems. This imagery originates from the Herrnhuts, pious 18th-century Christians who championed education for girls and even allowed women to preach. The established clergy of the time found the language controversial and on re-publishing Lina Sandell-Berg’s hymn “Blott en dag, ett ögonblick i sänder” – which originally dealt with the Lord’s motherly love – it was re-written to describe the Father and his fatherly love.

One of Lina Sandell-Berg’s 1863 hymns describes how Jesus wants to be everything, “Father, Mother, home and the future”, just as the feminist-theologians of the 1900s did. However, when the hymn was included in Sionstoner, the Evangeliska Fosterlands-Stiftelsen 1889 hymnbook, that stanza was omitted. Even in 1972 the Swedish church hymnbook replaced the words “hugsvalande såsom en moder” (comforting like a mother) in one of Lina Sandell-Berg’s hymns with “hugsvalande i deras hjärtan” (comforting in their hearts). The mother-hen image had been changed to fatherly love, and her protective wing was altered to a father’s hand.

The 1937 edition of the hymnbook was the first to include any popular and pietist-influenced material. It included eleven of Lina Sandell-Berg’s songs, some of which are still among the most used and well-known hymns in Sweden, such as “Tryggare kan ingen vara”, “Blott en dag, ett ögonblick i sänder” and “Bred dina vida vingar, O Jesu, över mig” (found in the most recent hymnbook at numbers 248, 249 and 190 respectively). In Den Svenska Psalmboken adopted by the 1986 church-synod Lina Sandell-Berg is the sole 19th-century female hymn-composer to appear, represented by fourteen of her hymns. Only one other woman has more hymns included, namely the 20th-century composer Britt G. Hallqvist, with fifteen of her own hymns and a large number of re-workings of other hymns incorporated in the hymnbook. There is a striking similarity between the poetry of Lina Sandell-Berg and Britt G. Hallqvist. They both use simple language and write about the everyday experience of loneliness, longing for comfort and gratitude. For example, Sandell-Berg: “Jag kan icke räkna dem alla,/de prov på Guds godhet jag rönt” (I cannot count them all / the proof of God’s goodness that I have observed) (number 260), and Hallqvist: “Han gör mig glad/när jag är rädd,/ när jag har gjort mig illa” (He makes me happy when I am afraid/ when I have hurt myself) (number 255).

Den Svenska Psalmboken is, and has been, the nation’s most widely disseminated collection of poetry and through it Lina Sandell-Berg has reached a vast amount of readers. Through Pilgrimsharpan, the Evangeliska Fosterlands-Stiftelsen songbook which was published in 1861 and was renamed Sionstoner in 1889, even more of Lina Sandell-Berg’s hymns became available to a large audience. Fifty out of the 225 songs were her compositions. It has been printed in many editions, and even in the 1972 edition 75 out of 700 songs were Lina Sandell-Berg’s own songs or those she had re-worked.

Lina Sandell-Berg died in 1903 and is buried at Solna cemetery. Around a thousand people gathered for her funeral. Her tombstone is inscribed with a line from one of her most famous hymns, “Tryggare kan ingen vara” (No-one could be safer). 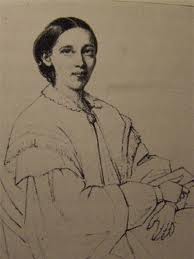