Lisa Thomasson, who was known as “Lapp-Lisa” or “Näktergalen från Oviken” (the Oviken Nightingale), was a ballad singer of Sami heritage whose repertoire included spiritual and nondenominational songs.

Lisa Thomasson was born in 1878. She grew up in Oviksfjällen. She was the daughter of a settled Sami couple named Thomas and Brita Maria Andersson, who lived in Myssjö, Jämtland. Her father went on lecture tours informing Swedes on the Sami culture and lifestyle. Lisa Thomasson would sometimes accompany her father and at one such talk in Gävle she performed some songs. Fredrik Hedström, a cantor, recognised her musical talent and gave her both singing and musical instruction. He arranged several concert tours during the period of 1896–1902 during which he would provide the accompaniment on piano or organ when Lisa Thomasson wasn’t playing the zither or guitar herself. Her repertoire included spiritual songs and ballads, as well as songs associated with the Sami lifestyle and the magnificent nature of her childhood district. She sang traditional ‘läsarsånger’ (spiritual songs) and the Psalms of David set to music. Her trademark tune was Lappflickans visa which she sang at every performance.

Lisa Thomasson became famous as “Lapp-Lisa”. Her brother, Nils Thomasson, was a photographer who made photographic portraits of his sister which were subsequently sold at concert tours and meetings. Lisa Thomasson would perform in churches, chapels, and missionary centres across the country although she brought her touring to an end around 1902. In 1911 she married Bror Johansson, who changed his surname to Bosiö and later entered the priesthood.

Just over 20 years after Lisa Thomasson had stopped touring another “Lapp-Lisa” became famous. This was Anna-Lisa Öst who from 1924 onwards, right up until her death in 1974, was known as “Lapp-Lisa” to the Swedish population. This was a professional artist’s name which had been suggested to her by others because she tended to perform in traditional costume even though she herself was not of Sami heritage. Anna-Lisa Öst never made a secret of the fact that she was the second “Lapp-Lisa” and she often sang songs from Lisa Thomasson’s repertoire, including the latter’s trademark song Lappflickans visa.

Lisa Thomasson died in Furudal in Dalarna in 1932. 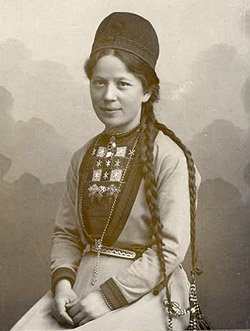