Lizzy Lind af Hageby was an activist renowned for her fighting spirit, who worked internationally for the animal rights, women’s and peace movements at the beginning of the 1900s.

When she was in her teens, Lizzy Lind af Hageby attended Cheltenham Ladies’ College at Cheltenham in the English county of Gloucestershire. Back in Stockholm, she became involved among other things in the movements against child labour, against the regulation of prostitution, and for prison reform. With her friend and colleague Leisa Schartau, she also shared the post of secretary in the Nordic Association for the prevention of cruelty to animals in scientific research (Nordiska Samfundet till bekämpande af det vetenskapliga djurplågeriet) nowadays Djurens Rätt.

In the socialist and theosophical magazine Lucifer ljusbringaren, articles by Lizzy Lind af Hageby can be found along with articles by Kata Dalström, Hjalmar Branting and Hinke Bergegren. The magazine’s motto was completely in tune with Lizzy Lind af Hageby’s views, and perhaps she even had a hand in formulating it: “Knowledge that promotes freedom for the people and social happiness for all. Knowledge about humanitarian movements and their leaders. Knowledge about Nordic workers’ organisations and their men and women. Knowledge about justice and kindness to people and animals.”

In the feminist discussion, Lizzy Lind af Hageby and Frida Stéenhoff polemicised on the issue of birth control. The former asserted that birth control was best attained through social reforms and education. Contemporary ideas about human degeneration and biological refinement, so-called eugenics, she considered erroneous. The only alternative was the voluntary treatment of mental illnesses and the dissolution of the prevailing sex roles, what she termed “spiritual bisexuality”.

There was a hospital without animal experimentation at Battersea in South London, the National Anti-Vivisection Hospital, where Lizzy Lind af Hageby occupied a place on the board. The hospital offered alternative treatments and free healthcare to workers, destitutes and women who otherwise risked being subjected to medical experimentation.

After a year in England, Lizzy Lind af Hageby and Leisa Schartau published Eye-Witnesses in 1903, later entitled Shambles of Science, with eyewitness accounts from the exclusively male experimental physiology lessons at King’s College and University College London, to which the authors had received dispensation. This book, which may be seen as an early example of investigative journalism, revealed cruelty to animals through inadequate anaesthesia. It became the subject of much discussion and led to a trial at which Lizzy Lind af Hageby was a witness. The book appeared in Swedish in 1905 with the title Dagboksanteckningar från de fysiologiska laboratorierna.

Lizzy Lind af Hageby played a leading role in creating the mass movements of her day for animal rights and animal protection. She participated in public debates with physiologists and doctors, held hundreds of lectures in Great Britain, the rest of Europe and the USA, and arranged exhibitions, congresses, debates and demonstrations. Her Cicero-inspired eloquence in particular, with its well-balanced gestures, impressed both her allies and her critics. For the Women’s Freedom League, the Humanitarian League, and later the International Committee of Women for Permanent Peace, she lectured on how women’s rights and animal rights should be included in the social development of humanity.

Together with Leisa Schartau, Lizzy Lind af Hageby founded the organisation Animal Defence and Anti-Vivisection Society and the magazine The Anti-Vivisection Review for which she became the editor. Other members of the association’s board were among others the suffragettes Gertrude Mary Ansell and Nora Logan. Her friend, the poet Mary Karadja, was a board member as well, who with Lizzy Lind af Hageby and Anna Synnerdahl published the spiritualist magazine XX:e seklet in 1902—1904.

Her most cherished issue, the criticism of animal experimentation, was taken by Lizzy Lind af Hageby from a philosophy she called neo-vitalism: the body was both physical and spiritual and illnesses had psychological, social and spiritual dimensions. They arose often out of the social divisions in society. Her thinking was ethically and epistemologically grounded on the principle that the end does not justify the means; knowledge and research that exploit a weak group, whether human or animal, do not lead to sustainable progress. Medical research and the curative arts ought to promote justice and be constructive rather than being experimental and only treating symptoms.

In yet another legal dispute, concerning defamation by the animal experimentation and eugenics advocate Dr Caleb Saleeby, Lizzy Lind af Hageby pleaded her own case with the record length of 32 hours, including 20,000 questions, even though women were not permitted to join the legal profession.”

The British press followed the court battle and referred to Lizzy Lind af Hageby, who had been a British citizen since 1912, as a “Modern Portia” and “The New Woman in Excelsis”. They called her achievement a convincing contribution to the struggle for women’s suffrage. The Nation wrote on 26 April 1913: “The long trial displayed the most brilliant piece of legal work that the British legal system has seen since Russell’s days, despite its having been done by a woman. It seems as though women can vanquish courts and judges, even though they are not permitted to stand for the country’s parliament.” Next to the articles, Lizzy Lind af Hageby can be seen portrayed in a comfortable full-length costume without stays, and with a velvet cloak and a hat with feathers made out of lace, all personally inspired by the principles of the clothing reform movement.

The same year, in 1913, she published the biography August Strindberg, the Spirit of Revolt, in which she defended the author as a “subjective natural power undergoing constant transformation” and a “lightning-conductor for contemporary mental currents”. She gives prominence to Strindberg’s musical language and the novels The Red Room and The People of Hemsö as well as his dramas, but criticises Strindberg’s views on women.

This book, the first biography in English on Strindberg, firmly established Strindberg’s authorship, criticised in England up until then, and it was reviewed in the English language press all over the world. In Sweden, the work was reviewed by John Landquist, Gustaf Uddgren and Elin Wägner respectively. Elin Wägner considered the biography to be a “revenge against the great accuser, a revenge in the same style as women’s best traditions”.

The Strindberg biography led to Lizzy Lind af Hageby’s becoming in great demand as a columnist and also to her earlier subjects of discussion — animal rights, feminism, vegetarianism, mental illnesses, theosophy and spiritualism, literature and the theatre — being broadened by special lectures on Strindberg, later published in book form as August Strindberg, a Study in 1927.

Among Lizzy Lind af Hageby’s other titles may be noted Lefvande språkundervisning in 1905, on François Gouins’ methods, and Mountain Meditations: And Some Subjects of the Day and the War in 1917 in which she uses essay form to advocate a theosophical attitude to contemporary existential and political issues.

During the first world war, Lizzy Lind af Hageby started the rescue service Purple Cross Service that built three veterinary hospitals for wounded horses in the field, a hospital for wounded French and Serbian soldiers and a sanatorium for children from war-torn families in Beausoleil on the French Riviera.

In Geneva, she founded the International Humanitarian Bureau in 1928 with the aim of using education and diplomacy to induce the League of Nations to include animal issues in their peace work. The emblem of the Bureau featured the colours of the rainbow – the contemporary symbol for peace and diversity – with the words “Many Colours, One Light”. Her efforts were rewarded in 1935 with distinctions from the foreign ministry and the ministry of agriculture in France.

Advice from her family in Sweden to start a traditional family of her own was rejected. Her relationship with her older brother, a military man later to be made a colonel, was strained and it deteriorated even further when her brother sided with Nazi Germany during the second world war. In their young days, Lizzy Lind af Hageby shared a home with Leisa Schartau, and later also with Nina Douglas-Hamilton, Nora Logan, Berthe Delius and Mary Estelle Mordan — all of whom were involved in women’s issues, animal rights and the peace movement.

Her leisure activities included dogs, motorcars and hiking in the Alps, especially the French and Swiss Alps where she spent a good deal of her time. In cooperation with Nina Douglas-Hamilton, Lizzy Lind af Hageby ran the combined animal sanctuary and crèche Ferne House at Shaftesbury in the English county of Dorset. During the second world war, Ferne House functioned as an evacuation centre for those needing one.

Lizzy Lind af Hageby died at home in her beloved London on 26 December 1963. During her career, she had sought discussion and dialogue, and also gathered much support from sympathisers, not least financially. The considerable inheritance in her will was divided between the women co-activists who constituted her faithful family, with the aim of enabling them to continue the work for vulnerable animals. 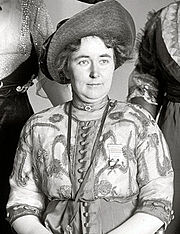