Lotten von Plomgren was a central figure of Svenska kvinnoföreningen för fosterlandets försvar (Swedish civil defence women’s association), which was one of the biggest women’s organisations of around the turn of the twentieth century.

Lotten von Plomgren was born in 1831 when her father, Count Gustaf Fredrik Liljencrantz, was the second-in-command of Livgardet till häst (mounted Life Guards) cavalry troop. She was the second child in a family which came to number five children. Her sister Jaquette Liljencrantz, the youngest of all, would later run away to escape the harsh dominance exerted by her brothers. Lotten von Plomgren spent her childhood in Stockholm, for a time living at the Crown Prince’s palace following her father’s appointment in the 1840s as ‘hovmarskalk’ (marshal of court, or lord chamberlain) to King Oscar I. When Lotten von Plomgren was 25 years old she married an officer named Erland von Plomgren, who was later promoted colonel. They had eight children together, born in rapid succession between 1857 and 1870.

In the spring of 1884 Lotten von Plomgren attended a meeting of women who were pro-armament and this meeting led to the establishment of Svenska kvinnoföreningen för fosterlandets försvar. The aim of the organisation was to support the military defence of the nation and to fundraise large sums for military use, which included fortifying Karlsborg fortress. Lotten von Plomgren served as the organisation’s chair for a period of 30 years, from its establishment in 1884 until 1914. During this time the association expanded into one of the largest women’s organisations in Sweden. Lotten von Plomgren is said to have worked passionately and successfully on behalf of the association and in developing it. She was awarded the Illis quorum medal, as well as others, in recognition of her efforts.

Lotten von Plomgren resigned from the board of Svenska kvinnoföreningen för fosterlandets försvar in 1914 and was succeeded by Anna Rappe as chair. The reason for her resignation was noted as age and worsening health. Lotten von Plomgren died in 1916, aged 84. 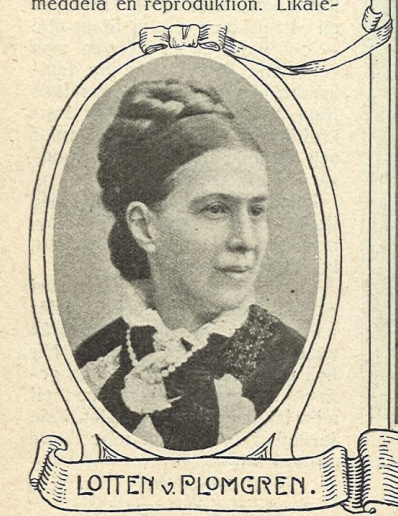