Louise Flodin was a typographer, a journalist, and a newspaper proprietor. She was also the first Swedish woman who was given official permission to publish a newspaper.

Louise Flodin was born in 1828 and grew up in a home where studying was the norm. Her mother, Charlotta Söderquist, who was a clergyman’s daughter and the widow of two further clergymen, left the vicarage in 1830 and moved to Örebro with her two children. In 1845 she opened a private school in her home at which Louise Flodin also taught. One of the students was Sofia Gumaelius who would later establish one of the first advertising agencies in Stockholm and be one of the first women to join the Publicists club, along with Louise Flodin. During the 1848-1856 period Louise Flodin worked as a governess for the Lagergren family at Hammar farm in Asker, but after gaining her inheritance she decided to realise her childhood dreams which had been inspired by frequent visits to Nerikes Allehanda’s type-setting room. She was closely related to the aforementioned Gumaelius family which ran the paper. In 1856 she began to train as a typographer, which at that time was an unusual occupation for a woman. She took to it so quickly that in less than year she became the manager of a printing house in Borås.

In 1858 she bought a printing house in Arboga and was the first Swedish woman to be given official permission to print a weekly news sheet, Arboga Tidning. No men wanted to work under a female editor and initially she generated the entire news sheet herself. She collected news and advertising, cut material out of other papers, typeset the pieces, proofread, and printed the news sheet. Soon she began to employ her own female colleagues by training girls from poor families at her printing shop, including five clergymen’s daughters, who were also allowed to live in her home. The readers’ column and the section called ‘Brevlådan’ (the letterbox) in the news sheet treated matters that would have been deemed controversial at that time. She voiced criticism, using various pseudonyms, against how women were trapped by their corsets and crinoline, but she also printed news about women who had achieved something. Her news sheet was not specifically a ‘woman’s paper’ but soon there was talk that an “anti-social spirit with [Louise Flodin] had entered the town” and opposition to her, both as a woman and an editor, increased significantly.

In 1862 Louise Flodin sold her news sheet and printing house to her brother and moved to Stockholm, where she set up a new printing shop. Over time she trained about 80 women to become typographers. She encouraged them to set up a club in support of eachother. The onset of an eye disease in 1875 forced her to sell her printing house. At this point she had been married to the publisher Sigfrid Flodin for 10 years and together they continued to run his business. Their home also served as a meeting place and salon for contemporary literary and publicist circles. Sigfrid Flodin was chair of Svenska bokförläggareföreningen (Swedish book publishers’ association) from 1887-1890. Louise Flodin had finally won a victory not long before this: in 1885 women were allowed into the Publicist club. She was one of the first women to become a member, along with Sophie Adlersparre, Anne Charlotte Leffler, Alfhild Agrell, Anna Branting, Emilie Flygare-Carlén, and Sofia Gumaelius.

Despite her eye problems Louise Flodin continued to work on several papers, including Tidning för trädgårdsodlare, from 1889-1901. After her husband’s death in 1909 she kept running their publishing house until 1913, but at that point – when she was 85 years old – she handed it over to Albert Bonnier.

Louise Flodin died in Stockholm in 1923. 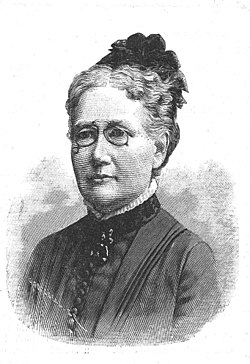