Louise Adelborg was an important designer and textile artist who was active from the 1910s until the end of the 1950s. These days she is perhaps best known for designing the porcelain range called Swedish Grace.

Louise Adelborg was born in 1885. She and her two brothers grew up at Östermalma farm, near Nyköping. She was the daughter of Captain Otto E. Adelborg and Baroness Jacquette De Geer. She was related to the three Adelborg sisters Gertrud Adelborg, a suffragette, and Ottilia Adelborg and Maria Adelborg, who were both artists. Louise Adelborg herself began to paint watercolours and create patterns as a child.

Louise Adelborg trained as a drawing instructor, who specialised in pattern designing, at Tekniska skolan (now Konstfack, school of arts, crafts and design) in Stockholm. She was a student at the school during the 1903–1906 period, and again during the 1906–1909 period. She then undertook study tours to Great Britain, Italy, and France. She returned to Stockholm in 1911, settling initially at Västra Trädgårdsgatan and then, in 1915, moving to Fredrikshovsgatan, where she opened a studio. In 1922 she moved to Grev Turegatan, where she lived for the rest of her life.

Louise Adelborg held her debut exhibition at Galleri Gummeson in Stockholm, displaying ceramic and embroidered works as well as some lamps she had designed. In 1917 she was hired as a designer by Rörstrands Porslinsfabrik (porcelain factory), initially on a freelance basis and then as an employee from 1926–1957. She remained connected to the factory for the rest of her life.

One of Louise Adelborg’s creations for Rörstrands Porslinsfabrik was a 1923 vase, called simply Vase, decorated with a pattern of ears of wheat, inspired by the Vasa heraldic sheaf. Vase was displayed at the 1925 Paris Exhibition and Louise Adelborg used the ear of wheat motif again later in a table service initially called Nationalservisen, or NS. It displayed a stylised relief portrayal of an ear of wheat. It was first viewed by the public at the 1930 Stockholm Exhibition. This table service remained in production for a long time and was re-launched in 2001, renamed Swedish Grace, and remains in production. Louise Adelborg also designed some patterns which were used by Lidköpings Porslinsfabrik.

Louise Adelborg was also an accomplished textile artist, and embroidery was another of her major interests. For example, she designed a number of textiles with religious motifs, including an antependium for Riddarholmen church in Stockholm. Further she also designed textile patterns for Almedahl-Dalsjöfors AB.

Louise Adelborg spent her summers on the west coast in Ulvesund, from the time she was 25 until she was 85 years old. There she had a spartan house which also served as a studio. She used a motorised rowboat to travel around the area. Her neighbours described her as charming, beautiful, and friendly. She was tall and thin and wore large hats and long skirts. She was religious, had an interest in mysticism and existential questions, and she was a member of Edelweissförbundet, along with Hilma af Klint.

Louise Adelborg was particularly interested in flowers. She helped make people aware of countryside flowers by painting them onto trays, on printed textiles, and on postcards. She herself said: “porcelain was for a wider audience, whilst embroidery was for my soul”.

Examples of Louise Adelborg’s work can be seen at Nationalmuseum and Röhsska museet in Gothenburg.

Louise Adelborg lived to be 86 years old and died in 1971. She is buried at Norra Begravningsplatsen (the Northern cemetery) in Solna. 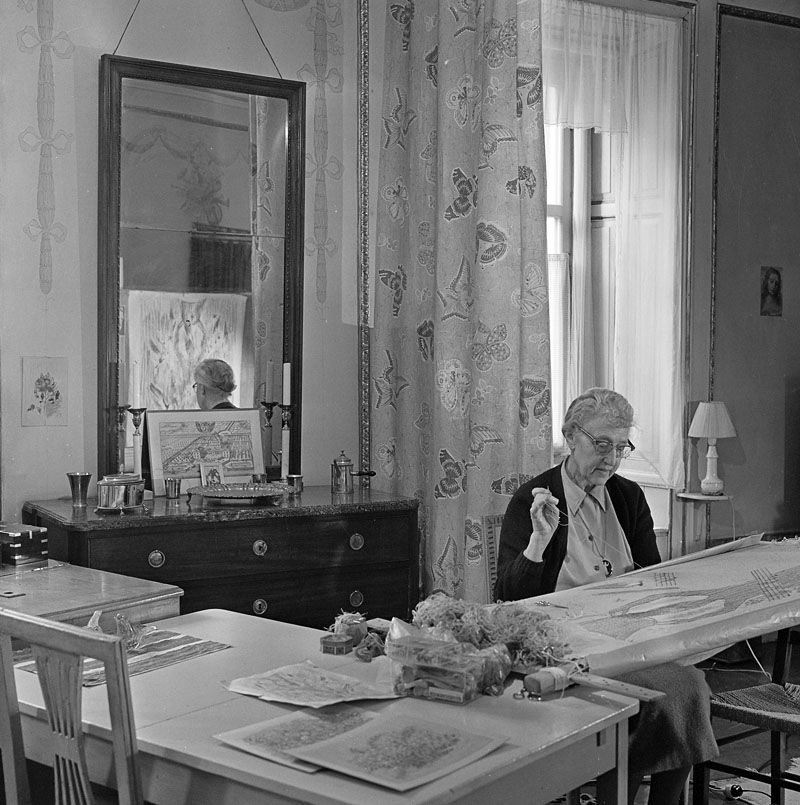