Louise Petrén-Overton was the first woman to gain a doctorate in mathematics in Sweden.

Louise Petrén-Overton was the daughter of Edvard Petrén, a pastor in Halmstad, and his wife Charlotte Göransson. She was the youngest of 12 children, nine of whom were boys. In contrast to her 15- and respectively 20-years elder sisters she was free from household chores and was able to focus on her education. Each of her brothers entered higher education and several of them – including Edvard, Alfred, and Karl – went on to hold leading positions within wider society. Edvard became a justice of the Supreme Court whilst Karl became a professor and medical researcher.

Louise Petrén-Overton gained her school-leaving certificate as a private student at Katedralskolan in Lund in 1899. Following the awarding of her Bachelor’s degree in 1910 she then became the first woman to gain her doctorate in mathematics, having written a dissertation entitled Extension de la méthode de Laplace aux équations, published in 1912. That same year she married Ernest Overton, the first professor of pharmacology at Lund, who as it happens was related to Darwin. They had four children together, and their son Maxwell became a well-known figure in Lund as a perpetual student. He was a geographer and undertook research but he never completed his doctorate.

Louise Petrén-Overton could not seek employment at Lund university as at that time women did not have the right to access such posts. Instead she taught hourly lessons at the local girls’ schools and from 1912 onwards was employed by the life-insurance company Thule's actuarial department.

Louise Petrén-Overton died in 1977. She is buried at the Östra cemetery in Lund. 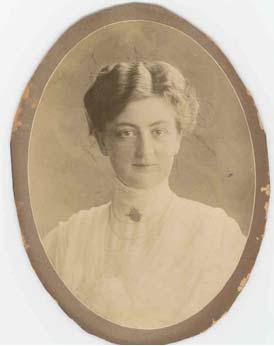