Louise Woods-Beckman was an active member of the temperance movement. She also wrote about contemporary social issues. Further, she was involved in setting up the Myrorna association, a group which sells second-hand goods.

Louise Woods-Beckman was born in Princeton, New Jersey in the USA. She was born on 21 August 1852. Her father was David Woods Baker, a chemist, and her mother was called Sarah Schoonmaker Tuthill. She grew up in a home in which abstinence from alcohol was taken for granted.

On 19 July 1876 Louise Woods-Beckman married Ernst Beckman at Trinity Church in Princeton. Ernst Beckman had come to the USA in order to study and it was not long before the couple moved to Stockholm. Ernst was the son of Anders Fredrik Beckman, bishop of Skara diocese, and he was both a parliamentarian as well as editor of the Aftonbladet newspaper. The couple’s first child was born in 1878, and another seven children followed during the next thirteen years. One of these children, Anders, died in 1887 aged only eight. During her first years in in Sweden Louise Woods-Beckman was fully occupied with caring for her family and running the household. In 1891 the family moved to the newly established garden-city of Djursholm. There Louise Woods-Beckman ensured that regular religious services were held. The family’s social circle included the likes of Erik Axel Karlfeldt.

Louise Woods-Beckman joined Blå Bandet (blue ribbon) at an early stage and when Vita Bandet (white ribbon) first came to Sweden in 1890 she joined it as well and served as its chair. A couple of years later, however, the enterprise was disbanded, only to be reassembled in 1897. At that time Louise Woods-Beckman once again served as chair but in 1903 she was forced to resign her position due to illness. By then she had been involved in setting up many local associations and committees on behalf of Vita Bandet. She also gave a lot of lectures. For example on 5 December 1902 she gave a talk in Norrland about the change in public opinion regarding sobriety. Along with her fellow board members she travelled around and helped set up 13 new associations, which by 1903 numbered 520 members.

Further to her efforts with Vita Bandet Louise Woods-Beckman was mostly busy running her household. She brought her children up to view abstinence from alcohol as the norm and ensured that it was never served to any visitors they had. Louise Woods-Beckman also took an active interest in other humanitarian concerns of the time, such as universal suffrage and child-rearing. The latter is represented in a small pamphlet she published in 1901 entitled Hemlifvet med barnen. She also expressed her views on home help in an article called “I tjänst – Strödda tankar i tjänarinnefrågan” which was published in 1904 in Social tidskrift: organ för studenter och arbetare.

Louise Woods-Beckman was also one of the founding women behind Myrorna, an organisation which collects and sells second-hand items for charity. She was also heavily opposed to the registration and enforced medical examination of prostitutes. In 1902 she was elected chair of the so-called 5th February committee which collected the signatures of over 15,000 women who opposed legal prostitution. In 1905 she was elected onto the board of Föreningen för dövstumma blinda (association for the deaf, mute, and blind), an association which at the time numbered over 150 members.

In 1918 Louise Woods-Beckman and her husband moved to Santa Barbara in California. Her husband died there in 1924. To mark her 80th birthday Louise Woods-Beckman was honoured by having her portrait published on the cover of Tidevarvet journal. Four years later she died. She is buried in the family tomb at Djursholms Begravningsplats (cemetery). 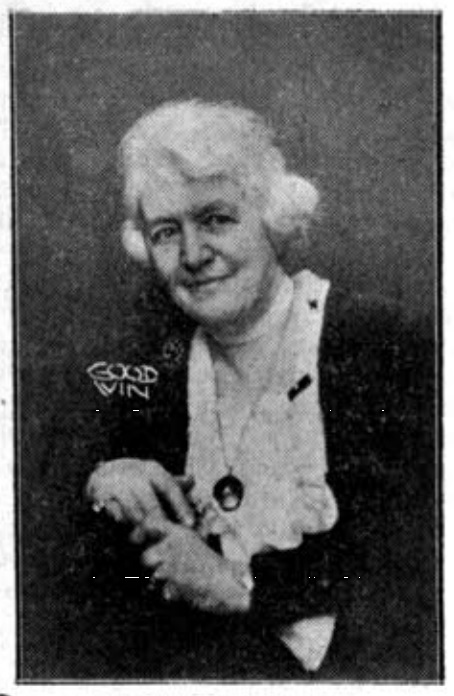