Louise von Bahr grew up on Hjortsberga farm near the northern shore of Lake Julan in Södermanland. Her mother, Charlotta Boström, died when she was eight years old. Her father, Otto von Bahr, was a captain in the road and waterways construction service corps as well as a landlord and director of Skandia. His second marriage was to Alfhild Bergman, with whom Louise von Bahr had a good and close relationship throughout her life.

Having graduated from the Lyceum for girls in Stockholm Louise von Bahr enrolled in a physical education instructor training programme at Gymnastiska centralinstitutet (GCI) in Stockholm in 1891. She completed her studies there in 1893 and then worked as a physical education instructor at the Hallska school and at various elementary schools in Gothenburg between 1894 and 1897. She also led the exercises for Gymnastiksällskapet Sköldmön, Sweden’s first gymnastics association for women. From 1898 until 1930 she worked at the Djursholm co-educational school north of Stockholm. For one and a half decades after completing her studies, she spent the summer months working at various spas and health resorts as a physiotherapist, as was common for female physical education instructors working at schools. Louise von Bahr worked in Karlshamn, Trulsboda and Ramlösa. Alongside her teaching activities she and her colleague Anna Lundberg also ran a private physiotherapy institute from 1905 to 1913.

With Louise von Bahr as a driving force, the physical education instructors who became qualified at GCI in 1893 maintained correspondence for 50 years in the form of itinerant notebooks. These books, comprising nearly 500 letters, were circulated amongst the former classmates between 1893 and 1943, apart from the period of 1914-1922 when the book vanished in France during the First World War. The letters make up five volumes and are kept at the library of Gymnastik- och idrottshögskolan. They provide a unique insight into the professional and everyday lives of highly educated Swedish women at that time. They also contain hundreds of photographs, mainly family photos.

Louise von Bahr was also deputy chair of Kvinnliga Gymnastikföreningen Sverige (National Women’s Gymnastics Association of Sweden). Anna Lundberg was the association’s secretary and treasurer and together the two women formed the driving force of the association, which enabled female participation in gymnastics at the 1912 Olympic Games in Stockholm. In what was otherwise a strictly masculine environment, women were in charge of and organised the female gymnastics display. Louise von Bahr was also one of the women who reinforced the sports medal committee of Sveriges Riksidrottsförbundet (the Swedish Sports Confederation) when a female sports medal was established in 1913. Louise von Bahr was a member of the first board of Förbundet För Fysisk Fostran (today Svenska Frisksportförbundet) in 1913 and she was the sole female member of the committee to re-organise the GCI in 1927.

Louise von Bahr was politically of the liberal persuasion. Most of her social activism beyond physical education occurred within the peace and disarmament movements. She was active in Förbundet för kristet samhällsliv (Association for a Christian Society) and Vännernas samfund i Sverige (Friends Society Sweden, the Quakers). Her correspondence with her former classmates reveals her condemnation of both “F-båtsinsamlingen” (fundraising for a Swedish battleship) as well as Sven Hedin’s pamphlet in favour of a stronger military, whilst also showing that she campaigned for men’s conscientious objection to military service. She also signed the International Women’s Association for Peace and Freedom’s appeal in 1915.

Louise von Bahr died in 1942 and is buried at Vårdinge cemetery. 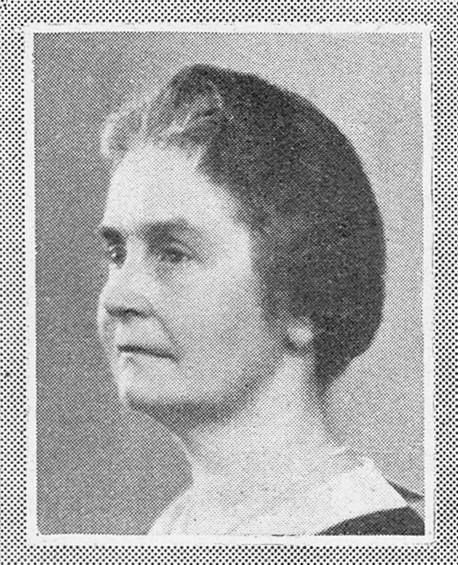