Lillie Landgren was a master gardener, a director of Torshälls trädgårdsskola (horticultural school), and an author. She was of great significance to horticulture and views on vegetarian fare.

Lillie Landgren was born in Leksands Noret in 1876. She was one of five daughters born to Strickert Landgren, a provincial doctor, and his wife Hanna (née Engblom). Strickert Landgren retired in 1896 following which the family moved to Stockholm and Lillie Landgren graduated from school there in 1898. She and all her sisters were well-educated. Lillie Landgren travelled to England to attend Swanley Horticultural College in Kent. She then spent some time working as a gardener in England and subsequently furthered her gardening skills in Sweden by attending courses at the Agdatorps and Adelsnäs horticultural schools. She thereby gained thorough training in the art of gardening. Additionally, thanks to a stipend received from Fredrika-Bremer-Förbundet (association) in 1902, she was able to travel throughout Sweden and Denmark in order to study school- and community-gardens. Subsequently, in both 1907 and 1908, she received government stipends to fund her “studies of local gardening practises at schools in Sweden, Finland, and Denmark”.

From 1905 until 1945 Lillie Landgren ran the Torshäll horticultural school in the Leksand village of Tibble. The school, which she single-handedly established, invited “men and women in general” to attend as students of “shorter courses in practical gardening”. These courses were organised by the Kopparberg county Hushållningssällskap (agricultural society) and they were advertised in the Lantbrukstidskrift för Dalarna journal. Lillie Landgren also ran longer courses for female students from all over Sweden and, from around 1920 onwards, she also took in boarders who had an interest in vegetarianism. Torshäll school had sowing benches, greenhouses, flowerbeds, vegetable cultivation including asparagus and mushrooms, as well as a number of fruit trees and an aromatic herb garden. Lillie Landgren, who had been vegetarian since 1901, also ran courses in how to preserve food and in vegetarian food preparation.

From 1908 until the end of 1924 Lillie Landgren enjoyed the companionship of Märta Philip at Torshäll, who was also involved in teaching and similarly bore the title of director. Neither Lillie Landgren nor Märta Philip ever married but they each adopted a daughter in 1919. These girls came from poor backgrounds in Stockholm. Märta’s sister, Signe Philip, ran a domestic sciences school in Leksand together with Gertrud Walin, the sister of Ingeborg Walin. Signe Philip also adopted a girl in 1919. For a few years during the 1920s Elin Sundberg, from Kyrkesund, Tjörn, lived intermittently at Torshäll, forming part of the household there during the winter months. Elin Sundberg was also an active member of the Vita Bandet (White Ribbon) association in Gothenburg and she facilitated the connections between Lillie Landgren and the association. Later on Lillie Landgren sent the association juice and jams to be sold at their bazaars. Lillie Landgren, Signe Philip, Gertrud Walin, and Elin Sundberg all belonged to the Frisinnade Landsföreningen (Free-minded National Association) women’s group. Given that they were all entrepreneurial women in the early 1900s they all supported the struggle for women’s emancipation and suffrage.

The Torshäll horticultural school won prizes for its fruit, vegetables and preserved foods at several gardening competitions, including those held at Falun, Borlänge, and Stockholm. The school won 1st prize for “excellent dried fruits, berries and vegetables” at the 1912 Kungliga lantbruksakademien (royal agricultural academy) exhibition in Stockholm. The school also won 1st prize for “fruit from trees and berries” at the Dalarna trädgårdsodlareförbund (garden growers’ association) exhibition in Falun in 1913. The school also gained “honourable mention for peas” at the fifth Nordiska Trädgårdsutställningen (Scandinavian garden exhibition) held in Gothenburg in 1923. In addition, Lillie Landgren and Märta Philip were awarded diplomas for “designs for garden buildings for smaller homes” at the Dalarna trädgårdsodlareförbund exhibition in Falun in 1913. In 1914 they then published a collection of plates entitled “Anläggning av vår trädgård” which included 10 plates and a guide with drawings offering suggestions of how to present various types of gardens. This collection of plates was used as teaching material at the horticultural school.

The Torshäll school was primarily run as a gardening school but Lillie Landgren also lent a hand with building projects and coppicing fruit trees, amongst other things, in other people’s gardens. She also created funeral wreaths and bouquets to order. The school itself sold fruit trees, berry bushes, vegetables, and flowers. Students helped with the sales either at the school or at Noret, where fruit and vegetables would be transported in carts to be sold from a market stall. The 1935 book Trädgårdsodlingen i Sverige lists prominent fruit growers by county and Torshäll horticultural school in Leksand is listed under Kopparberg county with 150 trees. The Torshäll enterprise is presented in the book Svenska trädgårdar from 1940: at that time the garden extended to three hectares and comprised a greenhouse, along with twenty sowing bench windows to allow for cultivation under glass. There was extensive cultivation of fruit, berries, and vegetables. “The products are sold door to door”, as it says in the text, but the vegetables were also used to feed the students at the school which served lacto-vegetarian food to everyone. Lillie Landgren was a member of Sveriges Handelsträdgårdsmästarförbund (SHTF) (commercial gardeners’ association), as well as of the Dalarnas trädgårdsodlareförbund, and Pomologiska Föreningen (association).

Lillie Landgren wrote a book entitled Vår Trädgård, which was released in three editions in 1910, 1916, and 1926 to great success. It was intended to serve as teaching material at the horticultural school but the book was also directed towards the wider public as Lillie Landgren wanted to disseminate her ideas on gardening. She also penned several articles on gardening, such as: “Gif ditt hem en trädgård, du som kan det!” for Lantbrukstidskrift för Dalarna in 1924. Further, Lillie Landgren gave talks on horticulture and how to plan a garden. Gardening was not just a profession to her but also somewhat of a calling and she encouraged everyone to undertake cultivation.

On the occasion of Lillie Landgren’s 50th birthday in 1926 the Kopparberg county rural society published a tribute to her in the August edition of Lantbrukstidskrift för Dalarna. This journal emphasised that a major change had occurred in the county within the sphere of gardening. Lillie Landgren, amongst others, was to be thanked for this given the wide audience she had reached through her courses, talks, written work and her extensive efforts. 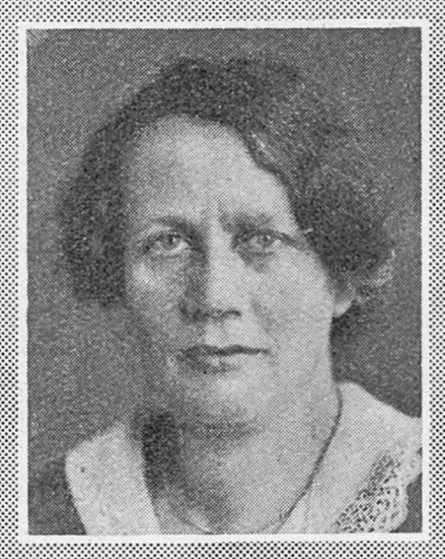