Queen Lovisa Ulrika was one of the most prominent Swedish figures of the 1700s, within political, literary and artistic spheres.

Lovisa Ulrika was born in Berlin in 1720. She was the daughter of the Prussian royal couple, Fredrick William I of Prussia and Sophia Dorothea of Hanover. She grew up in a large family of which four brothers and five sisters survived into adulthood. Through their mother the children had access to an intellectual and literary inheritance within which especially their paternal grandmother Sophia Charlotta of Hanover served as a role model. Their upbringing and education was in the main dominated by descendants of the Huguenots who had held prominent positions at the Prussian court for several generations. Thus Lovisa Ulrika had a solid foundation in French literature and artistic traditions from an early age. One element of German princely educational tradition – which had been fostered by Sophia Charlotta and her own mother Sophia of Pfalz – was an interest in theological and philosophical issues and Lovisa Ulrika was similarly taken with them. The accession of her brother, Fredrick II, to the Prussian throne in 1740 led to a blossoming of culture and learning in Prussia, following their father’s strict utilitarian-based regime. Lovisa Ulrika became acquainted with the eminent figures of science and enlightenment who were summoned to Fredrick II’s court, including Voltaire and the natural scientist Pierre Louis Moreau de Maupertuis. At the same time her brother’s military successes only confirmed Lovisa Ulrika’s understanding that military actions and war were central to the role of ruling.

Several potential marriage candidates were mooted for Lovisa Ulrika but nothing came of them. She was then appointed co-adjutrix of Quedlinburg abbey – a position which her daughter Sofia Albertina would later hold. However another marriage proposal arrived at Lovisa Ulrika’s door, this time from Adolf Fredrik of Holstein-Gottorp, the princely bishop of Lübeck who became a successor to the Swedish throne in 1743. They married in 1744 as part of a plan for a never implemented tripartite alliance between Russia, Prussia, and Sweden.

Lovisa Ulrika’s life with Adolf Fredrik was a happy one. Historiography usually portrays Adolf Fredrik as a weak-willed and unimportant individual. However his role within the political, cultural, and military spheres remains insufficiently researched. There is a lot of evidence that he and Lovisa Ulrika shared the same goals, albeit divided into distinct roles – they worked together as a princely ‘team’. Adolf Fredrik dealt with military issues, including the major defensive constructions begun in Sweden during the 1740s. Lovisa Ulrika became a patron of the belles-lettres, historical and linguistic matters, and both of them strove to fulfil their roles as ideals of the princely master builder and patron of the arts and sciences. Their collaboration included dynastic and political strategising. Lovisa Ulrika’s brother Fredrick II was an important personal element of her political activism – her first task from her brother was to promote a Swedish-Prussian alliance. She, for her part, unsuccessfully sought his support in changing the Swedish form of government. Having been brought up in a militarily influenced absolutist realm she found parliament’s defining influence in Sweden as divergent from the order viewed as determined by nature. From an early point she made it her primary political goal to increase royal power.

Following his arrival in Sweden Adolf Fredrik kept clear of party politics. Lovisa Ulrika had immediately allied herself to the ‘hattparti’ (hat party) and convinced Adolf Fredrik to take a stance. Carl Gustaf Tessin, the leading politician of the hat party, was appointed marshal of the realm at their court and contributed to its cultural cachet. Lovisa Ulrika sought to crush Russia’s influence and successfully did so at the 1746–1747 parliament, at which Adolf Fredrik was appointed ‘generalissimus’ and an alliance was agreed with Prussia. This period can thus be seen as the most successful point in Lovisa Ulrika’s political manoeuvring. Her first child Gustav (later King Gustav III) was born in 1746, followed in 1748 by Karl (later King Karl XIII), Fredrik Adolf in 1750, and Sofia Albertina in 1753. Her successful pregnancies contributed heavily to the popularity that Lovisa Ulrika and Adolf Fredrik enjoyed in this period.

However it was not long before conflict arose between Lovisa Ulrika and the ‘hat’ party, partly due to the engagement of Prince Gustav to the Danish princess Sofia Magdalena which went against Lovisa Ulrika’s and Adolf Fredrik’s wishes. By the time of Adolf Fredrik’s coronoation in 1751 the ‘hat’ party’s formerly impolied support for increasing royal power was completely absent. Now a third party emerged in support of Lovisa Ulrika and Adolf Fredrik, the so-called ‘hov parti’ (court party). Lovisa Ulrika's efforts still centred on the actual means of government – indeed, her causes were often aligned with the ‘hat’ party policies. She was, however, unsuccessful in her attempt at winning over the leading proponents of the ‘hat’ party to her own ‘court’ party. These conflicts also led to a rupture in her friendship with Tessin, who had hitherto been an important political ally, played a central role in court life, and served as private tutor to the Crown Prince.

Further obstacles arose as a result of the 1755–1756 parliament. Adolf Fredrik’s political impotence increased and the estates – who suspected that the Crown Prince had been brought up in what they viewed as a politically inappropriate fashion – replaced his tutor and instigated changes to his care against his parents’ wishes. The idea of a coup d’état began to emerge, but became exposed early enough for the main plotters to be apprehended and for eight of them to be executed. As a result an act was passed which closely resembled a temporary removal of the royal couple. Lovisa Ulrika has largely been seen as the main instigator behind the attempted coup d’état and it is indisputable that her plans were extensive. Adolf Fredrik’s role is less clear. There was, however, an interest in presenting the king in as innocent a light as possible. Adolf Fredrik was popular and to either humiliate or punish him would have been damaging to Sweden’s reputation. At the same time an image was created implying that he had been misled by his wife who, according to the reigning ideology of the time, was supposed to obey and submit herself to him. The image of the king being controlled by the queen risked undermining his credibility as a ruler and thus of any future attempts to strengthen royal power. Yet another result of the estates’ manoeuvres with regard to the royal couple was that the queen’s political machinations became more visible than she had intended.

Lovisa Ulrika became politically isolated over the ensuing years. In 1762 a new opportunity for involvement arose when she was invited to play a role in the Prussian peace negotiations following the end of wars which had begun in 1757. In a concessionary move the parliamentary act and various other items relating to the attempted coup were cancelled. Lovisa Ulrika strove to achieve a change in relations between the ‘hat’ and ‘cap’ parties but despite intermittent positive exchanges this was never achieved.

Adolf Fredrik died in 1771 and Lovisa Ulrika mourned him deeply. Later that same year she did however travel to Berlin, meeting up with her family for the first time since she had left and participating in the intellectual life of the capital city in her brother Fredrick II’s kingdom. It was while she was in Berlin that she learned of the revolution led by Gustav III. Thus, it can be said that Lovisa Ulrika’s political efforts finally came to fruition and she was overwhelmingly in awe of her son’s achievement. Nevertheless, it was not long before differences of opinion emerged between the two of them. An important element in this was apparently Gustav III’s political need to distance himself from her – he could not be seen, as his father had been, to be dependent on a woman’s influence. Their personal relationship had been complicated for a long time and it suffered a complete rupture a few years later.

Drottningholm palace remains the primary surviving memorial to Lovisa Ulrika which she herself came to bear upon. She retained the palace’s main characteristic as a monument to Sweden’s age of great power whilst the rooms which were furnished for her gatherings displayed her activities within the spheres of the arts, sciences, and belles-lettres. These reflected her personal interests whilst providing prestige and forming part of the established early-modern princely roles. Lovisa Ulrika was also influenced by the enlightenment ideas on princely collections as serving a wider purpose. She also served as patron to several artists and authors. In 1753 she founded Kongliga Svenska Vitterhets-academien (The Royal Swedish Academy of Letters, History and Antiquities) in the intention of encouraging the development of the Swedish language, historical research, and eloquence. The academy transmitted her cultural interests from the court into the public sphere. She did not shy away from serving as an authority within the sphere of the academy in a manner which at that time was remarkable for a woman.

The art of theatre was of central significance to courtly culture and the Drottningholm palace theatre was thus an important aspect of the representative function of the enterprise. Italian opera series were performed by well-known Italian singers, a troupe of French singers, dancers, and actors were hired, and the members of the court even performed as well. Another prominent element of the Drottningholm environment is the Kina (Chinese) palace, in itself a unique example of a comprehensive 1700s-milieu with a unifying Chinese theme. Further, there was the manufacturing town of Kanton, also known as Drottningholms Hall- och Manufakturrätt, where high-quality textiles and iron was worked and produced. The queen was also very keen on utilitarian cultivation, arable farming, and tree-planting at Drottningholm and thereby manifested her interest in the at that time important subject of land improvement.

There was consensus between the political elites and the royal couple that it was desirable for the royal family to serve as protectors of science, the arts, and belles-lettres, as well as contributing to the image of Sweden as a healthy and culturally high-ranking kingdom through the undertaking of building works and commissions. To Lovisa Ulrika politics remained the main sphere of activity and that was where she believed she fulfilled her actual duty as queen of Sweden.

On her deathbed Lovisa Ulrika was reconciled with her son Gustav III. She died at Svartsjö castle in the summer of 1782. She is buried in Riddarholm church. 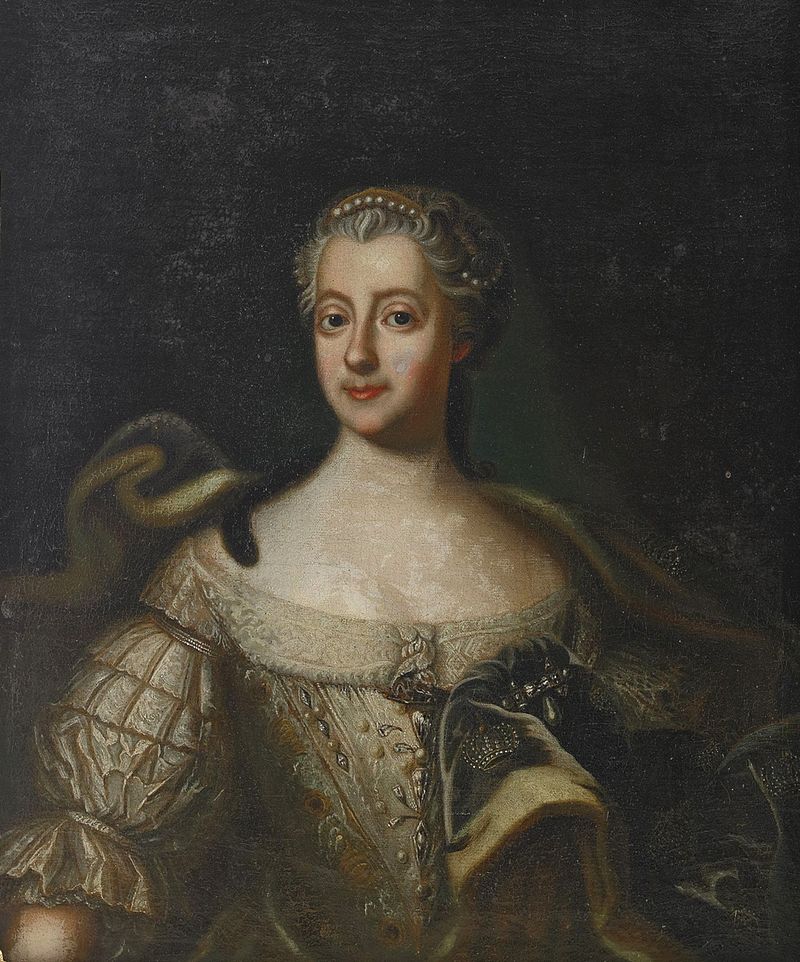