Lucie Lagerbielke was a controversial and widely-read author of articles, written works and books within a field which is today known as Western esotericism.

Lucie Lagerbielke was born in Stockholm on 13 April 1865. She was the third child born in a family numbering four siblings. Her parents were Lars Olsson Smith, a wholesale merchant also known as ‘the king of spirits’, and Marie Louise Collin. Although she belonged to Stockholm’s upper class her parents originally hailed from more humble backgrounds. Her father made his wealth by selling alcoholic drinks, but he was also active within social reform. Further, during the period of 1885–1891 he served as a parliamentarian of the first chamber in the Swedish parliament. Her mother was the illegitimate daughter of a fishwife, who had been adopted and raised by the family of the dentist to the royal Swedish court.

Lucie Lagerbielke’s eldest brother, Charlie, was an engineer and an inventor who worked in the stone industry. Her brother, Otto, gained a political science degree in Tübingen in 1886 and subsequently joined his father’s business. Otto was also a collector and a donor. Lucie Lagerbielke’s younger sister, Mary Karadja, shared her artistic and spiritual interests. The sisters received a traditional upper-class education, initially tutored at home by a governess and then sent to finishing schools in Switzerland, France, and Italy where they focused on languages, drawing, embroidery, and music. Lucie Lagerbielke’s education did not, however, fulfil her thirst for knowledge for which she later found expression. Due to her lack of academic qualifications Lucie Lagerbielke felt like an outsider, a feeling she later exploited when engaging polemically in the press with prominent psychologists such as Sydney Alrutz and Poul Bjerre. Lucie Lagerbielke expressed herself from the perspective of her own self-defined position of spiritually-based authority – practically unrecognised by scientists to whom she nevertheless considered herself superior.

When Lucie Lagerbielke was 18 years old she married Baron Henrik Lagerbielke, a naval captain, in a marriage which made her one of the richest women in Europe. Her in-laws never fully accepted her into the family. That she subsequently adopted a strong opposition towards the church, and was strongly in favour of socialism, combined with her critical stance towards the nobility, doubtless contributed to this complicated relationship. Her marriage was apparently a happy one and was blessed with the addition of two daughters, named Ebba and Nina. Henrik Lagerbielke’s work meant that the family frequently travelled and spent lengthy periods living abroad, including in Italy. Following the death of her husband in 1906 Lucie Lagerbielke largely distanced herself from her in-laws.

Lucie Lagerbielke and her sister Mary Karadja apparently enjoyed a good relationship albeit it was a complicated one. Mary Karadja was a spiritualist and a medium who was known internationally whilst Lucie Lagerbielke expressly distanced herself from the spiritualist sphere which she considered to be spiritual rot. She had several reasons for thinking this: it was ethically and religiously wrong to seek to make contact with the dead, the sphere frequently involved frauds, and primarily it was dangerous for people who lacked the requisite knowledge to, out of mere curiosity, delve into powerful forces that were beyond their comprehension. Lucie Lagerbielke considered her sister to be an example of the danger of spiritualism. Over time the sisters also adopted completely separate political beliefs, Lucie Lagerbielke turning towards socialism and Bolshevism, whilst Mary Karadja became politically pro-Nazi.

Lucie Lagerbielke claimed to have belonged to an esoteric school since the late 1800s and, according to her own accounts, she had considerable supernatural or transcendental experiences. She referred to these experiences as psychological skills and repeatedly described them. They formed the basis for Lucie Lagerbielke’s perspective on reality, her philosophy, and her life’s work. Her written output emphasises the importance of a scientific approach and she claimed to have had empirical ambitions since childhood.

Lucie Lagerbielke placed high value on psychic research (later known as parapsychology). This research was to contribute a new type of knowledge about people and the laws of life and had the potential to change people’s life conditions. In her publications and in her letters, Lucie Lagerbielke describes clairvoyance, hypnotism skills, and how she undertook psychic experiments with sleep-walkers. She also ran surgeries which were said to have “a very large clientele amongst the nervous ladies of society”, both in Stockholm and in Copenhagen, as noted at one of the Swedish Medical Association meetings in 1913.

Lucie Lagerbielke published around 20 books, publications, and innumerable articles. In 1899 Lucie Lagerbielke published an early work, using what became the frequent pseudonym of Vitus: Något om nervositet och naturkrafter: Om orsaker till en del nervös oro, hetta o.s.v., rumsångest, platsångest, och paralysi, samt hänvisningar till enkla – mångårigt pröfvade – skyddsmedel deremot. This was followed by two books written using the pseudonym of Pax: Lifvet och döden, published in 1903, and Strid och frid, from 1904. A couple of her early books were co-written with her friend Anna Maria Roos, who later became a theosophist and went to work with India’s poor and ill. Using the pseudonyms of Carl Melcher and Tor Delling the two women published Vägen: skriftserie in 1905, which included “Människans sanningsmedvetande”, “Tro’ – och tro” as well as “Bönens sanna värde”. Then, under the names of Christina and Wilhelmina Terner, the women published a novel entitled Drömmen: En sällsam berättelse, published in 1908. The latter appears to be a declaration of Lucie Lagerbielke’s and Anna Maria Roos’ views regarding both spiritual and marital issues. One of Lucie Lagerbielke’s most noted books, Själens liv: en bok tillägnad de ensamma, from 1911, received a blistering review from Poul Bjerre, initiating a public spat between the two in the press which lasted from 1911–1912. Lucie Lagerbielke had a high profile and appeared in interviews and had articles published in the daily press. During the 1919–1922 period and again during 1924–1925 she also published a series called Framtidens Folk: tidning för andliga problem, psykisk forskning och social nydaning in which the majority of the articles had been penned by her. In 1920 she also founded the association of “people of the future”: Framtidens Folks Förbund (FFF).

In 1917 Lucie Lagerbielke was inspired by the priest Fredrik Spak and the agitator Kata Dalström to take a stand on the Russian Revolution. Lucie Lagerbielke did not see any contradiction between socialism and religion but rather considered socialism to be the closest achievable form of true Christendom in this time period. In Vem vågar? from 1917, “Skandal!” from 1918, Vem har rätt? from 1918 and Gott och ont from 1919, and in articles for the Folkets Dagblad Politiken newspaper she expressed her desire to be able to leave the state church, and that the state church should be separated from the state just as schools should be separate from the church. She called for a new form of pedagogy based on socialist principles. In 1919 Lucie Lagerbielke wanted to change religious education to combine it with a new child-rearing programme based on those same socialist principles. Children should be encouraged to develop solidarity and friendships. Further, Lucie Lagerbielke predicted in 1919 that Swedish society and its population would be reformed within the space of three years: by 1922 Sweden would be a constitutional republic, the army would no longer exist, and property would have been redistributed. Indeed “the sacred side of life would be illuminated, people’s spiritual lives would be clarified, whilst increased value would be placed on life.”

The last years of Lucie Lagerbielke’s life were spent suffering ill health. She died on 16 May 1931 and is buried at Norra begravningsplatsen (the Northern cemetery) in Solna. The funeral monument at her grave comprises a representation of her, seated and naked, with her gaze turned heavenward. The engraving reads ad astra (towards the stars) whilst under her name is noted “Förf Vitus”.

Lucie Lagerbielke was forgotten for a long period but has recently returned to public attention with reference to the visual art she produces. Some of her works have been displayed at the 2013–2014 Mod och modernitet and the 2019–2020 Måleri och andlighet: Hilma af Klint, Tyra Kleen, Lucie Lagerbielke exhibitions held at Millesgården at Lidingö. 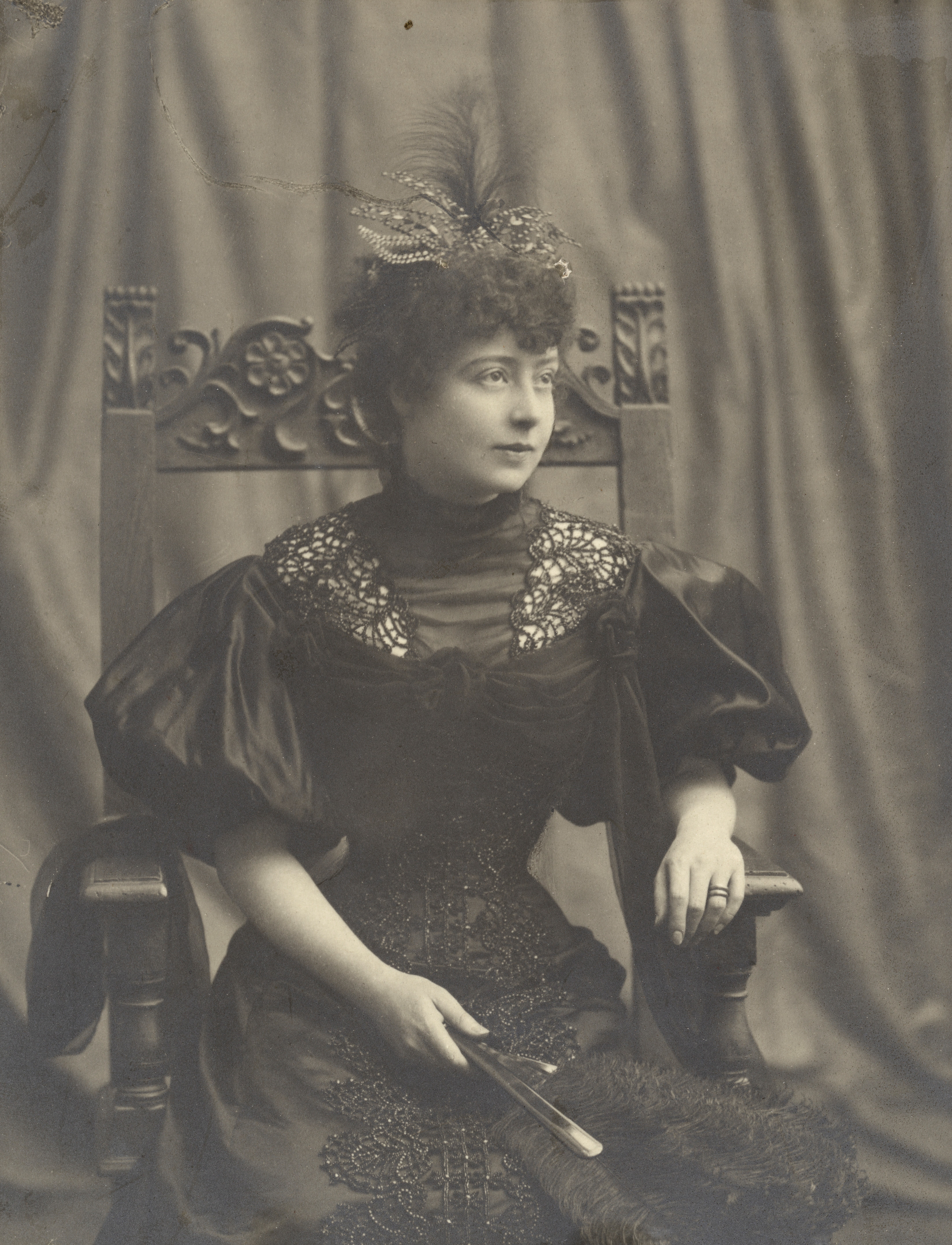