Lydia Hedberg was a much-loved singer-songwriter. Under the name Bergslagsmor (Bergslagen mother) she became very acclaimed, not least among Swedish descendants in the USA and Canada in the 1920s.

During her concert tours as Bergslagsmor, Lydia Hedberg performed mostly wearing a folk costume from Dala Floda. However, she was actually from Falun. She was born there in 1878 as the third child of the furniture manufacturer Karl Pettersson and his wife Maria Lovisa, née Briandt. The Pettersson couple had three more children. Their daughter Gerda married Sam Lindskog who ran a house-furnishing shop in Falun. One son died of diphtheria at the age of two. The youngest child, Emanuel, took his mother’s surname Briandt and became a track engineer in the state railway company, Statens Järnvägar (SJ).

Lydia Hedberg attended the girls’ school in Falun and decided to become a physiotherapist. After studies in Stockholm and Germany, she opened her own massage institute in her home town of Falun. In 1904, she married a childhood friend, the newly qualified mining engineer Torbjörn Hedberg. He had arrived in Lindesberg in 1903, to which Lydia Hedberg had also moved. During his first year in Lindesberg, Torbjörn Hedberg became a part-owner of a new company with the speciality of buying up old machines and boilers to renovate and then resell them. The enterprise was however never to be profitable. It went bankrupt after only two years. The bankruptcy felt hard. The relationship between the Hedbergs also deteriorated. Since their son Olof had been born in 1905, she had started to work as a physiotherapist for the city physician Herman Wahlström in Lindesberg. She was also ever more in demand as a folksinger.

The seed to Lydia Hedberg’s career as a folksinger was sown in 1908 at a private party at Hermanstorp farm, where the Hedberg family then lived. She was persuaded to perform a few songs and surprised the friends present with a vibrant soprano voice. Later she and her friend Alma Grönfeldt were engaged by restaurant keeper Andreas Johansson for a few “evenings of jollification” at the Lindesberg city hotel. After that, Lydia Hedberg was often engaged as an entertainer at folksong evenings, association meetings and other public arrangements. She continued in the meantime to attend to Wahlström’s patients.

The Hedbergs separated in 1910. Lydia Hedberg returned to Falun with their son Olle. She had been attracted by the life of an artist and the same year was given the chance of performing at the great spring festival at Skansen in Stockholm. Her performance was not an immediate success since she was shy and nervous in front of the crowds of people. However, she soon had several more performances in Stockholm as well as the rest of the country, where she entertained the audiences with a mixture of folksongs and funny stories. Just before the first world war, Lydia Hedberg also undertook concert tours to Norway and Denmark. She started using the artist name Bergslagsmor at that time.

When the Swedish-American Swedish Choral Club choir made a highly acclaimed tour around Sweden in 1920, Lydia Hedberg became interested in making a similar concert tour in the USA. She had probably also been inspired by the trip made by the folksinger Delsbostintan, Ida Gawell-Blumenthal, in 1908 among the Swedish-Americans in the USA.

Lydia Hedberg was given addresses to Swedish-American concert arrangers by a friend, but everyone advised her not to travel to the USA. Many believed namely that the Swedish descendants had become so Americanised that they were no longer interested in Sweden. The editor of the newspaper Vestkusten, Axel Olsson in San Francisco, was however positive and encouraged her to have a try.

In January 1921, Lydia Hedberg travelled in the passenger vessel Drottningholm from Gothenburg to New York. It was however very difficult to find engagements in that big city without contacts, and she therefore travelled on further to relatives in Boston. There, Lydia Hedberg was able to do a number of concerts and she also came into contact with the Swedish-American Harmoni choir. One of its members, C A Lindström, became her manager, and he saw to it that suitable party and concert organisers round about in the USA booked a visit from Bergslagsmor.

That was the beginning of a long concert tour that received a great deal of attention and that would carry Lydia Hedberg through the Swedish settlements in Minnesota, Michigan and Wisconsin and from there on to among other places Oregon, Washington and California on the west coast. During the year that Lydia Hedberg spent in the USA, she gave more than 100 performances, most of them sold out.

The concert organisers who had refused to work with Lydia Hedberg before her USA trip were thus proved completely wrong. The Swedish descendants who had had such difficulties in keeping in contact with their old homeland on account of the first world war now queued to listen to Swedish artists. Bergslagsmor, who always performed in a light and happy tone in her folk costume from Dala Floda, soon became very popular. Her songs and stories often had a melancholy undertone, and it was namely this that awoke a nostalgic response from her audiences.

Lydia Hedberg had mostly older folk songs in her repertoire like “Du Sveriges bygd”, “Korpral Kanon” and the old Bergslagen melody “Min egen lilla sommarvisa”. She had also written down and rearranged half-forgotten songs that were now once again heard by audiences. One of these, the humorous “Avmagringskuren”, was particularly appreciated and would become with time something of a signature melody for Lydia Hedberg. A relatively new melody, included in most of Lydia Hedberg’s concerts, was the extremely sentimental song about the home of one’s childhood: “Barndomshemmet”. It awoke old memories from Sweden to life in the audiences, of course. During one concert, Lydia Hedberg was suddenly interrupted by a woman who shouted: “Sing ‘Barndomshemmet’ one more time, Bergslagsmor, I need to cry!”

Lydia Hedberg’s first USA journey ended with a number of farewell concerts in Chicago, Boston and New York. She also had time to visit Washington DC and have a chat with President Harding. Back in Sweden, she discovered that her successes in the USA had even made her famous back at home. She therefore had many new engagements.

Lydia Hedberg was to undertake two more concert tours in the USA, the last being in 1925. The same year, she published a book about her experiences in America. She gave it the title Reseminnen från USA and it can still be found in well-supplied antiquarian bookshops. She did not travel to the USA again, despite still being very popular among Swedish Americans. The reason was that several competitors had turned up in the Swedish settlements, among others the bucolic comics Bert Leman and Hjalmar Pettersson, who performed under the name Olle i Skratthult.

At the end of the 1920s, Lydia Hedberg often performed at folk music festivals, charity galas and similar events in Sweden. She also sometimes participated in entertainment programmes on Swedish Radio. The Swedish radio broadcasts, that began in 1925, consisted of only one channel and took place in the evenings, for a few hours only. Broadcasting time for lighter entertainment like Bergslagsmor’s folksongs was usually only 20 minutes.

In the 1930s, Lydia Hedberg cut down on her appearances in connection with moving to Sundsvall. Her son Olle had trained to be an engine driver and been stationed first in Harmånger and later in Sundsvall. She did however give occasional performances in southern Sweden. It may be mentioned as well that Lydia Hedberg was the hostess for the summer programmes at Gammelgården in Furuviksparken south of Gävle in the late 1930s.

Lydia Hedberg is most known for her songs and story-telling. However, she should also be honoured for preserving a great number of old folksongs that would otherwise probably have been lost. In the songbooks preserved from Bergslagsmor’s life as an artiste, there is an enormous treasury of songs, among others the texts to about twenty melodies that Lydia Hedberg herself wrote down or composed.

It is also possible to find a few gramophone records on which Bergslagsmor performs her best known songs. The first recordings were made in 1915—1919 and consist of old folksongs like “Kärlekens besvärligheter”, “Landsvägstrall” and “Granbackavalsen”. On her visits to the USA, she also had the opportunity of recording “Avmagringskuren”, “Tandvärken” and the unbelievably popular “Jag såg mot öster, jag såg mot väster”. There are also recordings from August 1930 made by the Odeon record company. On these, one can hear Lydia Hedberg sing “Lappflickan”, “Vid Siljan är mitt hem” and several other songs.

Lydia Hedberg died in Sundsvall in 1964. Her death was noted in most Swedish newspapers. Many years had passed since she was active as an artiste, it is true, but she was still a well-known and admired person round about in Sweden. She lies buried in the Kristinehamn Old Cemetery. 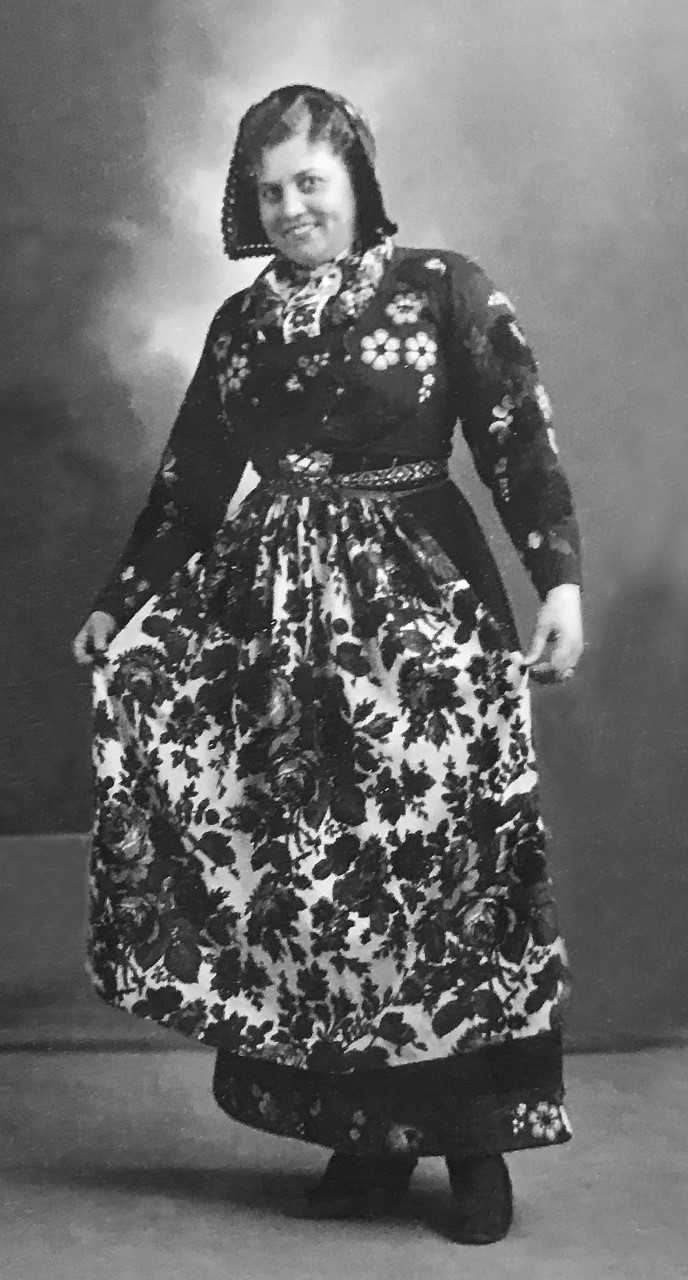