Lydia Lithell was an author and a composer. Her spiritual songs were widely disseminated and several are still in use, particularly during funeral services.

Lydia Lithell was born in Kumla in 1909. She grew up in Kumla and remained resident there throughout her life. She herself has recounted how her father, Gustaf Engvall, often sang whilst playing guitar or the organ. He was a linguistically talented man who spoke several languages and could read the New Testament in Greek. He ran his own painting company and would spend his spare time helping to run the local Baptist congregation. Her mother, Ida Engvall née Larsson, also had a good singing voice. She is described as a colourful, open, and happy individual whose personality characterised Lydia Lithell’s childhood home. Lydia Lithell inherited her talent for singing and her interest in languages, as well as her interest in the free church congregation, from her parents.

Lydia Lithell was baptised into and became a member of the Baptist congregation in 1925. On gaining her school-leaving qualifications in 1926 she then worked in a bank office and as a cashier at a shoe factory until she married Daniel Lithell in 1938. His family were in business and he shared his new wife’s interests. He often sang solo at various gatherings and the songs were often his wife’s compositions.

Lydia Lithell had learned to play the organ when she was in junior school and shortly thereafter also learned to play the piano, following the acquisition of a piano for the family home. Further, she learned to play the guitar, the accordion and the fiddle. She wrote her first song when she was 18 years old. In 1931 Lydia Lithell became the congregation choir master and two years later she set up a mandolin orchestra and a so-called string music group to play somewhat more folk-inspired spiritual songs. The latter of these groups she conducted right until the end of her life. In 1951 she instigated the forming of a girls’ choir. During the 1950s Lydia Lithell felt the need to deepen and renew her creative force and she took lessons with cantors in Kumla congregation. She continued her studies in Lund and in 1954 gained her qualifications as an organist and cantor.

Lydia Lithell primarily wrote and composed songs for the various singing groups in her own congregation. However, she was soon asked to provide songs for other congregations, at youth camps, and at larger Christian gatherings. It wasn’t long before her songs gained wider distribution. During the 1950s she and her family made a lot of singing trips, appearing at many different places during religious services and meetings. She also appeared at some of pastor John Hedlund’s ecumenical campaign meetings. Some of her work was recorded and then played on the radio, which helped to make her songs better known. She also translated and made new arrangements of old songs, sometimes mixing her own and other’s songs together. It is said that she wrote between 200 and 300 songs, albeit some of these only exist as poems noted in her diaries and notebooks. Many of her songs were printed separately. 20 of her children’s songs can be found in Kvivi-vitt: Barnsånger av Lydia Lithell, which has no date of publication. 43 of her best-loved songs are collated in a songbook from 1958 entitled Jag har hört om en stad: Ett urval av Lydia Lithells sånger.

Like most of her work, her children’s and her youth songs were often simple in nature and somewhat folk-inspired, as befit the revivalist tradition. Indeed, her themes were also influenced by that tradition, with motifs of Jesus, heaven, grace, and the missionary task. Some of her songs also incorporated contemporary elements in their texts and melodies and nowadays these are hardly sung. Yet others have become ‘classics’ of the spiritual song corpus. This is particularly true of “Jag har hört om en stad ovan molnen” from 1947. The Lithell family had heard the Don Cossacks sing a Russian folk tune called Entonigt klingar den lilla klockan in Swedish at a concert held in Örebro. The tune captivated Lydia Lithell and one day as she sat at her sewing machine the text came to her, which she then noted down, feverishly inspired. According to studies undertaken in 1966 and 1976 this song remained, for a long time, the most commonly performed solo song at funerals in both the Swedish Church and in the free church. The song also became internationally known thanks to a wide range of translations. Another of her songs which is still frequently used at funerals is “Flyttfåglarna”.

The one of her songs that is most frequently performed nowadays, both as a solo song and as a congregational song, is “Det enda jag vet, det är att nåden räcker”. This was the second-last song she ever composed and it was written from her sick-bed, shortly before she died of cancer in the autumn of 1957. Lydia Lithell is buried at Kumla cemetery. 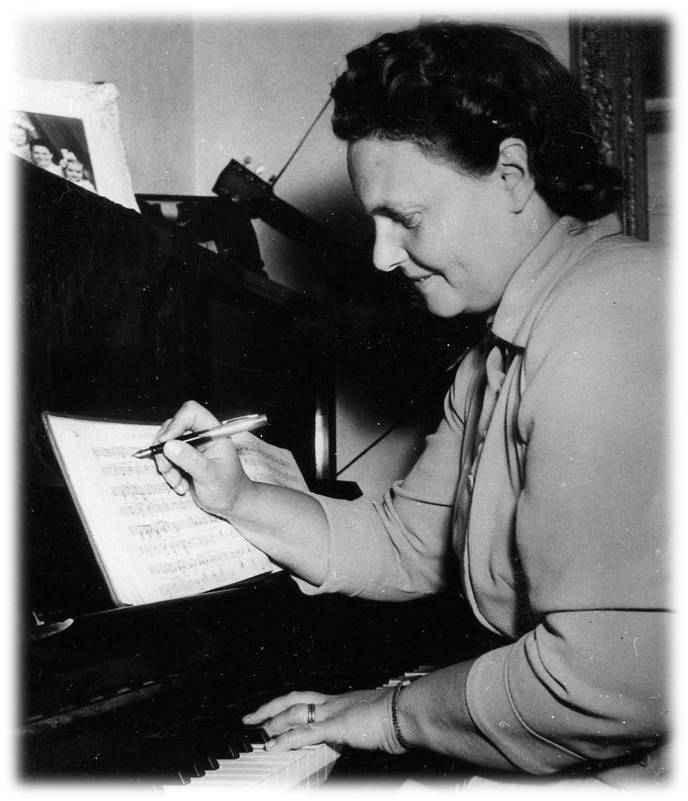