Magda Julin was the leading Swedish figure-skater of the 1910s and won the Olympic gold medal in Antwerp in 1920.

Magda Julin was born in the French spa town of Vichy in 1894. Her mother, Anne Marie Roux, was a French woman who had met Carl Henrik Edvard Mauroy, her future husband, in France. Magda Julin developed an interest in sport, initially in gymnastics, at an early age. This was as a result of her father’s role in running a physiotherapy institute in Vichy. Before Magda Julin entered her teenage years she and her family moved to Sweden where they settled in Djursholm.

Magda Julin joined the figure-skating section of Stockholms Allmänna Skridskoklubb (SASK) (public skating club of Stockholm) in 1908. The next year she entered her first competition in Skolungdomens mästerskap (the school children’s championship) and she won her event. She first competed in the Swedish championships in 1911, at which time she was 16 years old, and won. She repeated her success in 1916 and 1918. She won the silver medal in 1912, 1913, 1915, and 1917, and in three of these competitions she was beaten by Svea Norén.

The greatest success of Magda Julin’s sporting career came at the Antwerp Olympic Games of 1920. Although figure-skating had been introduced as an event in the London Olympics of 1908, it had not featured in the Stockholm 1912 Olympics. Thus Antwerp served as a re-introduction of the figure-skating event. Sweden submitted several skaters, both male and female, and of the six female competitors two were Swedish. Magda Julin won gold whilst Svea Norén got silver in a very even competition. They won their medals through impressive performances in the mandatory section of the event. It should be noted that Magda Julin was four months pregnant when she won her Olympic gold medal. She had just married the father of her child, a sea-captain named Per Johan Emil Julin.

Magda Julin carried on skating all her life, alongside her roles as a career woman and raising a family with two young children. In 1985, when she was over 90 years old – to the great delight of the press – she took a few steps on the ice-rink in Kungsträdgården, wearing a pair of skates which had been donated by the virtuoso skater Ulrich Salchow. Her very last performance on ice occurred in 1990 when she was 96 years old. She died that same year. 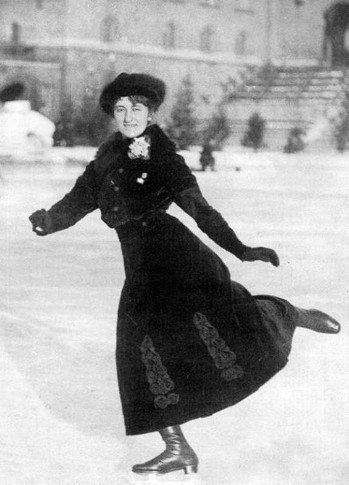